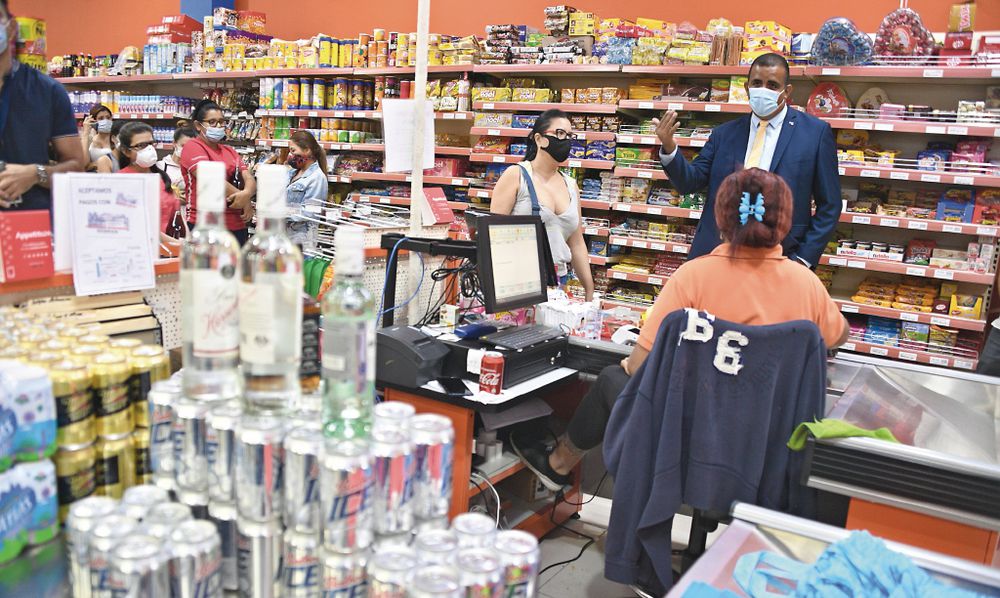 Mayors will follow the relaxation of the dry law – reluctantly

The debate on the dry law and its consequences is not only between the mayors and the President, but in society itself. Reluctantly, mayors begin to give in.

The gradual lifting of the dry law came with a categorical warning from the health authorities that if the control measures are not complied with, the total prohibition to sell and consume liquor could be resumed. Several Mayors were against the decision and even said they would not follow the order.


Last Friday, in a press conference, the Minister of Health, Rosario Turner, said that they will monitor the "faithful compliance with Decree 612", which establishes the flexibility of the dry law. She warned, bluntly, that if this measure is breached, "it will return to the total ban."

"We have asked all regional directors and medical directors to closely monitor the compliance with this decree," he said.

Jorge Quintero, director of the Authority for Consumer Protection and Defense of Competition (Acodeco), also made warnings to businesses to comply with the standard.

The Executive Decree 612, which was officiated 3:45 pm on Friday in the Official Gazette, allows in the municipalities, communities, regions or provinces, without a sanitary fence, the distribution, sale and consumption of alcoholic beverages.

Only six units of beer, a bottle of wine or one of liquor of any kind may be sold or dispensed per person. Restaurants offering home delivery, meanwhile, can only include one drink per order.

The use of the solidarity bond or any other subsidy granted by the State for the purchase of alcoholic beverages is prohibited. Likewise, the regulation establishes that the sale will only be for personal and household consumption, within the framework of the current mobility restrictions.

Among the provinces where sanitary fences are maintained are East Panama, Colón and Coclé.

The Ministry of Health (Minsa), Acodeco and the Ministry of Security, together with the National Police, will carry out operations to verify compliance with the decree. It must be remembered that the Minister of Security, Juan Pino, has defended the prohibition in the context of Covid-19, alleging, among other things, that the liquor causes people to get out of control and take it to the streets.


The Executive's decision is not well accepted by the majority of the country's mayors. They assure that they will comply with the decree, although they do not agree with it, and hold the President of the Republic, Laurentino Cortizo, responsible for any possible consequences of the relaxation of the dry law may have.

Julio Vivies, mayor of Montijo, Veraguas, and president of the Association of Municipalities of Panama (Amupa), in conversation with La Prensa said that they disagree with the measure and warned that legal advisors from Amupa and from different municipalities "are working to see what we can do legally".

He believes that liquor should not be marketed during these days. "We remain in our position that it is not the most correct decision," insisted Vivies, who, like Cortizo, is part of the Democratic Revolutionary Party.

In his opinion, this decree disavows the mayors. "The autonomy of municipal institutions is being lacerated ... We have a president who does not consult, who does not listen, who does not dialogue and who does not want to talk to local governments. Pressures and economic interests are worth more than the health and lives of citizens", he said.

Vivies is afraid of people's behavior. "Let's see what happens, whether or not it increases the irrational behavior of citizens, domestic violence, violation of non-circulation decrees, contagions, whether or not the curve flattens."

It is not the first time that local governments have demanded something from Cortizo. Last year they asked $20,000 for each mayor to celebrate the Christmas and Mother's Day parties, which generated much criticism. In addition, in recent weeks they have asked the central government for support in the face of falling revenues. In some cases, they allege that the funds are not enough to pay the return.

Samid Sandoval, mayor of Santiago, supported Vivies' position and said that although the decree will apply, the Government did not analyze the situation in his municipality, since most of the cases of Covid-19 in Veraguas are in that district. Sandoval had issued a decree establishing the dry law until June 7. Now he discusses with his lawyers what to do.

Boquete Mayor, Joswar Alvarado, who had issued a mayoral decree this Friday announcing that he would keep the law dry until the state of emergency lasted, said yesterday that he also consults with lawyers. He acknowledges that his decision is unsupported by Executive Decree 612. “We are respectful of the laws and we will ensure that it is complied with, but it has been a blunder for the country to allow the dry law to be removed. What we need is to safeguard the people in their home in a good mental state", he said.

According to Alvarado, they have not received help from the Government and that he does not know, if they will be assigned police officers or more officials, "because the municipalities do not have the resources to face the large number of complaints – and complaints will keep coming."

In this regard, Executive Decree 612 states that municipalities that, for administrative or economic reasons, have difficulties in complying with these measures, "must coordinate with the Ministry of Government and with the Ministry of Decentralization, what is necessary for their implementation and execution".

The leadership of the General Autonomous Central of Workers of Panama, led by Nelva Reyes, also considered that it was a not a responsible decision from the Government, especially because the bonus or aid has not been delivered, even to people with suspended contracts.

The World Health Organization has stated, that "among other things, that the effects of alcohol generate various health conditions that would contribute to increasing cases of people in health facilities, as well as cases of depression and anxiety. These situations should be avoided, as there is already enough demand in hospitals for cases with Covid-19”.

For his part, the mayor of Panama, José Luis Fábrega announced that he will abide by the President's decision, due to the fact that limited purchase is established in closed containers and moderate consumption at home.

Fábrega, unlike his colleagues, points out that the dry law has not had a major impact on infections and neither has it stopped crimes from happening. He believes that this discourages the marketing of unofficially sold alcohol drinks, such as chirrisco and chicha fuerte.

At the time, the Minister of Commerce and Industries, Ramón Martínez, said that "the sale of liquor has a low incidence on contagion", so the decision was made to gradually relax the dry law.


The relaxation of the dry law has also ignited a legal debate. There are those who consider that the mayors are unarmed before the President's measure, because Executive Decree 507 of March 24, which prohibited the sale and consumption of alcoholic beverages, was not eliminated, but was only modified. Others point out that mayors may try to pass municipal agreements and keep the law dry in their districts.

The Constitution establishes that the municipal authorities must comply with the laws, decrees and orders of the Executive, as well as resolutions of the judicial and administrative authorities.

Magna Carta, which establishes the function of the Municipal Council, indicates that municipal agreements have the force of law within the respective municipality.

"Here there is a clash of interpretation of the Constitution [...] the decision should have been made in an agreement with the municipalities," argued Professor Miguel Antonio Bernal.

A law, which covers general administrative procedures, establishes a legal priority structure, where the decisions of the President are above the municipal agreements or mayoral decrees.

The lawyer Ernesto Cedeño considered that although they do not like the President's decision, the mayors must abide by it.

The same opinion is held by Carlos Ernesto González, who quotes article 18 of the Constitution, "Individuals are only responsible to the authorities for infringement of the Constitution or the Law. Public servants are responsible for those same causes and also for overreaching functions or issuing them in the exercise of these."

For González, this means that “the authority cannot prohibit anything that is not by law. In the case of the so-called dry law, there is no law that gives that power to the mayors. ”