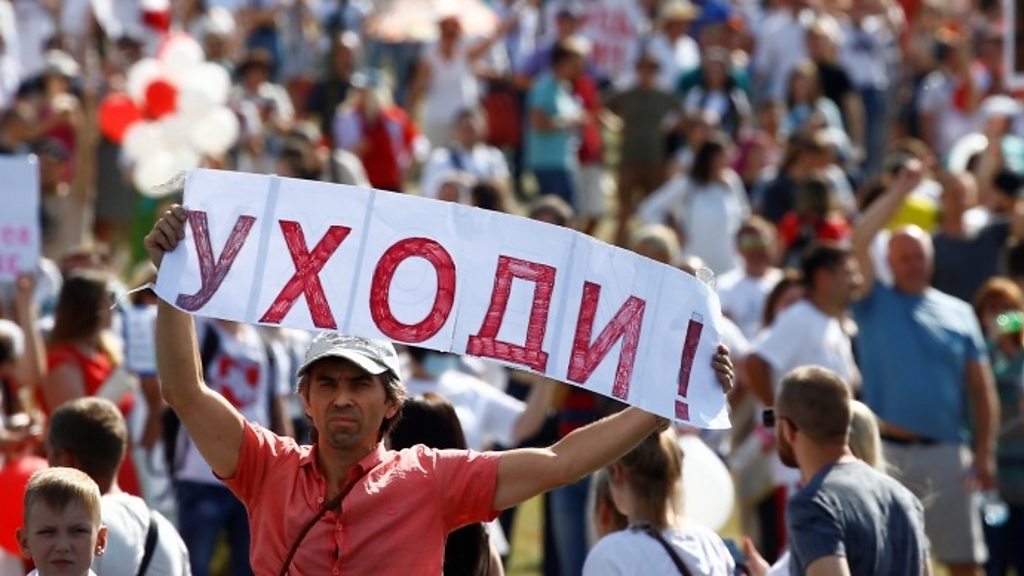 Tens of thousands of opponents of Belarusian President Alexander Lukashenko have gathered in Minsk to protest against disputed elections.

The "March for Freedom" in the centre of the capital comes amid growing anger over alleged poll-rigging and police violence at subsequent protests.

Meanwhile, in an address to a smaller crowd of several thousand, Mr Lukashenko blasted opponents as "rats".

He called on supporters to defend their country and independence.

The rival rallies were taking place after Russia agreed to offer security assistance in the case of external military threats to Belarus. It emerged that Mr Lukashenko had twice spoken to President Vladimir Putin over the weekend.

The long-time Belarus leader also voiced concerns over Nato military exercises taking place in neighbouring Poland and Lithuania and launched into a tirade against the Western military alliance.

Nato - who sent four battle groups led by Britain, Canada, Germany and the US to the Baltic countries after Moscow's annexation of Crimea in Ukraine - rejected allegations of a build-up in the region.

The unrest in Belarus erupted after Mr Lukashenko claimed a landslide victory in last Sunday's election, the result of which has been condemned amid widespread allegations of vote-rigging.

The Central Election Commission says Mr Lukashenko, who has been in power since 1994, won 80.1% of the vote and the main opposition candidate Svetlana Tikhanovskaya 10.12%.

But Ms Tikhanovskaya insists that where votes were properly counted, she won support ranging from 60% to 70%.

How will Russia respond?

Russian TV news bulletins have been making ominous parallels between Belarus 2020 and Ukraine 2014.

Six years on, could Russia's military intervene in Belarus?

On paper, at least, such a move would appear counter-productive. The opposition movement in Belarus is not anti-Russia/pro-Europe - it is anti-Lukashenko. If Russia were to send in troops to shore up the Belarusian leader, it risks alienating the Belarusian people and creating anti-Moscow sentiment.

True, Moscow is determined to keep Belarus within what it sees as Russia's sphere of influence. The Kremlin's ultimate goal is deeper integration with its neighbour - a fully-fledged union state (with Vladimir Putin at the helm). It could still achieve this through political leverage.

The Kremlin has a pathological fear of "coloured revolution" on its doorstep. But Minsk 2020 is not Kyiv 2014. Belarus is not choosing between East and West. The Belarusian people are outraged by the brutality of their security forces. So much so that even Mr Lukashenko's traditional base - including the state factory workers - are deserting him.

What is happening in Minsk?

Local media reports suggest that around 31,000 people took part in the pro-government rally, though the Ministry of Internal Affairs estimated that the number was closer to 65,000.

Speaking to supporters, Mr Lukashenko said he did not like rallies and did not need anyone to defend him. He said it was not his fault that he had to ask for their help. Rejecting calls for a re-run of the presidential election he said Belarus would "die as a state" if that happened. 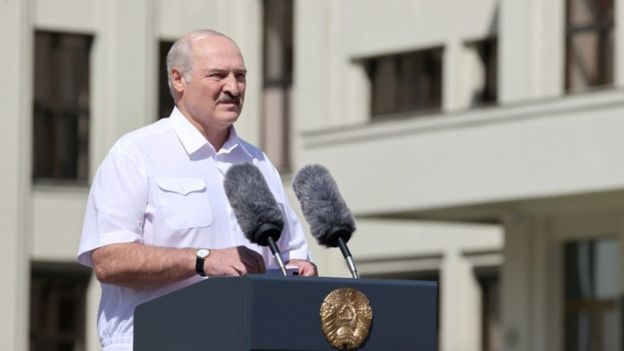 "You came here so that for the first time in a quarter-century you could defend your country, your independence, your wives, sisters and children," he said.

He added that the opposition would "crawl like rats out of a hole" if they were not suppressed this time.

"This will be the beginning of your end - you will go down on your knees like in Ukraine and other countries and pray, God knows to whom."

There were reports of state sector workers being forced to attend or face the threat of losing their jobs. For days, workers at state-run factories have staged walkouts and many have joined street marches against the president.

As the president spoke, around 220,000 of anti-Lukashenko protesters gathered near the Stela Minsk Hero City World War Two memorial in central Minsk, according to news website Tut.by.

They had answered a call for weekend rallies from Ms Tikhanovskaya. The opposition leader had gone into exile in Lithuania after she registered a complaint with electoral authorities and spent seven hours in detention.

"You are incredible, I love you", she said, before appealing to officials, security officials and judges.

"Guys, this is the last chance. Take the side of the good and the people. We are in the majority. We are power."

Supporters also turned out in other cities. The mayor of Brest was booed by protesters when he tried to speak to crowds. In Gomel, demonstrators removed the official flag of Belarus from the city's flagpole and replaced it with the red and white flag of the opposition. 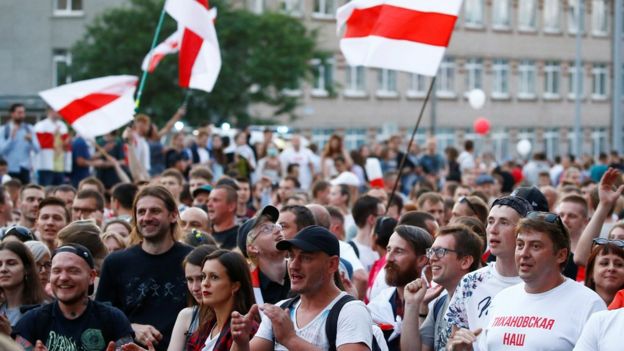 Belarusian footballer Ilya Shkurin announced he would not play for his country until President Lukashenko stepped down and then scored his first goal for Russian premier league team CSKA Moscow.

Mr Lukashenko said President Putin had promised to provide what he called comprehensive assistance in the event of external military threats to Belarus.

The two leaders had a second conversation on Sunday, in which the Kremlin said they discussed "the situation in Belarus, taking into consideration the pressure the republic was being put under from outside".

Russian TV may (for now) be sticking by Lukashenko, but there’s a lot of criticism on Russian news sites. Today one declares: “Lukashenko has lost. People won’t forget or forgive the brutal beatings & torture.” But could Moscow intervene? #ReadingRussia https://t.co/IHcGnV8llD pic.twitter.com/68CuJdFNXt

Mr Putin told Mr Lukashenko Russia was ready to assist Belarus "in accordance with the collective military pact if necessary".

EU foreign ministers agreed on Friday to prepare new sanctions against Belarusian officials responsible for "violence, repression and the falsification of election results". The US has also condemned the election as "not free and fair".

The prime ministers of three Baltic republics - Latvia, Lithuania and Estonia - later "expressed deep concern at the violent crackdown... and the political repression of the opposition by the authorities".

Lithuania and Latvia have previously said they are prepared to mediate in Belarus, provided the authorities stopped violence against protesters and formed a national council with members of civil society. They warned that the alternative was sanctions.

The leaders said the presidential election was "neither free nor fair" and called for a "transparent" vote "with the participation of international observers".

Ms Tikhanovskaya left for Lithuania following the election after she publicly denounced the results. She had sent her children to Lithuania for safety before the vote.

Some 6,700 people were arrested in the wake of the election, and many have spoken of torture at the hands of the security services.