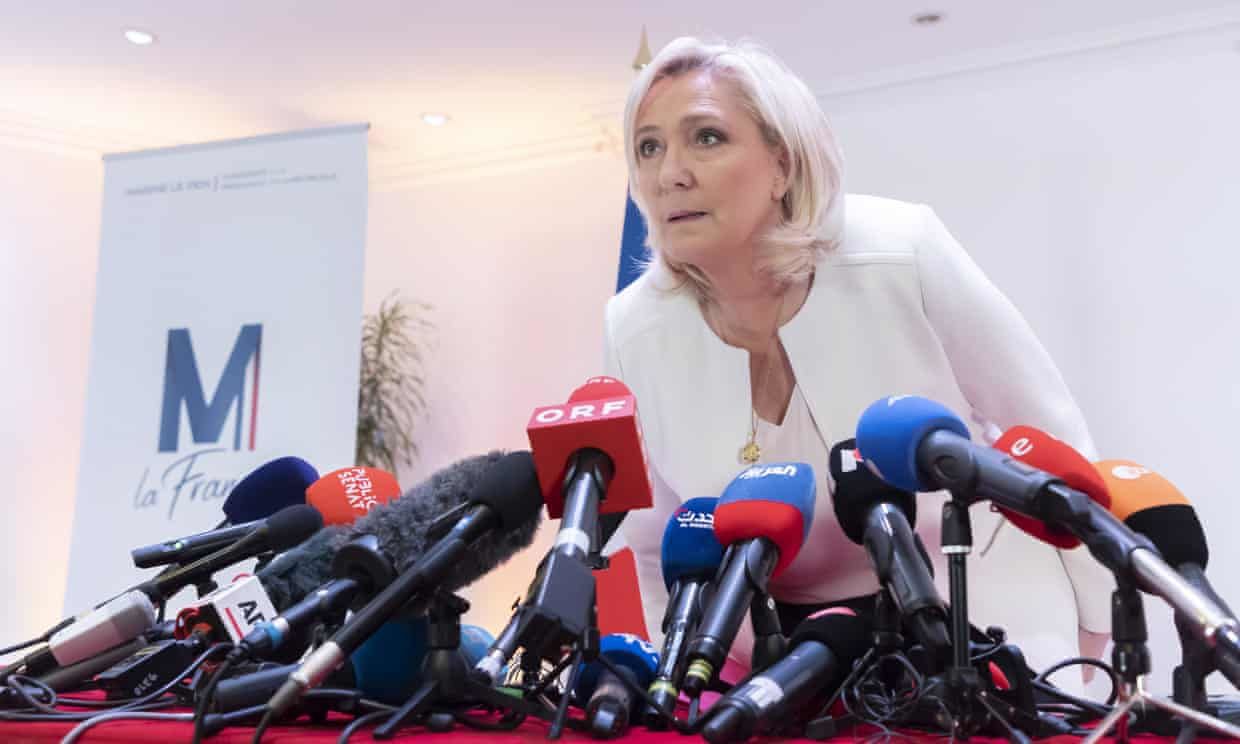 The French far-right presidential candidate Marine Le Pen has said that once the Russia-Ukraine war is over, she would propose closer links between Nato and Russia and pull France out of the military command of the US-led alliance.
“As soon as the Russian-Ukrainian war is over and has been settled by a peace treaty, I will call for the implementation of a strategic rapprochement between Nato and Russia,” she said at a press conference.

Le Pen, who is polling at 45% to Emmanuel Macron’s 55% for the presidential runoff vote on 24 April, called the press conference on foreign policy to try to take the spotlight off her previous close relationship with Vladimir Putin, which has led to claims from Macron that she was “complacent” and “financially dependent” on the Kremlin.

Le Pen said any talk of her betraying French interests or being indebted to Putin was “inaccurate and particularly unjust”.

As she spoke, a protester stood up holding a heart-shaped picture of Le Pen and Putin shaking hands at the Kremlin in 2017. The protester was tackled to the ground by security guards and dragged out along the floor.

In 2014, Le Pen’s party – then called the Front National, and since renamed National Rally – borrowed €9m from a Russian-Czech bank for local election campaigns. It is still paying off the loan.

Five years ago when Le Pen also faced Macron in the 2017 runoff, which she lost heavily, Putin hosted her at the Kremlin, posing for a handshake.

At the time, Le Pen declared admiringly that she shared the same values as Putin and that a “new world order” was emerging with Putin, Donald Trump and her at the helm.

She has changed tack on Russia since the outbreak of war, condemning the invasion of Ukraine and saying she is independent of any foreign nation, and she has tried to shift attention on to the domestic price of sanctions, inflation, energy costs and the cost of living crisis.

At the press conference she said: “I only ever defended the interests of France.” She said her approach was very similar to Macron’s, since he had built up a personal relationship with Putin and pursued dialogue with him, inviting him to the Palace of Versailles and to his summer residence on the Mediterranean.

Le Pen said better ties with Russia would prevent Moscow from becoming too close to China, noting that she was echoing an argument made by Macron in the past.

On defence, Le Pen said: “I would place our troops neither under an integrated Nato command nor under a future European command,” adding that she would refuse any “subjection to an American protectorate”.

In the final weeks before what is expected to be a close vote, the pro-Europe Macron has savaged Le Pen on foreign policy grounds, attacking her for nationalism and friendships with rightwing leaders. He told a rally in Strasbourg this week that “nationalism is war”.

Le Pen has changed her policy on Europe from five years ago when she pushed for France to leave the EU and the euro. But Macron has said her proposed changes to treaties, dismantling of rules and cuts to budget contributions would mean France was pushed out of the EU.

“She wants to leave but she doesn’t dare say it,” Macron said, accusing his opponent of wanting to strike a special alliance with the right in Hungary and Poland. Le Pen took a loan from a Hungarian bank for the campaign, and told the press conference that French banks had refused to lend to her.

Le Pen said she did not want “Frexit” but a looser version of the EU. “Nobody is against Europe,” she said. “I would not stop paying France’s contribution to the EU, I want to diminish it.”

But she said the UK’s Brexit had been a big success. She said the French “ruling political class” had been proved wrong after it predicted a “cataclysm for the English”.

She said: “The British got rid of the Brussels bureaucracy, which they could never bear, to move to an ambitious project of global Britain.” But she added: “This is not our project. We want to reform the EU from the inside.”

Le Pen insisted she wanted to keep a close relationship with Germany, but then launched a stinging attack on their strategic differences, which she said would mean putting an end to a series of Franco-German joint military programmes.

She said she would continue “reconciliation” with Germany, “without following the Macron-Merkel model of French blindness towards Berlin”.
#Donald Trump
Add Comment