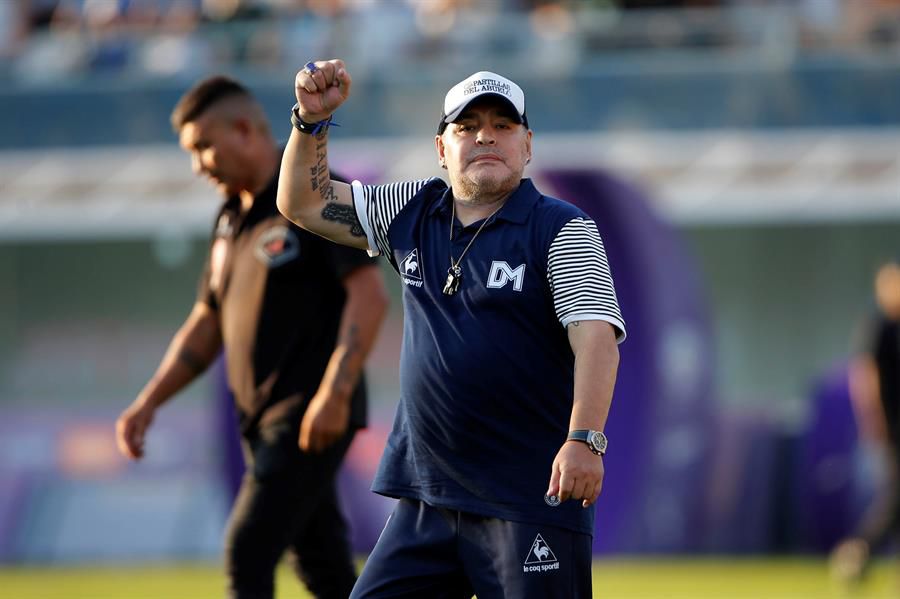 Maradona will be operated on for a hematoma on his head

Argentine soccer legend Diego Maradona was on Tuesday night about to enter the operating room to have a bruise removed on his head, although he is lucid and calm, five days after his 60th birthday.
I am going to operate on a subdural hematoma. It is a routine operation. He is lucid. He understands. He totally agrees. He is very calm, said his doctor, Leopoldo Luque, at a press conference.

Maradona was transferred in an ambulance from his admission to a sanatorium in La Plata, 60 km south of the capital, to the Olivos Clinic, north of Buenos Aires. They immediately began to perform pre-surgical examinations, reported medical sources cited by the local press.

Gianinna, one of his daughters, accompanied him in the vehicle. Dozens of fans were outside shouting "Maradó, Maradó ...".

Most of the patients who have these bruises are usually elderly and at risk. The panorama does not change us at all. Diego continues the same with the same clinical condition he had, but the cause was not yet there, which is now concrete, said Luque.

Asked if it was a blow, the doctor said that "patients often do not remember" what happened. "The bruises are imperceptible," he continued.

The emblematic former captain of the Albiceleste had been admitted on Monday for a series of medical check-ups as a result of discomfort, but a hematoma was found in a tomography.

“The operation consists of a small incision to drain the blood. In 24 or 48 hours the patient can leave the hospital, "said the neurosurgeon Raúl Matera to the channel TyC Sports.

The doctor from the Argentine Football Association (AFA) Donato Villani was with Maradona at the time Luque arrived with the result of the scan. "I saw Diego better than other days," he revealed.

Earlier the news was different. Luque had reported that Maradona was "much better than yesterday."

“I would like you to stay one more day. He is anemic, a little dehydrated, we have to correct this and see that he continues to improve ”, the doctor had declared.

Confined since March by the coronavirus pandemic, for being a risk patient, the coach of Gimnasia La Plata appeared on Friday in public very deteriorated and with difficulties walking and speaking on his 60th birthday when first division football resumed.

The 1986 world champion in Mexico went to the stadium where he was honored for his anniversary, but had to retire before half an hour of play, unable to enjoy his team's 3-0 win over Patronato.

Gimnasia fans concentrated in the sanatorium to leave messages of encouragement and wishes for improvement, along with flags of the 'Lobo' of La Plata and with the face of their idol.

“What he needs most is the support of the people. He spent the night well, he is in good spirits. We were joking, walking, ”Luque said. The hashtag Fuerza Diego multiplied on the networks.

Recovered years ago from his addiction to hard drugs, Maradona is medicated with tranquilizers and anxiolytics and consumes alcohol.

Luque explained that due to the gastric bypass that Maradona underwent in 2005 to lose 50 kilos, he has difficulty retaining iron, which makes him more prone to anemia.

One of his ex-partners, Rocío Oliva, said that she contacted Claudia Villafañe on Monday, with whom Maradona was married for 24 years before divorcing in 2000, saying that she can help him."

"You cannot imagine the things that I write and erase because now the only important thing is that he is well ... For the good of all bloodsuckers, let nothing happen to him," said Dalma, Maradona's first daughter and Villafañe. "It breaks my soul to see him like this," his sister Gianinna had written on social networks.

Dalma and Giannina were for many years his ground wire and they allow themselves to get angry, distance themselves and befriend their father, as well as criticize their "environment".

In addition to Dalma and Gianinna, Maradona is the father of Jana, 24, Diego Junior, 34, and Diego Fernando (7). His lawyer, Matías Morla, said last year that he would have three other children in Cuba, without acknowledging them.

Maradona has suffered from numerous health problems. Among the most serious are a cardiac crisis due to drug overdose in 2000 in the Uruguayan resort of Punta del Este and four years later a double coronary and respiratory disease that brought him to the brink of death.
#Coronavirus
Add Comment