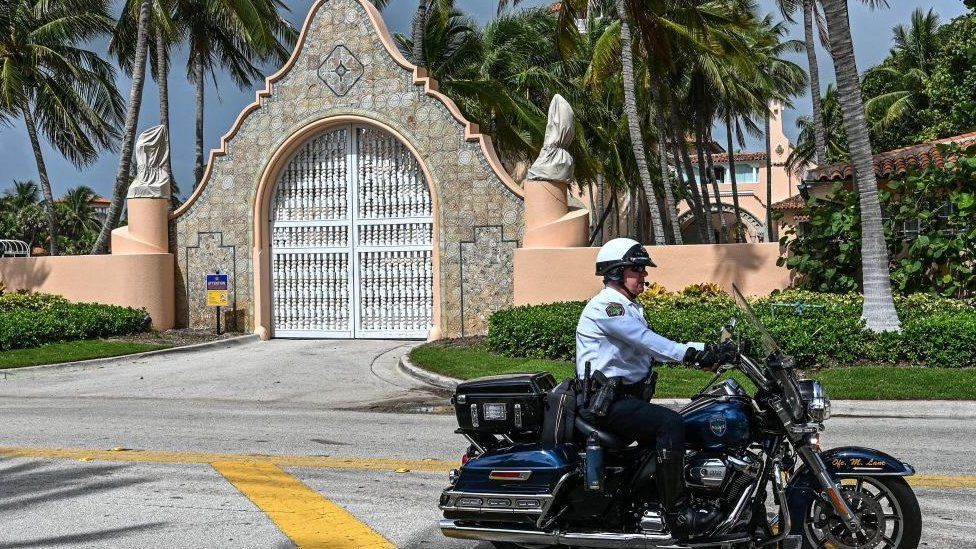 Furious allies of former President Donald Trump are demanding an explanation for the FBI's raid on his Florida home, Mar-a-Lago.

The FBI and Department of Justice have yet to comment on the search, which Mr Trump disclosed on Monday evening.

It is reportedly linked to an investigation into his handling of classified and sensitive material.

It was the first time a former US president's home has ever been searched by law enforcement.

Reports suggest the FBI activity is connected to an investigation into whether Mr Trump, a Republican, removed classified records from the White House and took them to Mar-a-Lago.

The search was approved at the highest levels of the Department of Justice (DoJ), an unnamed US official told CBS News, the BBC's US partner.

Republicans have depicted the investigation as politically motivated, with leading figures demanding a briefing from Attorney General Merrick Garland, head of the DoJ.

Mr Trump's former Vice-President, Mike Pence, who has subtly distanced himself amid speculation they may both launch 2024 White House runs, called on the attorney general to give "a full accounting" of why the search warrant was carried out.

"No former President of the United States has ever been subject to a raid of their personal residence in American history," he wrote on Twitter.

Mr Trump's allies in Congress, meanwhile, vowed to launch an investigation if they win back control of the House of Representatives and Senate in November's mid-term elections, when the balance of power in Washington will be decided.

White House spokeswoman Karine Jean-Pierre told reporters on Tuesday that President Joe Biden was given no advance notice by the FBI of the raid, and that he "learned about this from public reports".

"The president was not briefed and was not aware of it. No-one at the White House was given a heads-up," she said.

She told reporters that Mr Biden had gone to great lengths to preserve the independence of the justice department, adding: "President Biden believes in the rule of law." 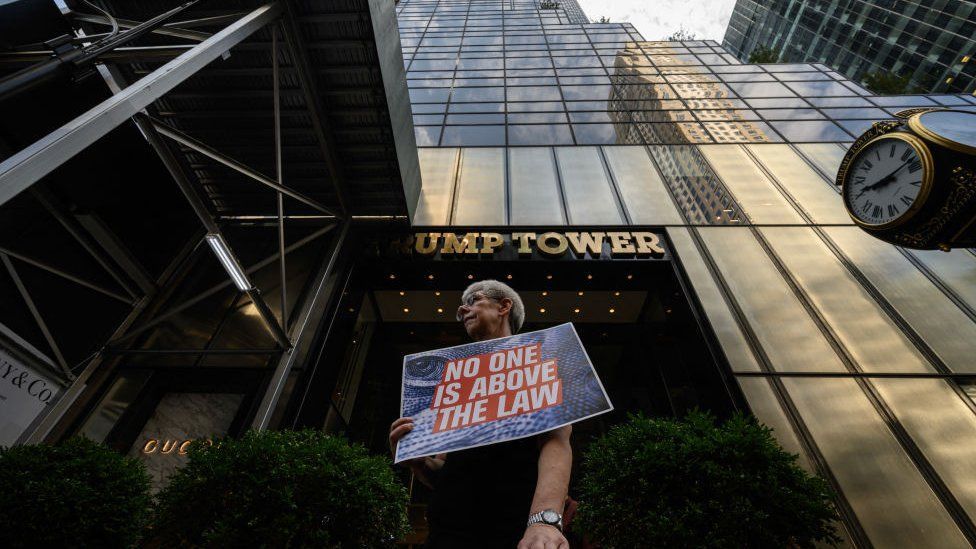 An anti-Trump protester outside Trump Tower in Manhattan on Tuesday

The raid was first announced on Monday evening in a statement by the former president, who was at Trump Tower in New York City.

Lindsey Halligan, a lawyer for Mr Trump, said she had received a call around 10:00 local time (14:00 GMT) that the FBI had a search warrant for Mar-a-Lago and that she should come to the property.

She said she saw 30 to 40 gloved FBI agents, some in suits and others dressed casually, and around 10 to 15 FBI vehicles, including a rental truck.

Ms Halligan told CBS she and another lawyer for Mr Trump were barred from entering the complex, and that the search was divided into three sections: a bedroom, office and storage area.

"Complete overkill," she said. "If they needed documents, they could have asked."

In a fundraising email to supporters on Tuesday, Mr Trump - who is currently at his Bedminster, New Jersey, golf club - said he and other Republicans were being targeted because of his political influence and "my dominance in all polls".

"They are trying to stop the Republican Party and me once more," he said, adding: "The lawlessness, political persecution, and Witch Hunt, must be exposed and stopped."

Republican Senate leader Mitch McConnell released a statement on Tuesday saying the justice department "should already have provided answers to the American people and must do so immediately".

While many Democrats welcomed the raid, several urged the DoJ to provide more information. Some aired concerns that it could boost support for the former president.

"This could be very useful to him as many people rally around him during this time," Dave Aronberg, the state attorney for Palm Beach, where Mar-a-Lago is based, told the BBC. "Trump will use this to regain his martyr status."

Democratic Speaker of the House Nancy Pelosi said she first learned of the "visit" by FBI agents through public reports on her phone.

"To have a warrant, you need justification," she told NBC News. "And that says that no-one is above the law, not even a president or former president of the United States."

*  A prosecutor in Fulton County, Georgia, is investigating whether Mr Trump and his associates tried to interfere in that state's results from the election

*  A federal appeals court ruled on Tuesday that lawmakers can US gain access to Mr Trump's long-hidden tax records, affirming the decision of a lower court

*  This week, he will be forced to face questioning from the New York state attorney general, who is investigating whether he fraudulently inflated the value of his assets