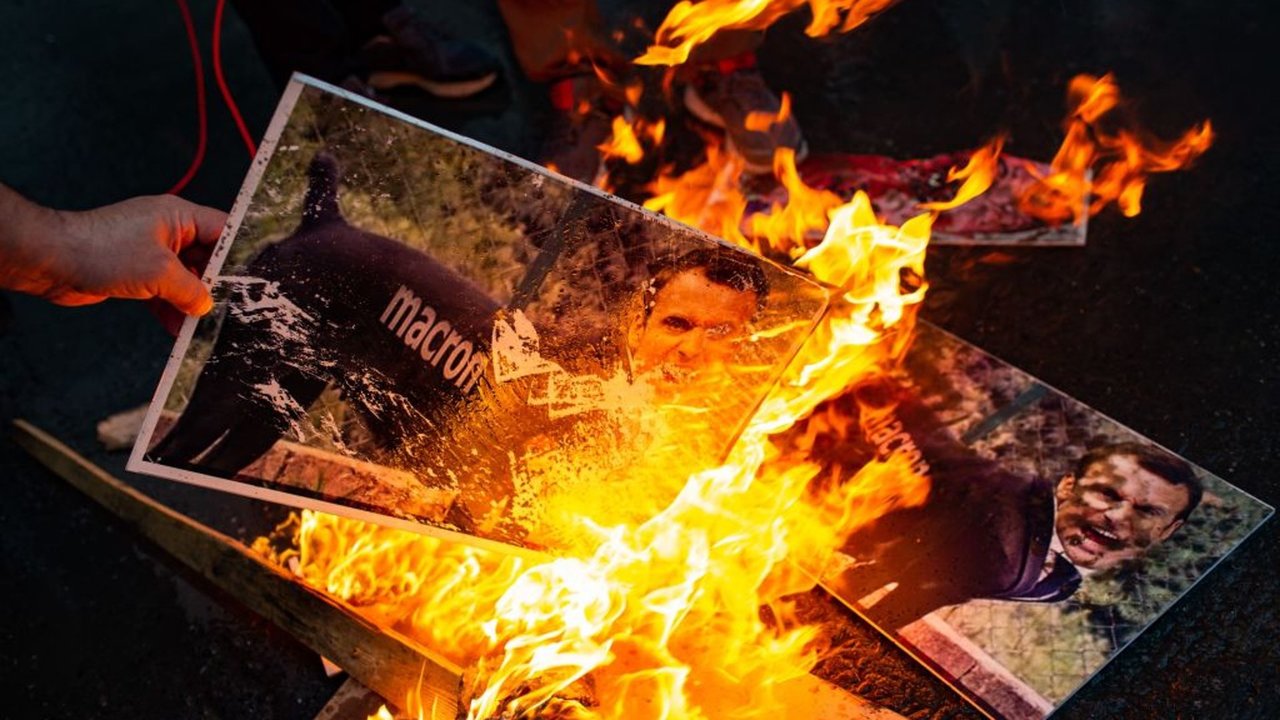 Macron’s France is fearful and angry

On Thursday morning, I visited the cathedral at Reims. The central door on the north side is dedicated to Saint Nicasius, who founded the first cathedral on the site and who, in 407 AD, was decapitated by the Vandals.
It struck me as odd that a burly security guard was checking visitors' bags, but shortly after leaving the cathedral I learned of what had unfolded at the Notre Dame Basilica in Nice.

Barbarity is nothing new to France but what is so troubling about the wave of bloody violence that has swept the country in the last decade is the impotence of the rulers. Emmanuel Macron flew to Nice and made an all-too familiar presidential declaration about France 'not giving in to terror'.

He offered the same passive platitudes a fortnight ago, hours after a schoolteacher had been beheaded in a quiet suburban street for showing a cartoon of the prophet Mohammed in the classroom.

As if to underline the emptiness of the president's words, scores of demonstrators took to the streets of Dijon on Thursday night to make known their anger. They ignored the government's coronavirus curfew, as they did the rules on social distancing and mask wearing.

Such was their fury. But these were not Frenchmen and women sickened at the slaying of three Christians by an Islamic extremist; these were young, pro-Turkish demonstrators – supporters of president Erdogan, who days earlier had accused Macron of Islamophobia and mocked his mental state.

There was a similar protest in Lyon on Wednesday evening, when an estimated 200 pro-Turkish protesters paraded through the streets. There were cries of 'Allahu Akbar', as the mob sought to settle scores with Armenians.

Thursday's barbarity was the work of a 21-year-old Tunisian, an illegal immigrant who arrived in France just weeks earlier. Whether he launched his attack of his own accord, or whether he was despatched across the Mediterranean by the Islamic State has yet to be determined.

The man who murdered Samuel Paty, the schoolteacher, was a Chechen. And a young man of Pakistani origin was arrested after two journalists were attacked with meat cleavers in Paris last month. Other Islamist atrocities in France in recent years have been attributed to Algerians and French-Moroccans.

Once the French celebrated diversity – what is known in France as 'Vivre-Ensemble' – but now many fear it. This is the strategy of the Islamists: to sow fear and distrust among the French, so that they turn on each other and the country slides into the civil war so chillingly depicted by Michel Houellebecq in his 2015 novel, Submission. The climax of that novel comes in the lead up to the 2022 presidential election, now just 18 months away.

I've never known France so fearful, and so angry. It was palpable yesterday afternoon in Reims, and I could feel it this morning when I returned to Paris. There is a sullen resentment at the government's mismanagement of coronavirus, which has culminated in a second lockdown that begun today. And there is a raw desperation at their leader's inability to protect them.

Furthermore, they ask, why is it that terrorists appear to move around with impunity but the movements of the rest of the country are strictly controlled? Small wonder that a poll on Friday revealed that only one in four of those canvassed have confidence in the present government to defeat the Islamists.

If Macron has – as some in France claim – 'lost control' of coronavirus, he is also losing control of his other 'war' against Islamic extremism. Macron's problem is that he is an intellectual, reared from an early age in the smug surety of Western liberalism. Like other western European leaders, he cannot fathom an ideology that brooks no compromise, that has only one objective: conquest by any means.

To combat such extremism will require him to be ruthless. 'Should we toughen our laws?' asked today's editorial in Le Figaro. 'Without hesitation, if we want to win and retake our destiny in our hands.'

That will mean tightening the country's borders, shutting down the extremists' mosques and doing something about the 8,132 people on the radar of the intelligence services. Many of France's intelligentsia will be outraged at such policies; so be it. Let them wring their hands it if means no more throats are cut.
#Coronavirus
Add Comment