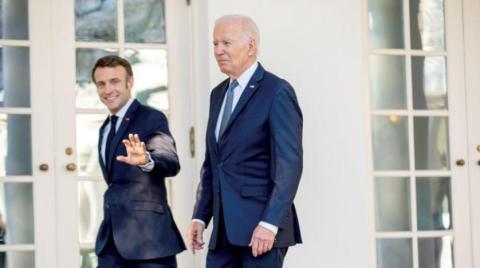 US President Joe Biden announced his readiness to meet with Russian President Vladimir Putin on the condition that Putin is ready to end the aggression on Ukraine.
The President stressed that the only way to end the war was Russia's withdrawal from Ukraine, ruling out that Russia would be able to achieve victory in the war.

Biden was speaking during the first state visit of his presidency in the presence of French President Emmanuel Macron.

Macron focused on showing the massive infrastructure damage in Ukrainian and the impact of the war on European countries.

Both leaders reiterated their continued support for the Ukrainian people, ensured their steadfastness in the face of Russia, and asserted the need to equip the Ukrainian forces with the necessary financial and military aid.

They also agreed to support the defenses of NATO and its members, but there appeared to be a big gap between Macron's desire to end the Russian-Ukrainian war through negotiations and Biden's desire to support Kyiv until the restoration of all lands from the control of the Russian forces.

Macron confirmed in an interview with ABC channel that he would hold talks with Putin in the coming days, noting that he wanted to visit Washington and have in-depth discussions with Biden.

Macron believes negotiation is still "possible" with Putin to end Russia's invasion of Ukraine, which he described as a "huge mistake."

"[Putin] is in charge, and he's been in charge for quite a long time … He knows his people. I think he made a mistake," Macron said.

"Is it impossible to come back [to] the table and negotiate something? I think it's still possible."

The last official talks between Macron and Putin dated back to Sept. 11, and the French President announced that he intends to have "direct contact" with the Russian President on several issues.

The Elysee Palace stated that Macron would remind Putin of France's demands, which are the exit of Russian forces from Ukraine, and restoring Kyiv's sovereignty and territorial integrity.

Meanwhile, Biden and Macron disagreed on several issues, including China and stability in the Indian and Pacific oceans.

Macron favored a pragmatic rapprochement with China to achieve a breakthrough, while Biden adhered to the policy of competition with Beijing on some issues and cooperating on others.

The disparity between the two leaders was apparent regarding the most pressing issues, as Biden refused to apologize for enacting the Inflation Reduction Law, despite Macron's attempts to convince him of its negative impact on French and European companies.

The French and US Presidents agreed on the Iranian nuclear program, as Biden stressed that both countries are determined to ensure that Iran can never develop or acquire a nuclear weapon.

They also expressed their respect for the Iranian people who are "bravely protesting" to gain the freedom to exercise their human rights and fundamental freedoms, which Iran itself has subscribed to and is violating.

Paris and Washington continue to work with other international partners to address Iran's nuclear escalation, its insufficient cooperation with the IAEA, including on severe and outstanding issues relating to Iran's legal obligations under its Non-Proliferation Treaty Safeguards Agreement, and its destabilizing activities in the Middle East.

In a joint statement issued before the press conference, the Presidents recognized the importance of a stronger and more capable European defense that contributes positively to transatlantic and global security and is complementary to and interoperable with NATO.

The statement stressed the speedy provision of significant resources to support Ukrainian civilian resilience through the winter, including stepping up the delivery of air defense systems and equipment needed to repair Ukraine's energy grid.

The United States and France plan to continue working with partners and allies to coordinate assistance efforts, including at the international conference in Paris on Dec. 13, 2022.

They also intended to continue providing robust direct budget support for Ukraine and to urge international financial institutions to scale up their financial support.

The US and France are strengthening their partnership in the Indo-Pacific region to advance prosperity, security, and shared values based on a rules-based international order, transparent governance, fair economic practices, and respect for international law, including freedom of navigation.

They would continue to coordinate on concerns regarding China's challenge to the rules-based international order, including respect for human rights, and work with China on critical global issues like climate change.

Concerning Africa, the presidents renewed their resolve to work with African partners to pursue shared governance, security, and economic priorities on the continent.

Paris and Washington are determined to work closely to support peace and prosperity in the Middle East. The Presidents welcomed the historic breakthrough of the October 2022 Israel-Lebanon maritime boundary agreement.

The Presidents welcomed the successful first year of the US-France Bilateral Clean Energy Partnership, which convened most recently in October 2022, as the high-level platform to advance energy and climate cooperation.
#Joe Biden
Add Comment