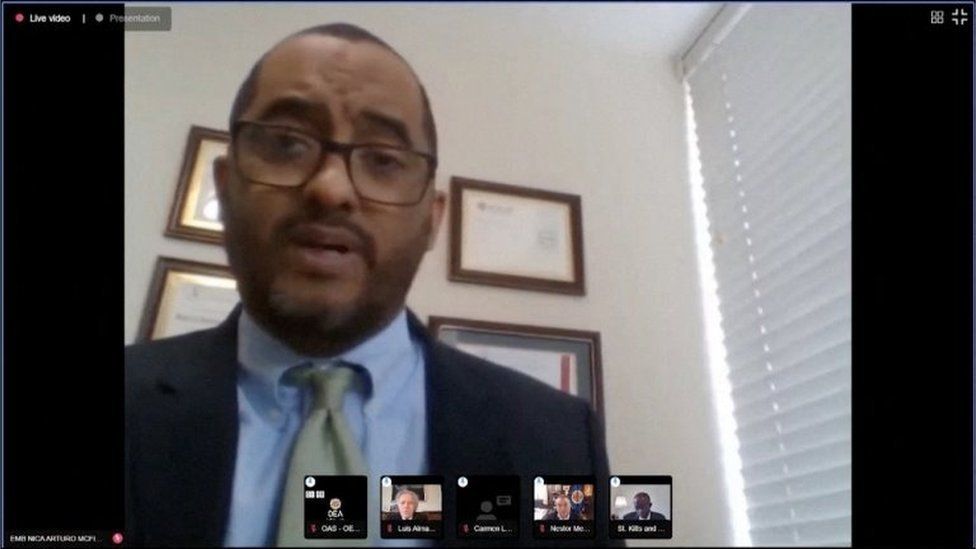 A Nicaraguan ambassador has urged his fellow citizens to "lose fear, not hope", following an explosive video address in which he described his own government as a dictatorship.

He made the surprise attack in a speech to the council of the regional body, the Organization of American States.

The Nicaraguan government said Mr McFields did not represent it.

Ambassador McFields addressed the permanent council of the regional body Organization of American States (OAS) via video on Wednesday.

In an unexpected turn of events, the diplomat, who has held the post since November 2021, condemned his own government's human rights abuses.

Mr McFields said he was speaking up on behalf of Nicaragua's political prisoners and those killed since anti-government protests broke out in the Central American nation in 2018.

His speech in Spanish was posted on Twitter by the OAS.

In it, he says that "denouncing the dictatorship in my country is not easy, but to continue remaining silent and defending the indefensible, is impossible".

He also denounces the lack of a freedom of speech in Nicaragua and says that the elections which returned President Ortega to a fourth consecutive term in office were "not credible".

He ends by assuring the OAS that people inside and outside of the government are "tired of the dictatorship and its actions".

Shortly after Mr McField's speech, the Nicaraguan foreign ministry issued a curt statement simply saying that "Mr Arturo McFields does not represent us and therefore none of his remarks are valid".

In an interview with exiled opposition journalist Carlos Chamorro, Mr McFields said he had felt "liberated" after breaking with the government.

He said he had been moved to speak out after hearing the testimony of political prisoner Tamara Davila who had not been allowed to see her five-year-old daughter since her arrest nine months ago.

"I have a five-year-old daughter and I cried. I cried because I live a comfortable life here in the US [where the OAS is based]. I can kiss my girl goodnight and pray with her, but this woman is rotting in jail."

Mr McFields also listed the sentencing of presidential hopeful Cristiana Chamorro this week as one of the things that drove him to speak out now.

Asked in the interview why he endorsed November's presidential election as free and fair at the time, Mr McField's said that "I had to do it, or I would have been sacked and my passport would have been taken from me upon my return to Nicaragua".

He says that being named ambassador gave him "the platform to speak truth to power".

While he acknowledged how difficult it had been for him to criticise the Ortega government publicly and how he feared for his family in Nicaragua, Mr McField urged his fellow citizens "not to lose hope, but to lose fear".