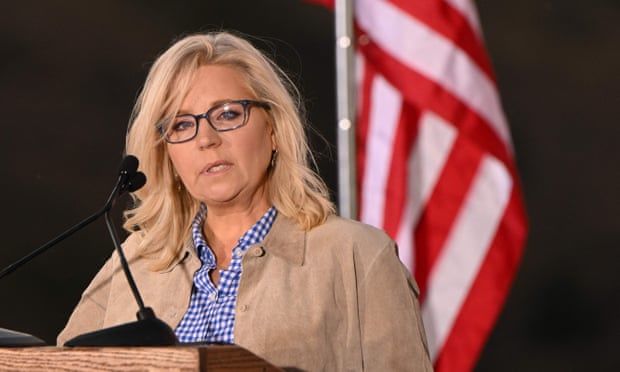 Republican congresswoman Liz Cheney has announced she is considering her own run for the White House in an all-out effort to prevent Donald Trump from winning another term as US president.

Cheney decisively lost her Republican primary race on Tuesday night and will lose her seat in the US Congress.

The Trump-backed challenger Harriet Hageman beat Cheney by almost 40 points as Wyoming voters took revenge for her voting to impeach Trump and for focusing on her role on the January 6 House select committee.

The panel, of which Cheney is vice-chair and one of only two Republicans, is investigating Trump’s role in fomenting the insurrection at the US Capitol by his supporters on 6 January 2021, in a vain attempt to stay in office following his defeat by Joe Biden.

Cheney was asked on NBC’s Today show on Wednesday morning whether she was thinking of running for president. She did not respond to the question directly but, when pressed a second time, admitted she was.

“It’s something I’m thinking about, and I’ll make a decision in the coming months,” she said.

On Tuesday night she said she would “do whatever it takes to keep Donald Trump out of the Oval Office”. After her loss to Hageman by almost 60,000 votes was confirmed, aides revealed the former House number three planned to set up her own political action committee.

“In coming weeks, Liz will be launching an organization to educate the American people about the ongoing threat to our republic, and to mobilize a unified effort to oppose any Donald Trump campaign for president,” Cheney spokesperson Jeremy Adler told Politico Playbook.

NBC confirmed on Wednesday that it will be named The Great Task, which was the title of Cheney’s final pitch to Wyoming voters, and features in the closing sentence of Abraham Lincoln’s Gettysburg Address.

On Wednesday, Cheney laid out her priorities for the next few months before leaving the House in January.

Beyond “representing the people of Wyoming”, she said: “We have a tremendous amount of work left to do on the January 6 committee. And also, though, I’m going to be making sure that people all around this country understand the stakes of what we’re facing, understand the extent to which we’ve now got one major political party, my party, which has really become a cult of personality.

Cheney, daughter of former Republican vice-president Dick Cheney, attacked both Trump and the House Republican leader, Kevin McCarthy, the architect of her ousting from the party’s House leadership in May 2021 after she denounced the former president’s false claims of a stolen election. She expressed her belief that “the Republican party today is in very bad shape”.

“Donald Trump has betrayed Republican voters. He’s lied to them. Those who support him have lied to them and and they’re using people’s patriotism against them,” she said.

“They’re preying on people’s patriotism. Kevin McCarthy made his decision a few weeks after January 6, knowing what he knew about Donald Trump’s role in the assault on the Capitol, when he went to Mar-a-Lago and said we’re going to welcome him back into the party. To me, that’s indefensible.

“I believe that Donald Trump continues to pose a very grave threat, a risk to our republic, and I think defeating him is going to require a broad and united front of Republicans, Democrats and independents. That’s what I intend to be a part of.”

To some in the crowd of supporters on Tuesday night – gathered in an open field beside a red vintage Chevrolet truck, four US national flags, a dozen hay bales and a hospitality tent – it already sounded like the launch of a presidential campaign.

They welcomed the prospect out of both principle and pragmatism: Cheney would have little chance of winning but could peel crucial votes away from Trump.

Heath Mayo, 32, a lawyer, said: “There are few people making an argument counter to the prevailing Trumpism argument. She’s the only one that can make it. I certainly hope she’s not done. I hope she runs for president in 2024.”

Carol Adelman, who hired a 22-year-old Cheney for the US Agency for International Development, noted that the congresswoman received a John F Kennedy Profile in Courage Award from the JFK Library earlier this year. “We need that, not the profiles in cowardice that the Republican party has today. Ultimately, they will go.”

Alan Reid, 60, who works in finance, said of a possible presidential run: “Who else? Who’s better? I don’t see anybody from any party that shows the leadership that Liz shows.”

But a Cheney candidacy could pose a dilemma for Democrats who recall that she voted in line with Trump’s position 93% of the time during his presidency, according to the FiveThirtyEight website.

She explained: “I was so impressed with her integrity on the committee and the way she has stood firm, knowing damn well she was going to lose this election. I was born and raised here and this is the kind of integrity that Wyomingites, when I was growing, totally respected. For them to dismiss that in this election just breaks my heart.”

Bill Sniffin, publisher emeritus of the Cowboy State Daily news site in Wyoming, wrote in a blogpost: “Liz Cheney’s concession speech sounds a lot more like the announcement of someone planning to run for president in 2024 than an admission of defeat back here in 2022.”

He added: “This is not the end of Liz Cheney. This is the beginning. Stay tuned.”

Trump remains the favorite among Republicans for the party’s 2024 presidential nomination.

Oh ya 169 days ago
Is this todays joke of the day?
View all comments (1)Add comment