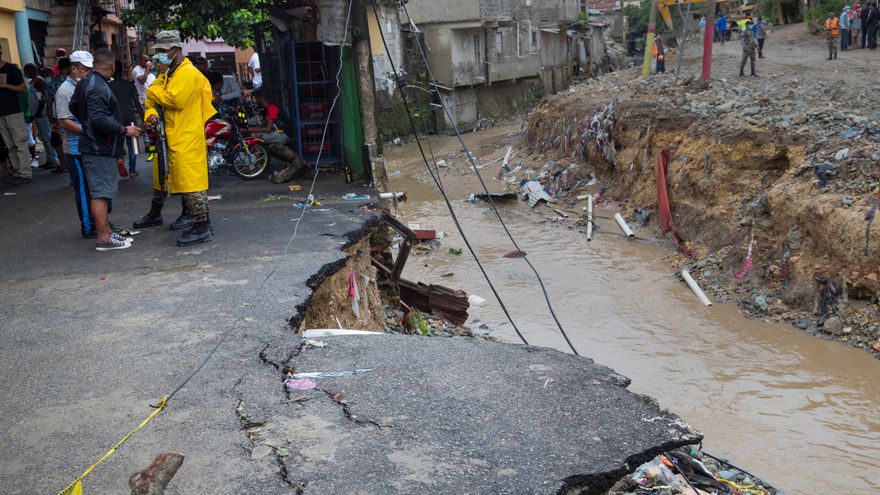 Tropical storm Laura, which could become a hurricane on Tuesday, was transiting through central Cuba on Monday after causing at least 13 deaths in Haiti and the Dominican Republic, while heading towards the United States, which is already under threat from the weakened hurricane Marco.
Laura causes rains and flooding in Cuban territory, without major damage being reported, although she still threatens to anticipate forecasts and rise to the category of hurricane before leaving the island.

It has changed very little in its intensity; remaining at 100 km per hour of sustained winds. It is a tropical storm, and its course and ability to travel have changed little, meteorologist Elier Pila told state TV.

It travels at a speed of 33 km per hour, which gives it little time to feed on the high temperatures of the sea – an unfavorable factor for its development and, in terms of impacts, favorable for us, Pila added.

Earlier, his colleague José Rubiera valued the possibility that Laura could become a hurricane earlier than expected: It is now 100 km per hour and a category 1 hurricane would be 119 km per hour. It cannot be ruled out, he added.

In Haiti, Laura left nine dead and two missing on Sunday, according to official reports.

In the Dominican Republic, which Haiti shares with the island of Hispaniola, Laura has already left four dead.

That forecast coincides with that of the National Hurricane Center of the United States (NHC), which foresees that Laura will become a hurricane between Tuesday and Wednesday, and reach the US coastal area.

Meanwhile, Hurricane Marco weakened and was degraded as a storm Sunday night, producing heavy rain and gusty winds along parts of the northern Gulf Coast of Mexico, according to the NHC.

It is expected off the southeastern coast of Louisiana late Monday, where it should lose even more intensity, turning into a tropical storm.

The center of the storm passed through Santiago de Cuba, crossed Granma to go out to the Guacanayabo Gulf, and is now moving by sea, south of Sancti Spiritus, parallel to the southern coast of the center of the country.

There is enough heat there during contact with the sea that it can intensify a bit more, but it is gradual, Rubiera explained.

In its wake it leaves rain, storm surge and coastal flooding, although no personal injury has been officially reported.

The winds caused damage to some roofs and buildings and the fall of trees and poles, according to reports from the provincial authorities and press.

The center of the storm should approach the west of Cuba on Monday afternoon-night, to briefly cross the island from south to north and go out to sea again early Tuesday, possibly through Pinar del Rio (extreme west), heading northwest , according to the forecast.

The winds and rains associated with the cyclone would also affect the capital, Havana in the last stretch, before moving away from Cuba.

Laura's rains have already hit the regions of Guantánamo and Santiago de Cuba, in the east of the country. The cyclone caused gusts of up to 146 km per hour and waves of more than 3 meters in the town of Maisí, the most eastern end of the island.

Between Guantánamo, Santiago de Cuba, Granma and Camagüey, some 160,000 people had been evacuated preventively, according to reports from the provincial authorities. There were also minor evacuations in the province of Las Tunas (center-east) and Ciego de Ávila.

As Laura approaches western Cuba, the work to protect the population is complicated because this is the area most affected by the outbreak of the covid-19 pandemic, especially in Havana, its current epicenter.

Cuba still keeps the pandemic at bay, with 3,717 cases reported at the end of Sunday, and 91 deaths.

Due to Laura and Marco's trajectories, 114 oil rigs in the Gulf of Mexico were evacuated.

The Atlantic hurricane season, which runs from June 1 to November 30, could be especially severe this year. The US National Hurricane Center expects 25 depressions and Laura is the twelfth so far.
#COVID-19  #Covid
Add Comment