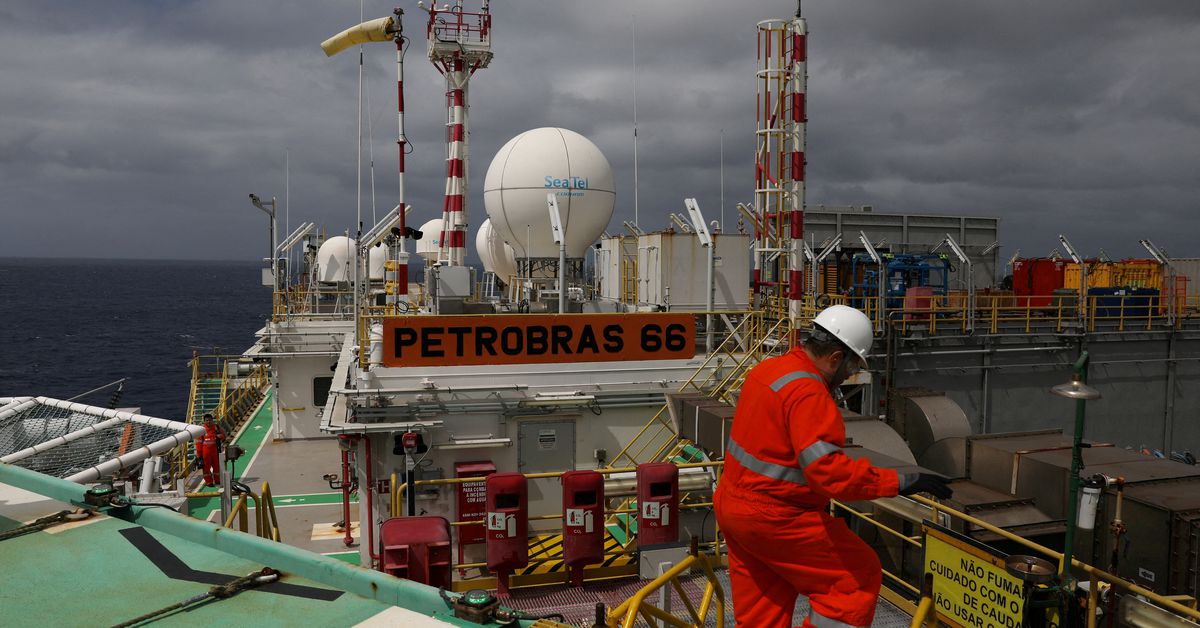 Latin America's oil frontiers are back in the spotlight with auctions coming up in Brazil, Guyana and the Andean region that are expected to attract bids from major oil firms despite a global call to end fossil fuel development.

Brazil is set to receive bids on Friday for offshore oil reserves that analysts say are some of the most promising to ever come to market. In other countries in the region, more flexible bidding and fiscal terms have piqued the interest of oil companies after a two-year bidding lull.

Latin America has been the source of some of the largest oil and gas finds this century, but several governments postponed or canceled auctions in 2019 and 2020 because of weak oil prices and falling demand due to the coronavirus pandemic.

Now, the rebound in energy prices this year coupled with a sense of urgency about getting oil and gas reserves out of the ground before the world shifts to renewable energy mean development projects are back on the agenda.

"The last two years have been hard for the region," said Andres Armijos, the Latin America chief at energy consultancy Welligence. "There is now the message that time is running out."

The International Energy Agency, whose members are mostly rich oil-importing nations, said in May that investors should not fund any new oil and gas projects if they want to achieve net zero emissions by 2050.

"Companies are undoubtedly being more selective," Rodolfo Saboia, the head of Brazil's oil regulator, told Reuters, saying many firms wanted to develop projects that could deliver returns fast, rather than the mega oil ventures of old.

Altogether, seven Latin American countries are looking to secure additional investment over the next two years by offering new blocks, and pushing legal and tax reforms that could give producers larger and faster returns. 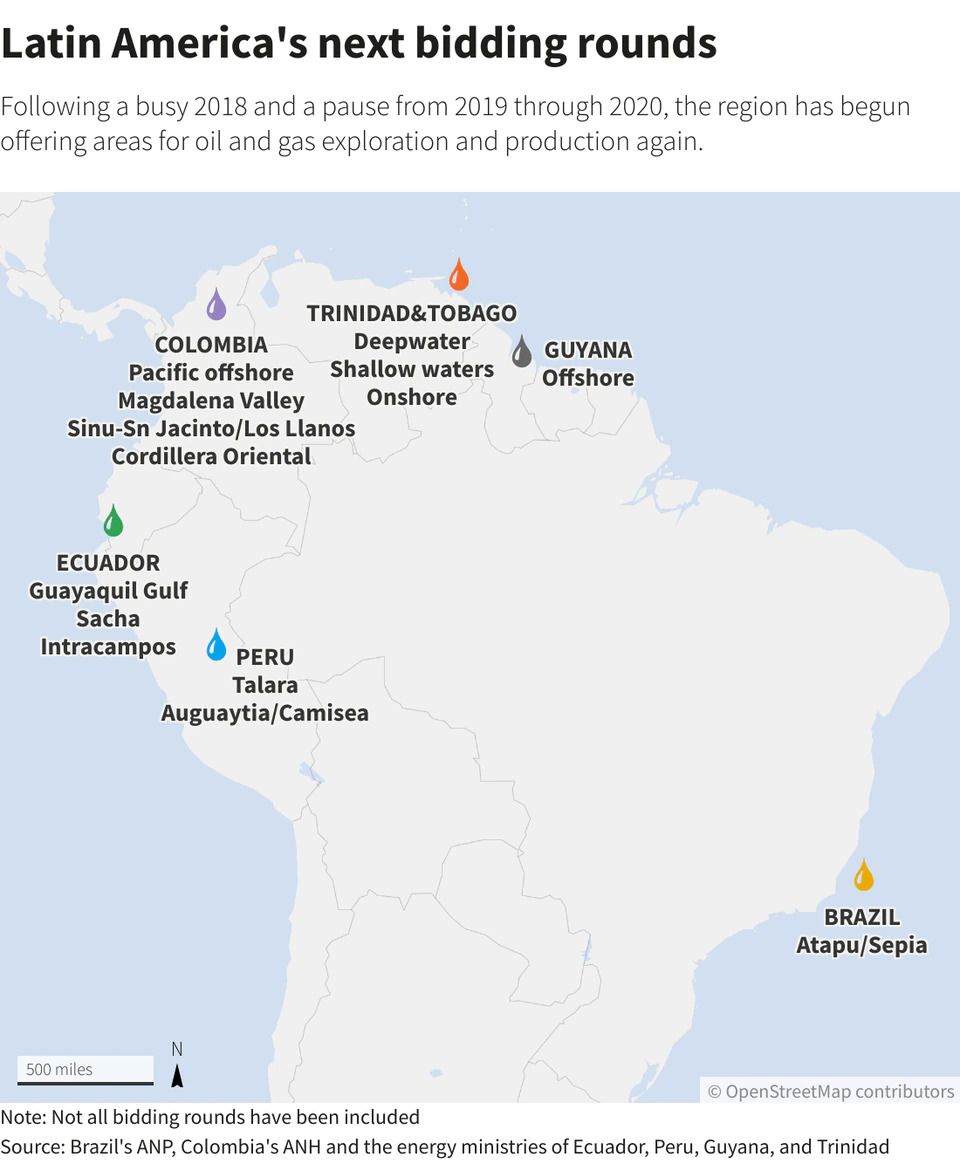 ONLY FOR BIG PLAYERS

The government expects to collect almost $2 billion in licensing fees and a portion of production.

In 2022, Brazil plans to strengthen its auctions by adding the coveted offshore pre-salt oil areas where most of its crude now comes from to an existing system that permanently offers numerous blocks.

Still, analysts said companies may have to pick and chose among Brazil, Suriname and Guyana for offshore oilfields - some of which are up for auction for the first time - due to the high levels of investment required.

An Exxon-led consortium has found 10 billion barrels of recoverable oil and gas off Guyana, and there could be double that in the basin that extends to Suriname, Exxon Senior Vice President of Exploration and New Ventures Mike Cousins said last week at a Houston energy conference.

"There will be competition among countries, but each one has its virtues," said Brazil's Saboia. "The energy transition will take time and companies want to secure supply in the meantime." 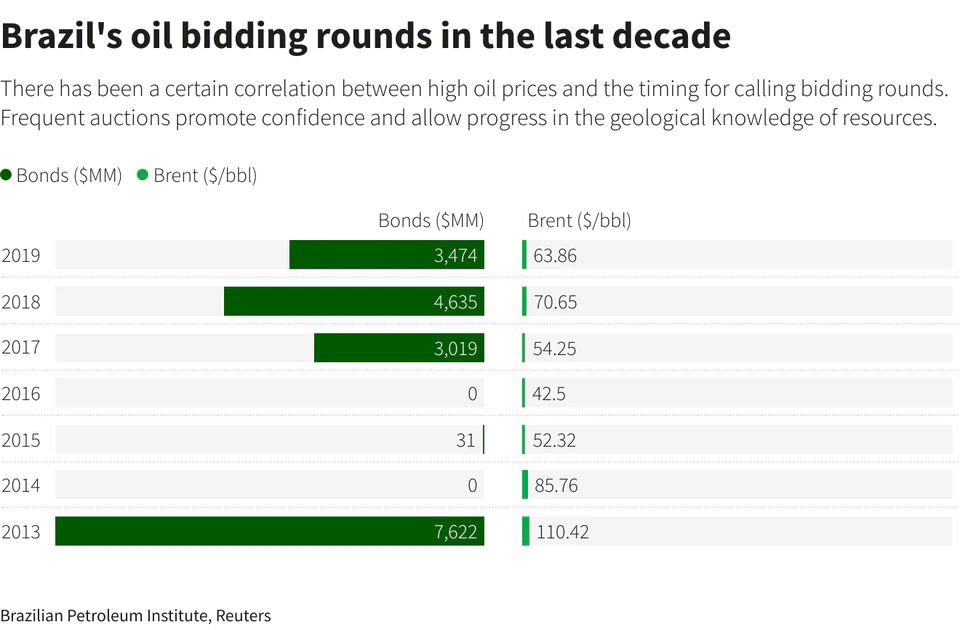 Colombia kicked off the new auction wave earlier this year with its 2021 Round, which was a surprise success. It received bids in December for 30 onshore and offshore blocks, which is expected to move it one step closer to energy self-sufficiency.

"Since the price crash of 2002-2003, Colombia has made regulatory reforms, created the ANH (National Hydrocarbons Agency) and introduced new contract models. 660 contracts have been signed since then," ANH President Armando Zamora said at the World Petroleum Congress (WPC) last week.

Days after Colombia accepted the bids, Trinidad and Tobago offered 17 deepwater blocks and announced two more oil auctions for exploration and production rights would be held next year in for onshore and shallow water areas.

Over the next two years, Ecuador will hold also a series of auctions to allocate oil blocks and look for a private operator for the nation's largest state-owned refinery, hoping to land $19 billion in investments and to boost oil output.

On the table in Ecuador will be three offshore blocks in the Gulf of Guayaquil including the vast Amistad gas field; the mature Sacha oilfield; and another five onshore areas - as well as the second phase of the Intracampos onshore oil round.

Peru, meanwhile, is drafting legislation to revamp its royalty model for the oil industry and regulate the influence of energy projects over communities, which have created obstacles for foreign investment and oil rounds.

"Peru is getting ready to offer a round of contracts in the north for oil and gas exploration and production," Energy Minister Eduardo Gonzalez said at the WPC.

The country also is planning to ramp up production in the prolific natural gas regions of Camisea in the Amazon Rainforest and Aguaytia, following projects for new distribution lines.