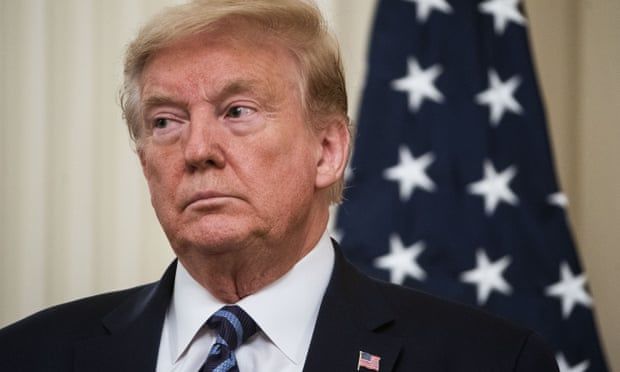 Carey Dunne and Mark Pomerantz quit amid signs that the move on Trump is stalling as it reaches make-or-break moment
One of the most aggressive criminal investigations against Donald Trump appears to be running into the sand after the two leading prosecutors in the Manhattan district attorney’s office investigating the former president’s finances resigned.

The inquiry by Manhattan prosecutors into the operations of Trump and the Trump Organization has been among the most dangerous of the many legal perils facing him. The investigation, which began in August 2018 under the former district attorney Cyrus Vance and continued under incumbent Alvin Bragg, has dug ever deeper into alleged discrepancies in the value of the family’s assets in an effort to show a pattern of fraudulent behavior.

According to the New York Times, the two top prosecutors on the case, Carey Dunne and Mark Pomerantz, quit the proceedings amid signs that the move on Trump is stalling as it reaches a make-or-break moment.

The Manhattan district attorney’s office confirmed to the Guardian that Dunne and Pomerantz had resigned. They said in a statement that they were “grateful for their service”.

The statement also insisted that the investigation into Trump finances was “ongoing”.

The newspaper reports that a grand jury convened under the Manhattan investigation as the first step towards indicting the former president has gone silent for the past month, with no witnesses called before it.

Anonymous sources told the Times that Bragg, who took over the investigation when he began as DA in January, had indicated that he was uncertain about taking the case to the next level.

Whatever Bragg decides to do in the coming days and weeks, it is clear that his office has been under mounting pressure recently as the inquiry reached a critical stage. Prosecutors were aware that the clock is running down as the present grand jury’s term comes to an end in April.

It was always going to be a tough call whether or not to pursue Trump all the way to court. As a criminal proceeding, the standard of proof is high – not only would Trump have to be found guilty “beyond a reasonable doubt” but prosecutors would have to show that he willfully committed the crime – hard to do in cases of alleged financial fraud.

Should the criminal investigation of Trump and his family business collapse, that still leaves the civil investigation that is being conducted by the New York state attorney general, Letitia James. For several months the two cases have been run in tandem, with the prosecutorial teams working closely together.

In January James opened a window on what the two teams of prosecutors had come up with when she alleged that Trump and his family business had “falsely and fraudulently” valued multiple assets. They included golf clubs, hotels and real estate holdings which James alleged were either inflated in value to attract loans or undervalued to reduce the company’s tax burden.

Trump and his lawyers have consistently denied any wrongdoing, and decried the parallel probes against him as a politically motivated witch-hunt. Both Bragg and James are Democrats, while Trump arguably remains effective leader of the Republican party.

The news that the criminal investigation might be running into difficulties is the first piece of potentially good news for Trump in several weeks relating to the many legal threats he is facing. In recent days he has been battered by a succession of dire developments on multiple fronts.

Last week his longtime accounting firm broke off relations with the Trump Organization saying that a decade of financial statements it had approved were no longer reliable. Days later a New York judge ruled that Trump and two of his children – Donald Jr and Ivanka – had to testify under subpoena in the James investigation.

With regard to on-going investigations into his role in the insurrection at the US Capitol on January 6, which are also gathering pace, the US supreme court delivered Trump a blow last month. It allowed White House documents which Trump had been trying to block to be turned over to the House committee investigating the events of that day.

In addition to the James investigation, Trump faces several other potentially serious legal actions. He is being sued for defamation by the journalist E Jean Carroll who has alleged that he sexually attacked her in the 1990s; a federal judge this week sounded dismissive of attempts by Trump’s legal team to counter-sue Carroll.

The former president is also the subject of a grand jury in Georgia which is looking into whether he criminally violated election laws when he urged the state’s chief elections administrator to “find” him 11,780 – one more than would have secured him victory.
#Donald Trump
Add Comment