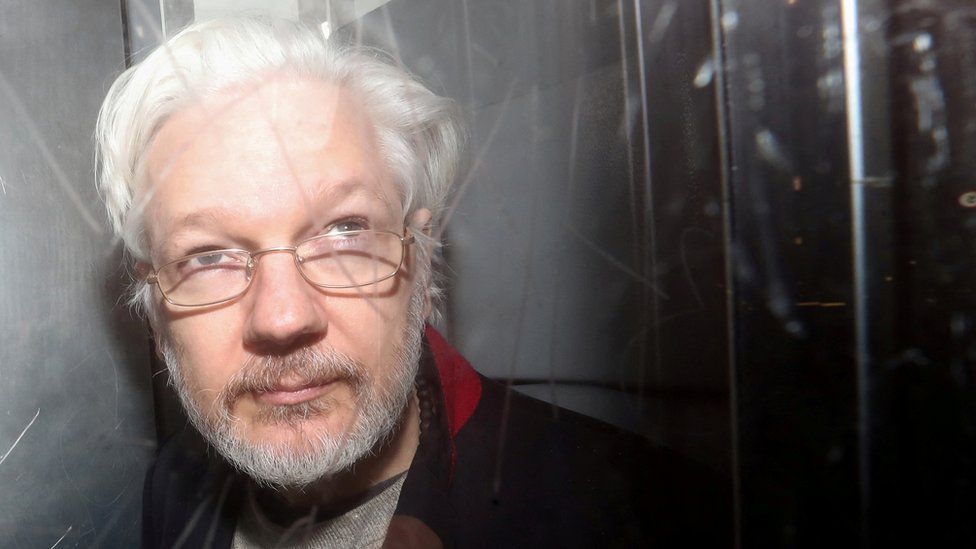 The Supreme Court has refused to allow Julian Assange his latest appeal against extradition to the US.

A court spokesman said Mr Assange's application did not raise "an arguable point of law". The decision is a major blow to his hopes to avoid extradition.

The Wikileaks founder, 50, is wanted in the US over the publication of thousands of classified documents in 2010 and 2011.

His lawyers said he had not ruled out launching a final appeal.

The case will now go back down to District Judge Vanessa Baraitser, the original judge who assessed the US's extradition request.

Home Secretary Priti Patel is then expected to make a final decision. If she approves the extradition, that is the stage when Mr Assange could make his fresh challenge, said his lawyers Birnberg Peirce.

Mr Assange faces an 18-count indictment from the US government, accusing him of conspiring to hack into US military databases to acquire sensitive secret information relating to the Afghanistan and Iraq wars, which was then published on the Wikileaks website.

The Wikileaks documents revealed how the US military had killed hundreds of civilians in unreported incidents during the war in Afghanistan, while leaked Iraq war files showed 66,000 civilians had been killed, and prisoners tortured, by Iraqi forces.

The US says the leaks broke the law and endangered lives, but Mr Assange says the case is politically motivated.

It's not over yet

Extradition law includes safeguards that Parliament hoped would provide a suspect with a full and fair opportunity to challenge their removal to another country, particularly where there are legitimate questions over how they will be treated.

This Supreme Court decision underlines that past controversies over conditions in the US's most secure jails - and the manner in which it provides assurances over humane treatment - are, in legal terms, a settled matter for our law.

Assuming the home secretary approves the extradition - which may not be before June - Mr Assange can still try to open up the parts of the US case he lost way back in January 2021.

They include potentially important questions about whether his actions as Wikileaks chief were protected by human rights safeguards concerning freedom of speech.

So while the Supreme Court's decision means he's closer than ever to extradition, this affair is not over yet.

In January 2021, a lower judge who deals with extradition requests ruled that while the US had a case to prosecute Mr Assange for alleged offences relating to the mass hacking of government systems, he could not be sent from the UK to stand trial - because there was no guarantee that American authorities could safely care for him.

At the time, lawyers for Mr Assange argued his fragile mental health meant the US would find it impossible to stop him taking his own life - amid fears he was likely to be subject to solitary confinement.

The High Court then reversed that decision last December, saying that the US had provided good enough assurances that proved Mr Assange could be safely cared for.

Senior judges found the lower judge had based her decision on the risk of Mr Assange being held in highly-restrictive prison conditions if extradited.

However, the US authorities later gave assurances that he would not face those strictest measures unless he committed an act in the future that merited them.

Then, last month, Lord Burnett, the Lord Chief Justice, said there was now a legal question over how those assurances had been provided - and gave Mr Assange's lawyers 14 days to make the application to the Supreme Court.

If convicted in the US, Mr Assange faces a possible penalty of up to 175 years in jail, his lawyers have said. However the US government told the High Court the sentence was more likely to be between four and six years - and it would even consider sending him to an Australian jail.

At present, the Australian-born editor and activist is jailed in London's Belmarsh Prison.

He was first detained in the UK in 2010 - and later bailed - after Sweden issued an international arrest warrant over allegations of sexual offences.

Swedish authorities wanted to question him over claims that he had raped one woman and sexually molested and coerced another in August 2010 - but he said both encounters were entirely consensual.

Amid a protracted legal battle, he sought asylum in the Ecuadorean embassy in London, where he spent almost seven years.

He argued that he could not leave the embassy because he feared being extradited from Sweden to the US and put on trial for releasing the secret US documents.

But in 2019, Ecuador withdrew his asylum status and he was arrested by British police.

In May 2019, while serving a jail sentence in the UK for breaching bail, the US justice department filed 17 new charges against the Wikileaks founder for violating the Espionage Act, related to the publication of classified documents in 2010.

The investigation into the 2010 rape allegation was dropped by Swedish prosecutors later that year, in November 2019.