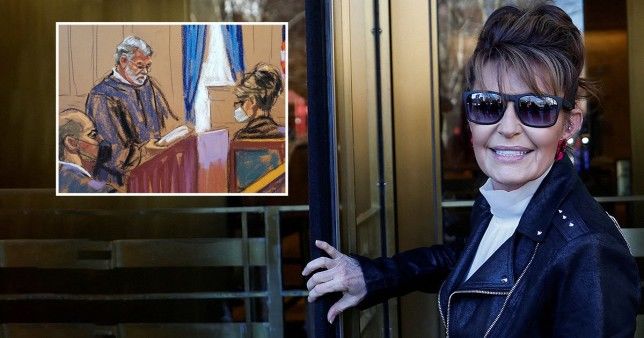 A judge in New York said he will dismiss Sarah Palin’s libel lawsuit against The New York Times because her lawyers failed to prove that the newspaper knew the 2017 editorial it wrote about her was false or acted recklessly toward indications it was false.
The former Alaska governor sued the newspaper, and its former editorial page editor, James Bennet, claiming the they defamed her by unfairly linking her to a 2011 shooting spree in Arizona that killed six people and gravely wounded then-Representative Gabby Giffords.

Palin, who grew to fame after Senator John McCain of Arizona picked her to be his running mate in 2008, has claimed the editorial damaged her reputation and hindered her political career.

US District Court Judge Jed Rakoff in Manhattan disagreed, and said he would order the dismissal of Palin’s lawsuit after the jury finishes deliberations. Allowing the jury to finish deliberations will allow Palin and her lawyers to use the verdict in an appeal to a higher court, which Rakoff said was ‘inevitable.’

Rakoff said the case would be dismissed because Palin had not met the high standard of ‘actual malice’ in the complaint, according to The New York Post.

The editorial, titled ‘America’s Lethal Politics,’ appeared to draw a connection between Palin and a 2011 shooting at a congressional baseball team practice that gravely wounded Giffords and killed six others.

Bennet had written that there was a ‘clear’ link between the deadly shooting and ‘political incitement,’ linking the incident to a map created by Palin’s political action committee.

‘Before the shooting, Sarah Palin’s political action committee circulated a map of targeted electoral districts that put Ms. Giffords and 19 other Democrats under stylized cross hairs,’ the editorial read. No link between politics and the gunman, Jared Lee Loughner, were ever established.

The Times issued a correction shortly afterward, saying ‘no such link was established’ between political rhetoric and the 2011 shooting.

To have won, Palin would not only need to prove that the newspaper’s claim was false, but that the outlet had operated with ‘actual malice’ and published the editorial knowing it was false.
Add Comment