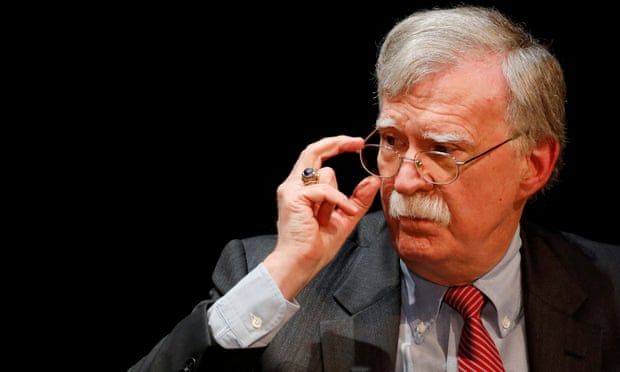 John Bolton, a former national security adviser to Donald Trump and before that ambassador to the United Nations under George W Bush, said on Tuesday he helped plan coup attempts in other countries.

Speaking to CNN after the day’s January 6 committee hearing, Bolton said it was wrong to describe Trump’s attempt to stay in power after the 2020 election as a coup.

He said: “While nothing Donald Trump did after the election, in connection with the lie about the election fraud, none of it is defensible, it’s also a mistake as some people have said including on the committee, the commentators that somehow this was a carefully planned coup d’etat to the constitution.

“That’s not the way Donald Trump does things. It’s rambling from one half-vast idea to another plan that falls through and another comes up.”

His host, Jake Tapper, said: “One doesn’t have to be brilliant to attempt a coup.”

Bolton said: “I disagree with that, as somebody who has helped plan coups d’etat, not here, but you know, other places. It takes a lot of work and that’s not what [Trump] did. It was just stumbling around from one idea to another.

“Ultimately, he did unleash the rioters at the Capitol, as to that there’s no doubt, but not to overthrow the constitution, to buy more time to throw the matter back to the states to try and redo the issue.

“And if you don’t believe that you’re going to overreact, and I think that’s a real risk for the committee, which has done a lot of good work.”

Tapper returned to Bolton’s remark about having helped plan coups.

Bolton said: “I’m not going to get into the specifics.”

Bolton said: “Well, I wrote about Venezuela in in the book and it turned out not to be successful.

“Not that we had all that much to do with it, but I saw what it took for an opposition to try and overturn an illegally elected president and they failed. The notion that Donald Trump was half as competent as the Venezuelan opposition is laughable.”

Bolton devotes considerable space to Venezuela policy in The Room Where It Happened, his 2020 memoir of his work for Trump.

In 2019, the US supported the Venezuelan opposition leader Juan Guaido’s call for the military to back his ultimately failed attempt to oust the socialist president, Nicolas Maduro, arguing Maduro’s re-election was illegitimate.

Before Bolton joined the Trump administration, it was widely reported that Trump wanted to use the US military to oust Maduro. In August 2017, Trump told reporters: “We have many options for Venezuela, this is our neighbour.”

Among other gambits, Bolton’s book describes work with the British government to freeze Venezuelan gold deposits in the Bank of England.

In his newsletter, The Racket, Jonathan M Katz, author of the book Gangsters of Capitalism, said: “The United States has indeed sponsored and participated in lots of coups and foreign government overthrows, dating back to the turn of the 20th century [and] Bolton was personally involved in many of the recent efforts – in Nicaragua, Iraq, Haiti and others”.

But, Katz added: “Generally, officials do not admit that sort of thing on camera.”

Katz wrote: “Keep in mind that throughout the 2019 crisis, Bolton insisted that the Trump administration’s support for … Guaidó … was anything but a coup. He literally stood in front of the White House at the height of the affair and told reporters: “This is clearly not a coup!”

In those remarks, in April 2019, Bolton said: “We recognize Juan Guaidó as the legitimate interim president of Venezuela.

“And just as it’s not a coup when the president of the United States gives an order to the Department of Defense, it’s not a coup for Juan Guaidó to try and take command of the Venezuelan military.

“We want as our principal objective the peaceful transfer of power but I will say again, as [Trump] has said from the outset, and Nicolas Maduro and those supporting him, particularly those who are not Venezuelan, should know, all options are on the table.”

Bolton said: “I think I’m sure there is.”