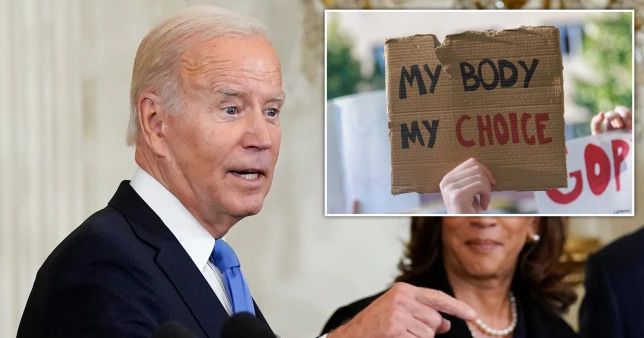 More than a dozen states have passed laws banning or limiting abortion access since the Supreme Court overturned the 1973 Roe v. Wade decision on June 24.

The President said he would urge congress to codify the protections of Roe v. Wade into law, and that his administration would do what it could to protect women’s rights to travel to states where abortion was legal.

‘We’re not going to sit by and let Republicans throughout the country enact extreme policies,’ Biden said.

He also decried Republican efforts to pass federal legislation banning or limiting abortion access. ‘Congressional Republicans are doubling down on their extreme position with a proposal for a national ban,’ Biden said. ‘It means that even if you live in a state where extremist Republican officials aren’t running the show, your right to choose will still be at risk.’

‘Many of these laws would make doctors criminals just for treating a patient,’ the President said. Biden detailed one example of this in Arizona, where a judge restored an abortion ban last week stemming from a law passed in 1864.

‘Two days after it went into effect, a young 14-year-old girl suffering from rheumatoid arthritis and osteoporosis initially couldn’t get a refill for her prescription – the drug she had been taking for years to deal with her diseases,’ Biden said. ‘Because of concerns that that drug could be used to terminate a pregnancy. And that’s exactly what we were afraid would happen.’

Biden also condemned a recent report that found the University of Idaho told staff they could be fired for promoting contraception.

‘Folks, what century are we living in?’ the President asked.

‘It’s clear the Dobbs ruling has sown fear and confusion on our college campuses,’ Education Secretary Miguel Cardona said. Cardona agreed with the president, and said that he was concerned about the effects of the aftermath of the Dobbs decision for students.

‘Students need access to healthcare to thrive in school, and in life,’ he said.

Before closing the meeting to the press, Biden offered a two-part message to the American people. ‘First: we have your back. We’re not gonna step back from this. And second, we’ve heard your voices.’