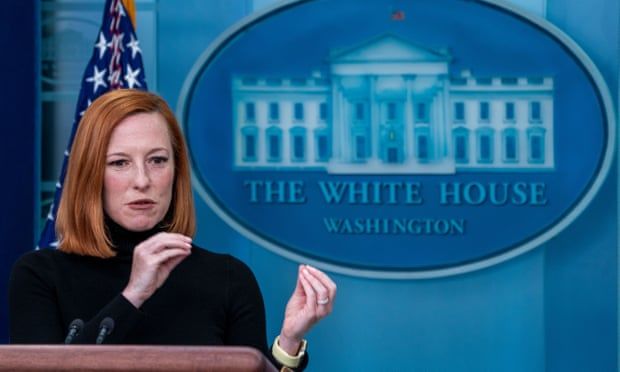 Jen Psaki in tears during interview on Republican anti-LGBTQ ‘cruelty’

The White House press secretary, Jen Psaki, broke down in tears during an interview in which she condemned the “cruelty” of a wave of anti-LGBTQ+ legislation sweeping Republican states.

Known for her toughness at the briefing room podium, Psaki showed a more emotional side during the discussion with Jessica Yellin, host of the News Not Noise podcast, in an interview released on Tuesday.

“They’re doing that in a way that is harsh and cruel to a community of kids, especially,” Psaki said, in tears, after Yellin asked her to “make sense” of the Republican push for legislation that marginalises the LBGTQ+ community.

“I’m going to get emotional about this issue because it’s horrible. But it’s kids who are bullied, and all these leaders are taking steps to hurt them, and hurt their lives and hurt their families.

“And you look at some of these laws in these states and who’s going after parents, who are in loving relationships, who have kids. It’s completely outrageous. Sorry, this is an issue that makes me completely crazy.”

Analysts say the wave of legislation, prominently including Florida’s so-called “don’t say gay” bill, which attacks the teaching of LGBTQ+ issues, is designed to provoke “gender grievance” among voters ahead of November’s midterm elections.

“And the teacher in her classroom, I would hope would say, ‘That’s wonderful. They’re loving parents, and you have a mom and a dad.’

“This is penalising teachers and educators. There are so many layers of this that are outrageous, and I hope people continue to educate themselves on this because it is a bad side of politics.”