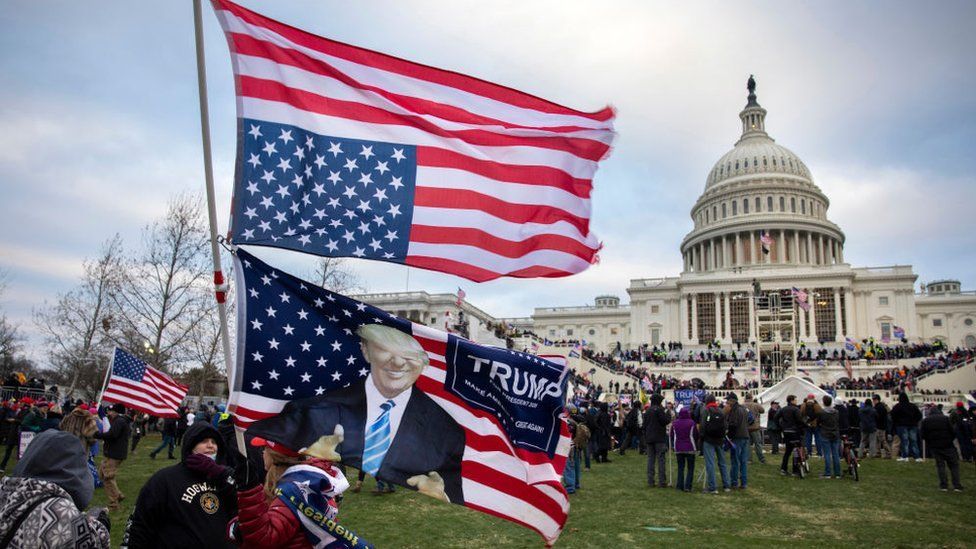 After 11 months, nearly 100 subpoenas and more than 1,000 interviews, the congressional committee investigating the 6 January, 2021, attack on the US Capitol will step out from behind closed doors and hold a series of public hearings to present its findings. The first one is on Thursday.

The Democratic-led committee wants to create a definitive account of the riot and the attempts to undermine the 2020 presidential election results. It could lead to prosecutions and new laws to strengthen election security.

Democrats may also hope the hearings remind Americans of the chaotic Capitol attacks, carried out to buoy a Republican president - and keep that in mind when voters go to the polls for November's midterm elections.

New details will aim to show that 6 January "was the result of a coordinated, multi-step effort to overturn the results of the 2020 election and stop the transfer of power" with former President Donald Trump "at the centre of that effort", select committee aides said this week.

It's been a while since the contentious House of Representatives vote last July creating this committee, after attempts to set up an independent inquiry failed, so here's a quick catch-up for those who may not have been following every twist and turn - leaked and reported - that the committee's efforts have taken.

Who is on this committee?

The panel, chaired by congressman Bennie Thompson of Mississippi, is made up of seven Democrats and two Republicans. Those latter two, Liz Cheney of Wyoming and Adam Kinzinger of Illinois, are staunchly anti-Donald Trump conservatives. They were appointed by Democratic Speaker of the House Nancy Pelosi after she rejected three congressmen suggested by her opposite, Republican minority leader Kevin McCarthy.

Haven't there already been investigations into the Capitol attack?

Yes, there have. Donald Trump's Senate impeachment trial in February 2021 offered a minute-by-minute accounting of the events on 6 January in an attempt to determine whether the former president helped incite the riot. More than 861 charges have been brought against individuals involved in the Capitol attack, with many resulting in plea agreements or guilty verdicts.

Congress has also held several public hearings that covered the events of 6 January. This committee held one last July where they questioned law enforcement officials on their response to the attack.

The stated purpose of this committee, and these hearings, is to provide a comprehensive account of not only the 6 January riot but the "coordinated, multi-step effort" to "overturn" the results of the 2020 presidential election, allegedly led by Mr Trump and some in his circle.

The proceedings are expected to be tightly scripted, in an attempt to avert the style of traditional committee hearings that can often descend into chaos or monotony. The panel has even hired a former television news executive to help with their efforts.

The committee will present footage from 6 January, interspersed with clips of previously recorded testimony, live appearances and excerpts of documents and communications, in an attempt to form a cohesive narrative.

Thursday night's production will include testimony and footage recorded by a British documentary filmmaker who accompanied members of the Proud Boys - a right-wing militant group whose leaders have been charged with seditious conspiracy - before and during the 6 January attack. It will also feature first-hand testimony by one of the police officers at the US Capitol that day.

Members of the committee will also use the evening to outline areas to be covered in future hearings.

"Thursday night is about connecting the dots," said a select committee aide this week. "A lot has been reported, bits and pieces have been shared, but our aim is to tie it together."

"We'll bring the American people back to the reality of that violence and remind them just how horrific it was," the aide said. 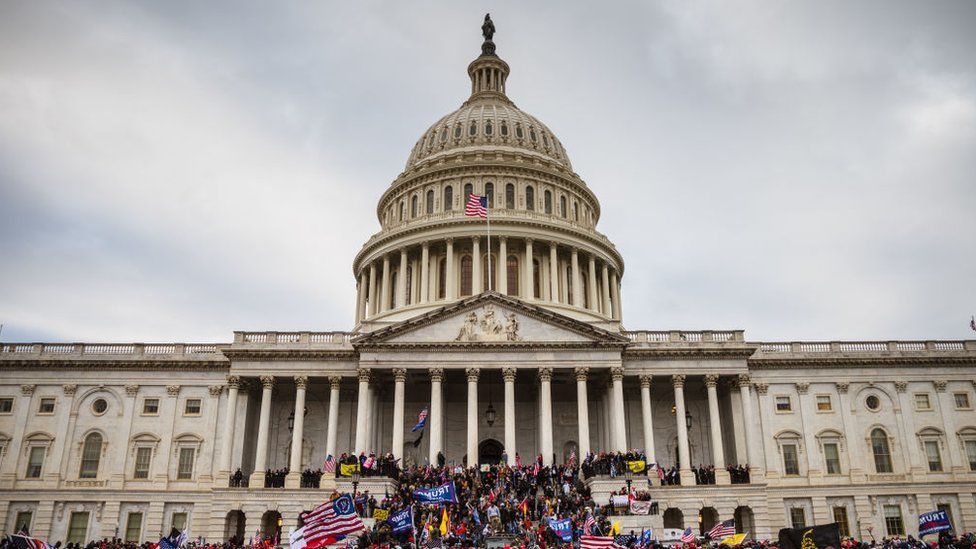 Rioters entering the US Capitol on 6 January

Will there be anything new?

Members of Vice-President Mike Pence's political team, law enforcement officials, individuals who were part of the protests that led to the Capitol attack and Republican officeholders across the US were also questioned.

Pieces of testimony, and of the documents and text messages from Mr Trump's circle, have already leaked to the public.

But there may be new information that can help fill in details.

Select committee aides have said they plan to unveil "a whole lot of new material" including previously unseen documents, video and audio they have obtained.

In particular, investigators have been trying to find out what the president was doing during a three-hour period on that day - from the start of the Capitol attack to the time when he recorded a video address telling rioters to leave the Capitol.

White House logs offer sparse details, but the president made several phone calls - including to House Minority Leader McCarthy and Alabama Senator Tommy Tuberville. The committee has spoken with numerous people who were around the president during that time - and perhaps their hearings will reveal what they learned. It has also subpoenaed Mr McCarthy about his conversation with the former president, but the congressman has refused to comply.

Are Americans going to pay attention?

That will be hard to judge until the first batch of television ratings come out. The hearings will get plenty of media coverage, however. Three US television networks - ABC, NBC and CBS - have already committed to airing at least a portion of the Thursday proceedings. Notably, Fox News has opted to stick with its regular programming - including Tucker Carlson's highly rated but controversial conservative news opinion show.

It takes a lot for political events to cut through and capture the public's attention, however, and these hearings are a drama with a known script and ending.

The challenge for the committee will be making now familiar events seem fresh. To that end, Democrats are attempting to juice interest, organising more than 90 hearing "watch parties" across the US. In Washington, they will project the proceedings on a large screen outside the Capitol itself and provide attendees with free ice cream.

What will the Republicans be doing during the hearings?

Republican officeholders, particularly those most loyal to Mr Trump, are planning "counterprogramming" and a quick response to the committee's presentations.

Members of Congress like Jim Jordan of Ohio and Jim Banks of Indiana - two of the Republicans Ms Pelosi blocked from serving on the committee - will appear on media outlets like Fox News, One America News and Newsmax, and are likely to argue that the hearings are partisan grandstanding.

Many conservatives will argue that Democrats are focusing on the past when they should be addressing pressing concerns like the economy, immigration, trade and crime. 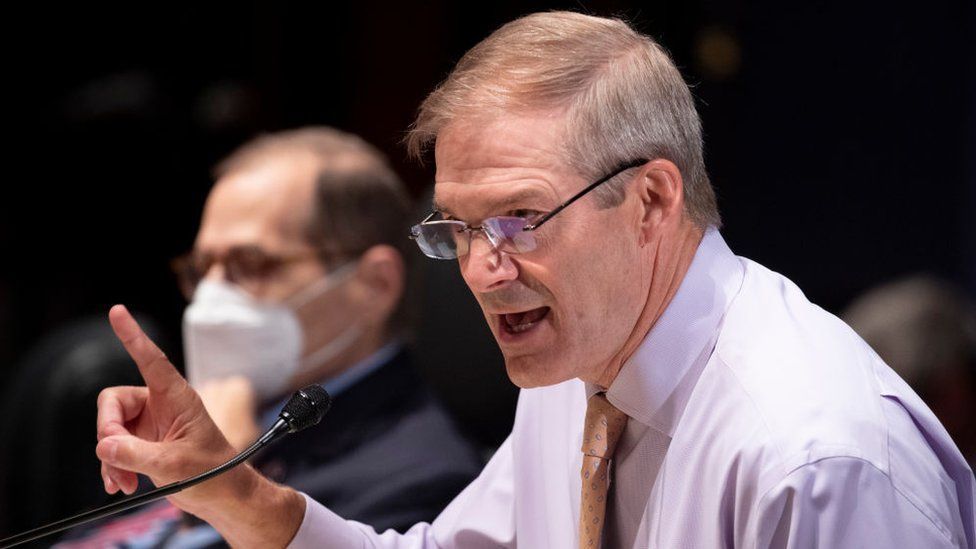 Some Republicans, such as Ohio Representative Jim Jordan, have sought to portray the committee as illegitimate

How long will these hearings go on?

Only the first three hearings - on Thursday night and during the day next Monday and Wednesday - have been scheduled, but committee members say there will be more this month.

What happens after that?

The committee plans to produce a report, and possibly hold another hearing, in September to outline its findings, as well as offer suggestions for reforms to the US electoral process.

There is no set deadline for an end to the committee's work, but Democrats may lose a majority in the House in November's midterm elections and hand over control of the chamber in January. Republicans would be expected to quickly shut down the probe.

Will there be legal consequences?

Although the committee does not have power to bring charges, it can make recommendations and provide evidence to the US justice department, which is conducting its own criminal investigation into the 6 January attack.

It is possible, though far from certain, that the committee could recommend Mr Trump himself be charged with some form of criminal conduct.

In addition to the cases already launched against individuals who breached the Capitol, the justice department has brought charges against two Trump advisers, former White House strategist Steve Bannon and trade representative Peter Navarro, for refusing to comply with congressional subpoenas.

Trump Chief-of-Staff Mark Meadows and advisor Dan Scavino were held in contempt of Congress, but the justice department said it will not prosecute them.

The committee will eventually make legislative recommendations about how to prevent another 6 January from happening, but they haven't yet shared details of what those might be.

What about the politics?

The biggest question may not be the scope of the legal consequences, but the political ones. In the days after the 6 January attack, Democrats predicted - and conservatives feared - that the American public would hold the Republican Party responsible. Since then, however, traditional partisan divides in the US have re-emerged.

Democrats may hope that these hearings remind voters heading to the polls in November of what happened the last time Republicans held the reins of power. At the moment, however, Americans seem more concerned with the price of petrol.