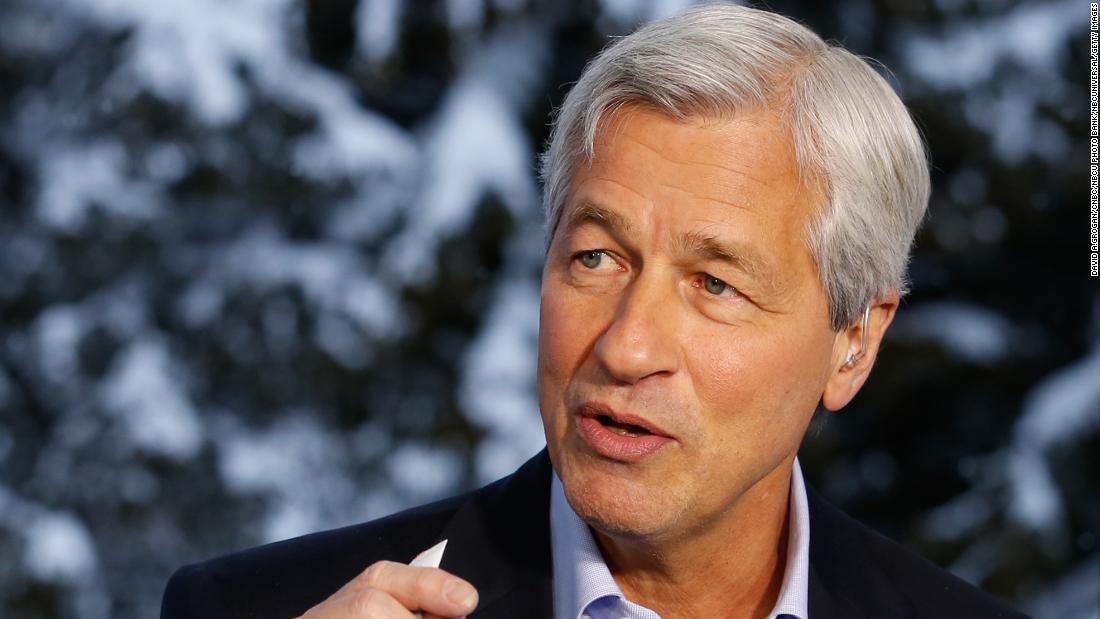 Jamie Dimon sounds the alarm on the future of American prosperity

Jamie Dimon is very bullish on the US economic recovery from the pandemic. And yet the JPMorgan Chase CEO is deeply concerned about the future of America.

In his annual shareholder letter Wednesday, Dimon wrote that the Covid-19 pandemic, the "horrific murder" of George Floyd and the painfully slow economic growth of the past two decades are all symptoms of a broader problem: "inept" public policy and broad government dysfunction.

"Unfortunately, the tragedies of this past year are only the tip of the iceberg — they merely expose enormous failures that have existed for decades and have been deeply damaging to America," Dimon wrote, adding that the nation was "totally unprepared" for the deadly pandemic.

Dimon, one of the leaders of Corporate America and Wall Street, sounds the alarm on the future of American prosperity in the 66-page letter, which represents his most expansive comments to date on policy. He notes that America has faced tough times before — including the Civil War, World War I, the Great Depression and World War II.

"In each case, America's might and resiliency strengthened our position in the world, particularly in relation to our major international competitors," Dimon said. "This time may be different."

In other words, America's rivals, most notably China, could use this moment to catch up.

Don't assume the problems will go away

In a phone interview with CNN Business, Dimon urged the nation to take this moment seriously.

"Are we at a crossroads? I don't know, but I would treat it like one," he said. "The better strategy in life is to assume it is and fix it, rather than assume it will go away."

Dimon suggested the first step is for America to admit it has serious problems.

"Even in business, you don't fix things if you don't recognize you have a problem," Dimon told CNN Business. "We are in a position where we could do a great job — or continue to just muddle through and then we'll all be blaming each other."

Dimon's letter, which includes a roadmap for how to get America back on track, comes as business leaders face pressure to provide moral leadership on major issues, ranging from climate change and voting rights to inequality.

In his shareholder letter, Dimon wrote that America is "clearly under a lot of stress and strain" from various events, including the pandemic, racial unrest, the rise of China and "the divisive 2020 presidential election, culminating in the storming of the Capitol and the attempt to disrupt our democracy."

The JPMorgan (JPM) CEO wrote that China sees an America that is losing ground in technology, infrastructure and education and a nation "torn and crippled by politics," racial and income inequality and unable to coordinate government policies in a coherent way to accomplish goals.

"Unfortunately, recently, there is a lot of truth to this," Dimon said. "Perhaps we were lulled into a false sense of security and complacency in the last two decades of the 20th century as we enjoyed relative peace in the world and a position of global dominance, validated by the fall of the Soviet Union."

Dimon suggested that many of America's problems are self-inflicted and the result of extreme polarization and "broken policy."

"Politics is increasingly divisive, and government is increasingly dysfunctional, leading to a number of policies that simply don't work," Dimon wrote. "The fault line is inequality. And its cause is staring us in the face: our own failure to move beyond our differences and self-interest and act for the greater good."

Dimon: This economic boom could run into 2023

The good news is that Dimon thinks these problems are fixable and he's upbeat on the economic recovery from the pandemic.

"I have little doubt that with excess savings, new stimulus savings, huge deficit spending, more QE [quantitative easing], a new potential infrastructure bill, a successful vaccine and euphoria around the end of the pandemic, the US economy will likely boom," Dimon wrote. "This boom could easily run into 2023 because all the spending could extend well into 2023."

Asked by CNN Business when the last time was that he felt this optimistic about the US economy, Dimon said, "not for a long time."

"The circumstances are quite good, though some people are still being left behind. And we're coming out of COVID, thank God," he said.

The coming economic boom is "good for everybody ultimately," Dimon said, "but it doesn't fix all of our problems."

Dysfunction is slowing down the economy

"It is hard to look at these issues in their totality and not conclude that they have a significant negative effect on the great American economic engine," Dimon said, adding that the "dysfunction" could easily have been a 1% drag on the nation's economic growth rate.

Dimon laid out a series of what he sees as root causes for America's issues, including short-term thinking, an overreliance on economic models, media hype and partisan politics.

"Our problems are complex and frustrating — but they are fixable with hard work," Dimon wrote.

He laid out 15 policies leaders should focus on, including improved wages for low-skilled work, training for jobs, making it easier for those with a criminal record to get a job, better fiscal and tax policy, reforming social safety net programs, reviewing regulatory red tape, modernizing infrastructure, intelligent industrial policy and proper immigration policies.

'We do not have a divine right to success'

In the end, Dimon argued that healthy economic growth "may be the only way out of our current situation" of slow income growth and rapidly rising debt.

If the US economy grew at 3% instead of 2% over a 10-year period, that would lead to $2.3 trillion in additional GDP by the end of the decade, translating to an average increase in household income of about $18,000, according to JPMorgan.

"A 3% growth rate is what we used to have — and it is achievable again," he wrote.

Dimon urged America to roll up its sleeves and address its myriad of problems — before it's too late.

"While I have a deep and abiding faith in the United States of America and its extraordinary resiliency and capabilities, we do not have a divine right to success," he wrote. "Our challenges are significant, and we should not assume they will take care of themselves."