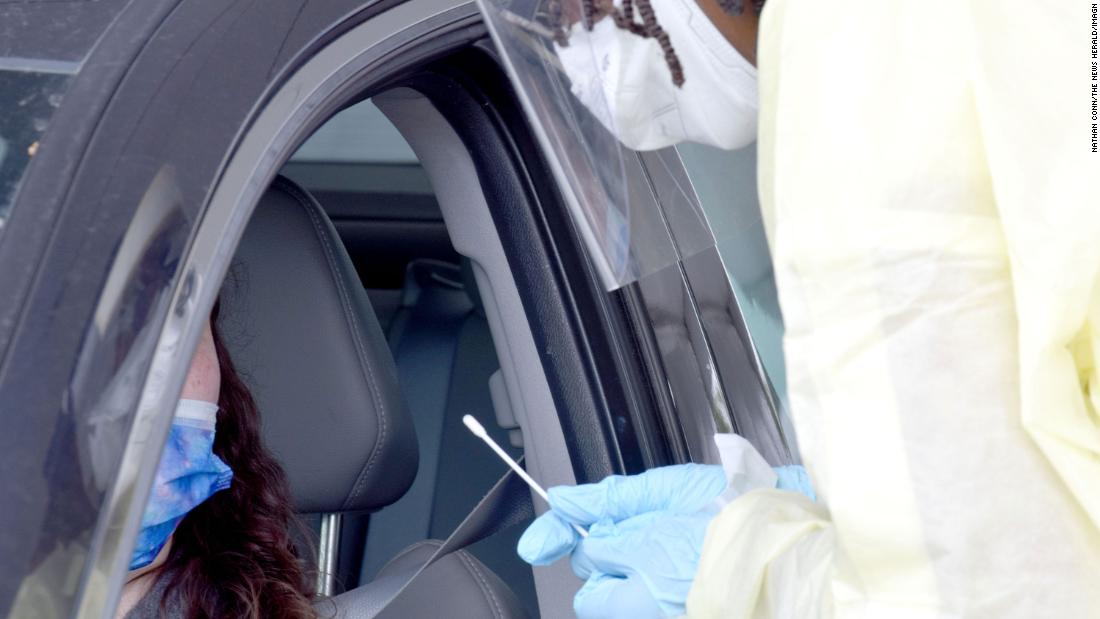 It's not just Delta -- other coronavirus variants worry scientists, also

Coronavirus variants are what keep Dr. Scott Lindquist, an epidemiologist for Washington state, up at night.

And while federal health officials are warning most about the Delta variant -- the B.1.617.2 strain first seen in India -- other variants are also gaining ground in parts of the US.

One of them is the Gamma variant, also known as P.1, which spread fast to dominate in Brazil.

"I am very concerned about the P.1," Lindquist said.

"We've seen it across the state of course, but we're seeing it in some outbreaks in eastern Washington, we're seeing it in counties with low vaccination rates, and I'm very concerned the role that this P.1 is going to take. It has increased its percentage in this state."

So far, none of the most common variants show much ability to evade the effects of full vaccination. But several have shown the ability, both in laboratories and in real life, to re-infect people who recovered from natural coronavirus infection and to infect people who have been only partly vaccinated.

But fully vaccinated people had a strong and broad immune response that should take care of the variants, vaccine experts have agreed.

According to the CDC's own variant tracker, Gamma has been detected in every state where the CDC has variant information. Per most recent tracking data, Gamma prevalence is greater than 15% in multiple regions, including the West and Northeast.

Dr. Philip Chan, consultant medical director with the Rhode Island Department of Health, said while the predominant strain in the state is still the Alpha variant--also known as B.1.1.7 and first identified in the United Kingdom--the Gamma variant is common in Rhode Island.

According to the California Department of Public Health, Gamma accounted for 10% of all sequenced specimens in May, and "has been increasing in all regions of California."

"Public health officials are concerned about the Gamma variant and several other variants of concern, including Alpha and Delta, that have been increasing in frequency in California and may have moderately decreased response to some antibody treatments or be more transmissible," the department told CNN in an email.

In Illinois, Gamma accounts for more than 25% of sequenced variants, according to state health data. According to NowCast data from the US Department of Health and Human Services, Gamma prevalence in the US has steadily increased since mid-March.

In nine states, HHS has halted the distribution of two monoclonal antibody treatments from Eli Lilly and Co, citing reduced effectiveness against both the Gamma and Delta variants.

"Results from in vitro assays that are used to assess the susceptibility of viral variants to particular monoclonal antibodies suggest that bamlanivimab and etesevimab administered together are not active against either the P.1 (Gamma) or B.1.351 (Beta) variants," HHS said on Wednesday.

According to the CDC, the Gamma variant exhibits "significantly reduced susceptibility" to the Lilly treatment, and reduced neutralization from post-infection and post-vaccine immunity.

"If you're not vaccinated or if you've only got a single dose of vaccine, you have vulnerability," Hotez, Dean of the National School of Tropical Medicine at Baylor College of Medicine, told CNN.

Hotez said the impact on immunity is linked to the mutations -- three of them -- that change the shape of the virus in the variant, making it harder for immune system proteins called antibodies to recognize and latch onto it.

"The more antibody-resistant variants have the potential to cause some problems for vaccine protection," John P. Moore, professor of microbiology and immunology at Weill Cornell Medicine, told CNN.

Moore said in a ranking of some key variants, Gamma has been shown to have greater resistance to antibodies than Alpha, but comparable resistance to Delta.

"It doesn't mean that it's going to blow away vaccine protection in the States," he said.

"The two-dose, Pfizer and Moderna, should be able to deal with this variant quite well, because they're so potent. J&J might run into some problems, but would probably still have enough potency to keep people out of the ICU, which is the most important thing," Moore said.

However, the spread of variants creates an environment where the strength of vaccination may not last forever.

"The concerning part of all these variants, is that they keep appearing," said Ramon Lorenzo Redondo, an infectious disease specialist at Northwestern University's Feinberg School of Medicine. He said that in areas where vaccination is low, variants could spread, replicate and evolve even faster.

"In that situation, you could push the virus to adapt ... not only to transmit faster-- they can -- but also to evade immunity," he said.

"Some of these lineages that have already evolved to evade, at least, natural immunity. Still, they are not able to evade a vaccine- produced immunity," he said. "If you allow these high number of cases in non-vaccinated, countries or non-fully-vaccinated countries, you are entering into a danger zone."

Any time a virus is infecting someone, it is replicating and evolving -- and eventually, a variant strongly resistant to vaccines could emerge.

One in a field of many variants

That's why the White House is pushing so hard for people to get fully vaccinated.

"What we are observing in a highly vaccinated population, especially in the US, is that all of these lineages are being controlled," Redondo said.

"So even (with) these highly transmissible (variants), if you have good vaccination coverage, it looks like so far, nothing is going to get out of control."

Variants can also drive one another out of existence.

Moore told CNN that Delta has shown an ability to "outcompete" other variants of Covid-19.

"It blew away the Alpha infection incidents in the UK at the end of last year," he said -- one of many instances where variants have taken over from each other.

"We don't know whether Gamma has that capability," he said.

"If Delta really takes over, which a lot of people think it might in the States based on what we're seeing in the UK in particular, then Gamma might just get squeezed out. And so, it makes it hard to predict the future. So we don't have the information on the relative transmissibility of Gamma."

Vaccines are still our best shot

The spread of variants, including but not limited to Gamma, should reinforce the need for everyone to get fully vaccinated, Moore said.

"When you're dealing with states like Alabama, Arkansas, Mississippi -- that part of the country where vaccine uptake is low -- people there are very vulnerable to a more transmissible variant like Delta, if it takes off, (or) Gamma."