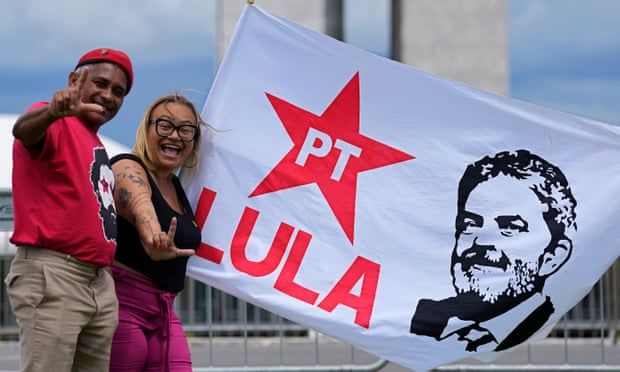 ‘It’s going to be wild’: Brazil braced for ‘Lulapalooza’ as new leader kicks off reign with huge party

They are billing it as Lulapalooza – a momentous explosion of Brazilian politics and dance – and Mayse Freitas wouldn’t miss it for the world.

“I think it’s going to be the greatest show on earth … It’ll be the happiest day of my life,” said the social activist from the Complexo do Alemão, one of Rio’s largest favelas, as she geared up for the festivities.

The source of her joy is the demise of Brazil’s ultra-conservative president Jair Bolsonaro and the extraordinary political resurrection of his leftist successor, Luiz Inácio Lula da Silva, who will take power on Sunday during the musical extravaganza in the capital, Brasília.

“It’s going to be wild,” said Freitas, 64, one of hundreds of thousands of Lulistas flocking to the event from across Latin America’s largest nation. “I’m not one to cry but I think I’ll have to take a sedative to control the emotion I’m going to feel.”

Progressive jubilation over Brazil’s fresh start has been tempered by the loss of football king Pelé, whose public wake will be held on Monday in the city of Santos after three days of official mourning.

Bolsonaro, who last week declared the mourning period, paid tribute to a man who “transformed football into art and joy”, while Lula tweeted: “There had never been a number 10 like him.”

Nevertheless, Freitas’s thoughts were turning to what many hope will be a brighter future under the president-elect, who narrowly beat his rival in October’s election.

“Lula’s one of us. Lula’s a human. He is humanity,” she said, remembering the social advances of his two-term presidency, from 2003 to 2010, when Lula-led policies helped downtrodden favela residents improve their lot. “He is the exact opposite of this sleazebag who has been governing for the last four years.”

Freitas is far from the only Brazilian harbouring such feelings.

For many of the 60m citizens who voted Bolsonaro out of office, the former paratrooper’s defeat was a pivotal victory over an aspiring autocrat bent on shattering Brazil’s young democracy, as well as its international reputation.

“This is a historic and a unique moment,” said Jonas Di Andrade, 29, a journalist and activist who is also heading to Lulapalooza to celebrate a politician he credits with helping him become the first member of his family to study at university.

“These were four extremely difficult years during which we went into survival mode – above all in the favelas,” Andrade said. “Bolsonaro represents the past: a past of oppression, of colonisation, of the enslavement of bodies and minds, of violence, of hostility, of extermination.”

Overseas, there is also contentment at the return of Lula, a moderate leftist of the Worker’s party (PT), whose political career had seemed dead and buried when he was jailed in 2018 on corruption charges that were later quashed. 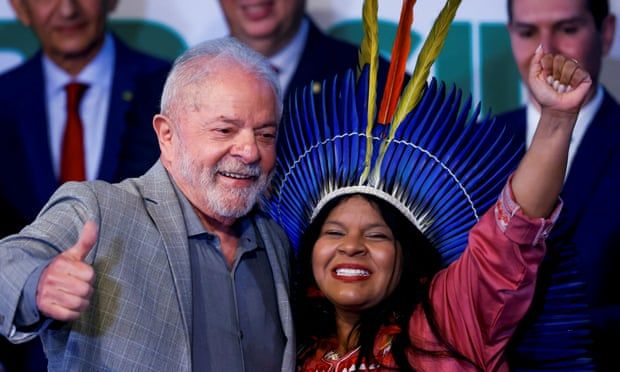 Brazilian president-elect Luiz Inácio Lula da Silva with Sonia Guajajara, nominee for minister of Indigenous Peoples, on 29 December.
More than 60 high-level delegations are set to attend Lula’s inauguration compared with 18 when Bolsonaro took power – a sign of global relief over the exit of a radical leader whose assault on the Amazon made Brazil an international pariah.

The guest list includes King Felipe of Spain, the presidents of Germany and Portugal, and Latin American leaders including Argentina’s Alberto Fernández, Bolivia’s Luis Arce, Chile’s Gabriel Boric, Colombia’s Gustavo Petro and Venezuela’s Nicolás Maduro, whose international rehabilitation has been helped by the election of a succession of leftists in the region.

The French president Emmanuel Macron is expected to make a state visit in early 2023.

Some of Brazil’s top artists are also heading to Brasília to sing in their country’s new era, among them the drag queen Pabllo Vittar, the sambista Martinho da Vila, and the Amazon star Gaby Amarantos.

“My heart is filled with hope,” said Amarantos, who believed Lula’s return would spark a “cultural revival” that would make Brazilians once again proud of their nationality after four years of international ignominy under Bolsonaro.

“There is so much to rebuild,” she added. “But we can now see light at the end of the tunnel.”

There is, however, anxiety over possible extremist attacks at Lula’s 1 January festa.

Freitas, who met Lula when he took his campaign to the Complexo do Alemão, said she felt anxious about being targeted by pro-Bolsonaro fanatics in Brasília. Relatives had urged her not to go.

“What happens if a Bolsonarista gets on the bus trying to trick everyone and does something?” her seven-year-old grandson had fretted.

Lula, whom allies have reportedly urged not to travel to his inauguration in the convertible Rolls-Royce Silver Wraith normally used, has tried to calm supporters, rejecting the idea the celebrations would be marred by rightwing “rowdiness”.

“Don’t worry about all this noise. Those who lost the election need to pipe down – and those who won have the right to throw a big party,” Lula said on Thursday.

When he became Brazil’s first working-class president in January 2003, a global commodities boom allowed the former union leader to turbocharge social programmes that helped millions escape poverty. Lula left office in 2010 with high approval ratings that led Barack Obama to call him “the most popular politician on earth”.

Two decades later, the economic outlook is less promising and Brazilian society is profoundly divided, with many families split over their support for Lula or Bolsonaro.

“It’s going to take time for him to get things more or less back on track,” Freitas said. “It’s like when your clothes are torn: just putting them back on your body won’t fix them. You have to sew them back together again … stitch by stitch.”

But as the curtain comes down on Bolsonaro, those worries can wait. On Sunday, Freitas just wants to have fun.

“I feel utterly delighted,” she beamed, showing off the bright red T-shirt and cap she would wear to her leader’s big day.

“Democracy has prevailed. The people have prevailed. Brazil will never, ever see another event like it,” she said. “We might have another 200 presidents but we will never see anything like this again.”
Add Comment