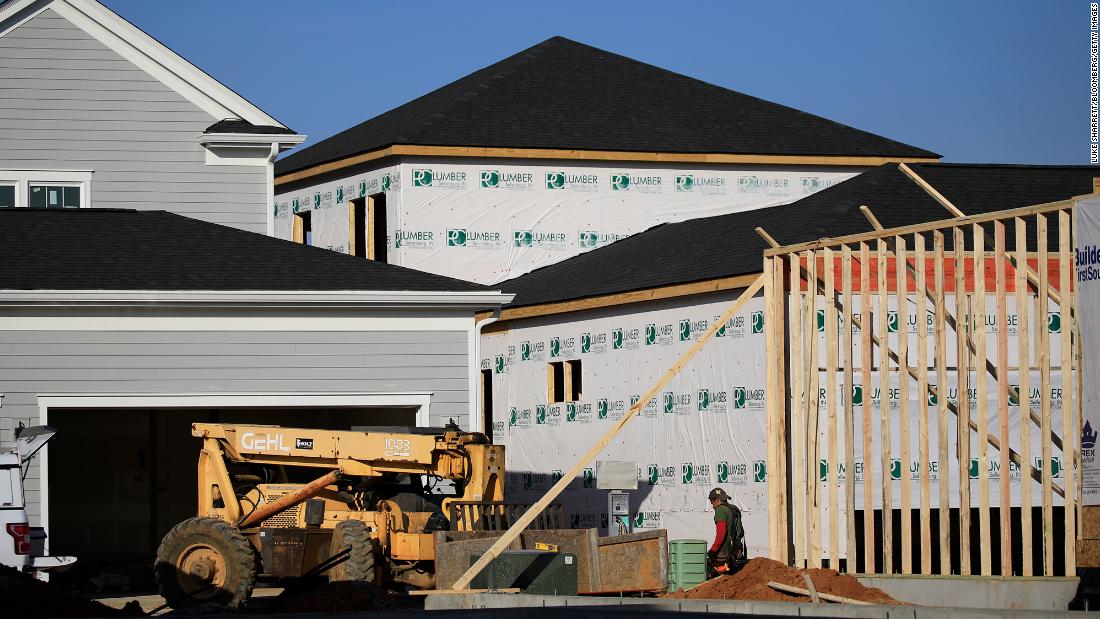 'It's crazy. There is no inventory.' Housing industry veteran marvels at real estate boom

Jeffrey Mezger is a 40-year veteran of the real estate industry. He's never seen a stronger housing market than this one.

"It's crazy. There is no inventory," the CEO of KB Home told CNN Business.

For wannabe buyers, the shortage of homes on the market, combined with a surge of competition from other purchasers is setting off bidding wars, all-cash offers and no end of sticker shock.

But this one-two punch of very low supply and roaring demand is suiting homebuilders just fine.

"This is the best housing market I've seen in my career," Mezger said. "It's a good time to be a homebuilder."

KB Home's first-quarter profit swelled by 62%. It handled more home transactions than in any first quarter since 2008. The company's backlog surged by 74% in value, and nearly doubled in the West Coast.

"There isn't a city we're in where I would say it's a tough market," Mezger said.

Not only is KB Home (KBH) making far more money now than a year ago, it's making more money per home built. Profitability per unit is up 73% year-over-year to $41,000.

It's the polar opposite of what the company faced during the subprime bust that began around 2007, when the housing market was gripped with a massive oversupply problem that took almost a decade to correct. Construction of new homes collapsed in the aftermath of that crisis and never recovered. The supply of new homes remains very low today.

"We've been under-building for the last 15 years," said Mezger.

As of the end of February, housing inventory tumbled by nearly 30% year-over-year to a record low of 1.03 million, according to National Association of Realtors data that goes back to 1982. Last month, homes typically sold in just 20 days — a record low.

Supply is so short that it's limiting the number of homes getting sold. Existing home sales fell by almost 7% between February and March, according to the NAR, which blamed the decline on "historically low inventory."

In February, new home sales tumbled by 18% to a nine-month low. Economists blamed last month's freezing temperatures in parts of the United States but also said the sales drop points to concerns about high prices and affordability.

"Mortgage rates are rising, consumers are shifting spending to reopening activities vs. at-home and we aren't looking at the same degree of pent-up demand as in early 2020," economists at Bank of America wrote in a note to clients this week. "We think housing activity is set to moderate."

Mortgage rates remain very low historically, although they have crept higher in recent months. The average interest rate on a 30-year fixed-rate mortgage hit 3.09% last week, the highest since June.

Higher borrowing costs will help cause housing affordability to decline by 5% to 6% this year, despite strong income growth, according to Bank of America.

Still, housing CEOs remain upbeat, in part because demand is being driven by a new flock of buyers. Millennials make up the largest cohort of buyers for KB
Home, a trend the company said began before the pandemic.

"Post financial crisis, millennials either saw their parents lose their home, couldn't get a job or had a lot of student debt. Millennials deferred their first home purchase much longer than previous generations," said Mezger.

Beyond affordability, one challenge facing homebuilders is skyrocketing construction costs.

Ninety-six percent of builders surveyed in the 2020 National Association of Home Builders survey reported building materials as the top challenge, up from just 66% in 2019.

The No. 1 culprit is the shortage of lumber. Prices for lumber have skyrocketed in recent months because surging demand and shrinking supply, making it much more expensive to build new homes.

The elevated price of lumber alone is adding about $24,000 to the price of new homes, according to the NAHB.

As for KB Home, "We've been able to raise price enough to cover the cost and raise our margin," Mezger said. "Demand is that strong."