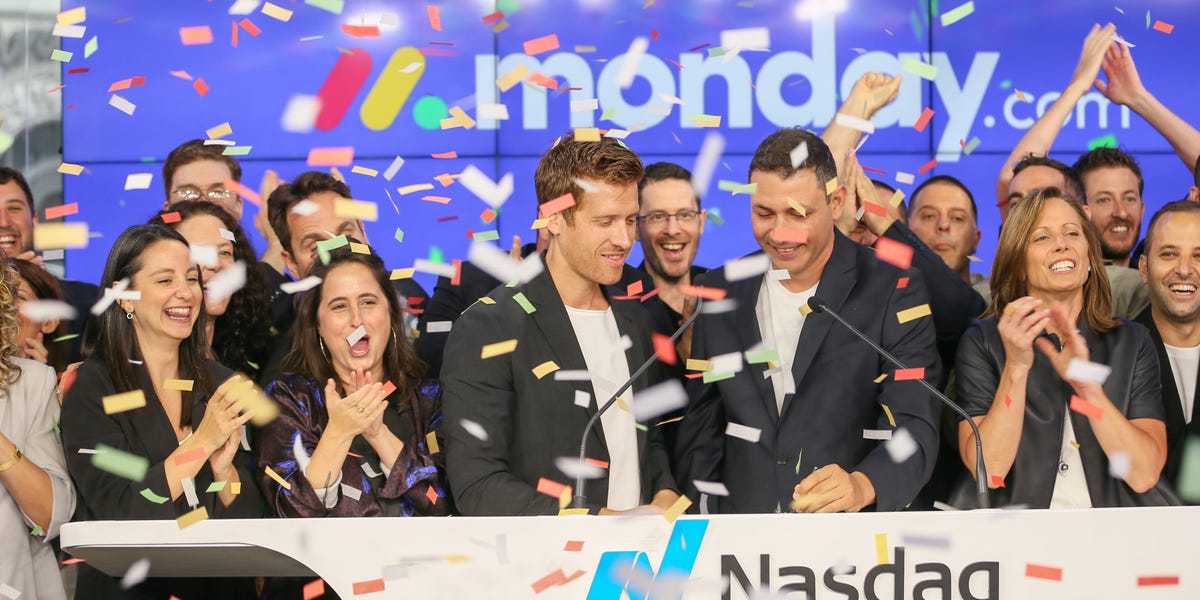 Israeli tech company Monday.com is now valued at $7.8 billion after a successful IPO, and its cofounders say it's all because of a more flexible approach to task management tools

Productivity startup Monday.com, the self-styled operating system for work, made its debut as a public company on Thursday after a successful IPO that saw its stock pop up 15% in the first day of trading.

Trading on Nasdaq under the ticker symbol MDNY, it was valued at $178.78 per share at the closing bell on Thursday, well above its listing price of $155, giving the company a market cap of about $7.8 billion — a significant uptick from the $2.7 billion it was said to be valued at a year ago.

Founded in Tel Aviv in 2012 under the original name "Dapulse," Monday.com makes software for work management to help workers manage projects, tasks, processes and workflows, with companies like Asana, Smartsheet, and Notion as its chief competitors. That kind of tool has been in high demand thanks to the pandemic-driven remote work surge.

"The markets we operate in are so massive and it's such a big opportunity," Monday.com founder and co-CEO Roy Mann told Insider on Thursday.

The company's IPO filings showed strong revenue growth and over 127,000 customers, but also widening losses: The company brought in $58 million in revenue in Q1 of this year, an 85% increase from Q1 last year, and it's on track for over 100% overall annual revenue growth in 2021. However, those filings also showed that its sales and marketing costs in the same quarter were $68 million, bringing it to a net loss of $38 million. Its annual net loss in 2020 was $152 million, up from $92 million in 2019, but those losses are overall a smaller pecentage of revenue.

Mann said that the company sees itself as still being very much in high-growth mode, leading to the accelerated spending on sales and marketing. He says that all things considered, the company has been very strategic and efficient with where it spends those dollars, as an investment in future growth. He also says that half the company's revenue comes outside the US, and it plans to chase that international opportunity.

"We're focused on cash flow efficiency. We continue to capture the opportunity that we have in terms of our market and it makes so much sense to continue to invest," Monday.com founder and co-CEO Eran Zinman said.

From a product perspective, Monday.com competes with its many rivals with a focus on customization, Zinman said. He and Roy Mann were both developers before becoming entrepreneurs, and wanted to make a more flexible tool.

In a fact sheet, the company says that in 70% of the company's sales deals it is not going head to head with other vendors, but rather wins by providing a more versatile alternative to traditional emails, spreadsheets, and meetings. It can also integrate with many other software applications and create automations to speed up mundane tasks without having to write code.

"[Other tools] were all rigid, meaning that we had to use them in a very specific way," Zinman told Insider. "So our vision for Monday was to solve that and using our workOS which is going to have a low-code no-code platform to allow our users to control their own software in a sense."

That vision is what helped it win over investors like Insight Partners, Stripes, Entree Capital, and Sapphire Ventures, who sunk over $243 million in venture capital in Monday.com total ahead of this week's IPO.

The productivity and collaboration market that Monday.com competes in is one of the largest in enterprise software, and its platform approach was a key differentiator, said Sapphire Ventures partner Rajeev Dham, who led Monday.com's 2019 $150 million Series D round.

"They had always taken up more of a platform-like approach versus just a specific application around productivity and collaboration," Dham told Insider.

The company has also won a vote of confidence from Salesforce's venture arm and  Zoom, each of which invested $75 million worth of stock in Monday.com via a private placement in the IPO. With the 15% pop in the stock, both investors' stakes grew to about $86.55 million, according to CNBC. Salesforce seems to have a knack for these kinds of investments, and struck similar deals with Zoom and Snowflake ahead of their own IPOs last year.

Monday.com has an existing relationship with the companies via software integrations, with the investment as an "indication they believe in the company and our vision," Zinman said.

Indeed, the founders view going public as one step in a much longer journey to build a large company.

"We literally feel like we are just getting started," Zinman said.