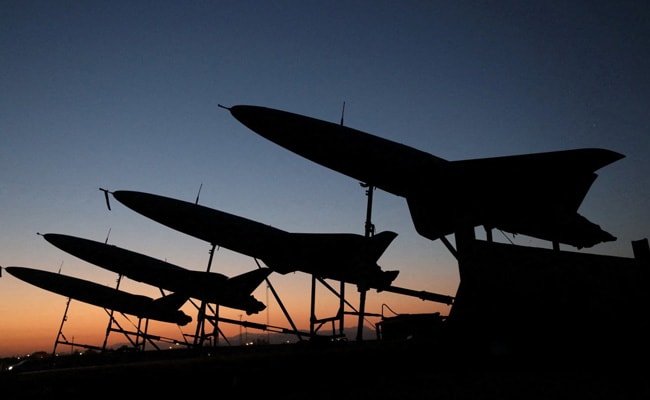 One of the drones Iran agreed to supply is the Shahed-136, a delta-winged weapon used as a "kamikaze" air-to-surface attack aircraft. It carries a small warhead that explodes on impact.

Iran has promised to provide Russia with surface to surface missiles, in addition to more drones, two senior Iranian officials and two Iranian diplomats told Reuters, a move that is likely to infuriate the United States and other Western powers.

A deal was agreed on Oct. 6 when Iran's First Vice President Mohammad Mokhber, two senior officials from Iran's powerful Revolutionary Guards and an official from the Supreme National Security Council visited Moscow for talks with Russia about the delivery of the weapons.

"The Russians had asked for more drones and those Iranian ballistic missiles with improved accuracy, particularly the Fateh and Zolfaghar missiles family," said one of the Iranian diplomats, who was briefed about the trip.

A Western official briefed on the matter confirmed it, saying there was an agreement in place between Iran and Russia to provide surface-to-surface short range ballistic missiles, including the Zolfaghar.

One of the drones Iran agreed to supply is the Shahed-136, a delta-winged weapon used as a "kamikaze" air-to-surface attack aircraft. It carries a small warhead that explodes on impact.

Fateh-110 and Zolfaghar are Iranian short-range surface to surface ballistic missiles capable of striking targets at distances of between 300 km and 700 km (186 and 435 miles).

"Where they are being used is not the seller's issue. We do not take sides in the Ukraine crisis like the West. We want an end to the crisis through diplomatic means," the diplomat said.

Ukraine has reported a spate of Russian attacks using Iranian-made Shahed-136 drones in recent weeks. Iran's foreign ministry on Tuesday dismissed as baseless reports of Iran supplying drones and other weapons to Russia for use in Ukraine, while the Kremlin on Tuesday denied its forces had used Iranian drones to attack Ukraine.

Asked if Russia had used Iranian drones in its campaign in Ukraine, Kremlin spokesman Dmitry Peskov said the Kremlin did not have any information about their use.

"Russian equipment with Russian nomenclature is used," he said. "All further questions should be directed to the Defence Ministry."

The ministry did not immediately reply to a request for comment.

The appearance of Iranian missiles in addition to drones in Moscow's arsenal in the war with Ukraine would raise tensions between Iran and the United States and other Western powers.

The U.S. State Department assessed that Iranian drones were used on Monday in a morning rush hour attack on the Ukrainian capital Kyiv, a U.S. official said. White House spokesperson Karinne Jean-Pierre also accused Tehran of lying when it said Iranian drones are not being used by Russia in Ukraine.

A European diplomat said it was his country's assessment that Russia was finding it more difficult to produce weaponry for itself given the sanctions on its industrial sector and so was turning to imports from partners like Iran and North Korea.

"Drones and missiles are a logical next step," said the European diplomat.

Asked about sales of Iranian surface-to-surface missiles to Russia, a senior U.S. military official said: "I don't have anything to provide at this time in terms of whether or not that is accurate at this point."

Chafing under Western economic sanctions, Iran's rulers are keen to strengthen strategic ties to Russia against an emerging, U.S.-backed Gulf Arab-Israeli bloc that could shift the Middle East balance of power further away from the Islamic Republic.

The top commander of Iran's Revolutionary Guards, Hossein Salami said last month some of the "world's major powers" are willing to purchase military and defence equipment from Iran.

Rahim Safavi, a military adviser to Iran's Supreme leader, was reported by state media on Tuesday as saying that 22 countries want to buy Iranian drones.

Iran's rulers are also under pressure from nationwide demonstrations which were ignited by the death in custody of a 22-year-old woman detained for "inappropriate attire".

Several European Union states on Monday called for sanctions on Iran over its supply of drones to Russia, as the bloc agreed a separate set of sanctions over Tehran's crackdown on unrest.

"They (Russians) wanted to buy hundreds of our missiles, even mid-range ones, but we told them that we can ship soon a few hundred of their demanded Zolfaghar and Fateh 110 short-range, surface to surface missiles," said one of the security officials.

"I cannot give you the exact time, but soon, very soon those will be shipped in 2 to three shipments."

An Eastern European official tracking Russia's weapons activity said it was their understanding that this arms deal was happening, although he had no specific evidence to back it up. The official said that a decision had been taken by the Iranian and Russian leaders to proceed with the transfer.

Moscow had specifically asked for surface to surface short-range Fateh 110 and Zolfaghar missiles, and the shipment will happen in a maximum of 10 days, said another Iranian diplomat.

The stakes are high for Iran, which has been negotiating with Western states to revive a 2015 deal that would ease sanctions on Tehran in return for limits on its nuclear work.

The talks have deadlocked, and any disputes between Tehran and Western powers over arms sales to Russia or Iran's crackdown on the unrest could weaken efforts to seal an accord.

The Western official, who declined to be identified due to the sensitive nature of the matter, said that like the drones, missile transfers would also violate U.N. resolution 2231.

Several senior Iranian officials are outraged about "unjust" planned sanctions on Iran over its arms shipments to Russia, said the second diplomat.

When asked the reason for the refusal, one of the officials cited several issues including "some technical problems".

"Also the (Revolutionary) Guards' commanders were worried that if Russia uses this Arash 2 drone in Ukraine, Americans may have access to our technology."

Oh ya 43 days ago
So if i understand this correctly according to the US everyone can ship arms to the NAZIS in Ukraine but know one can support Russia., i guess in sloe joe and the ho's mind that is fair
View all comments (1)Add comment