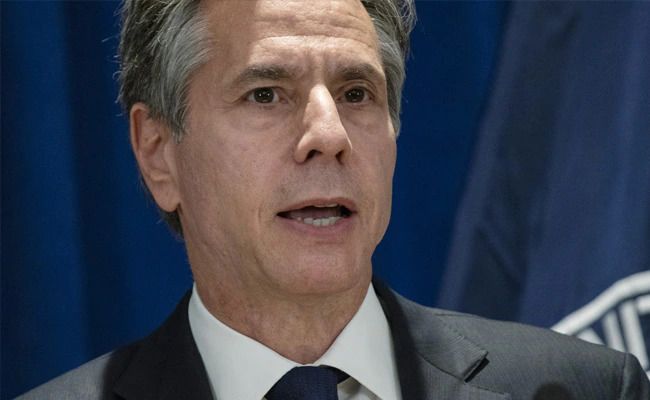 Iran "Does Not Seem To Be Serious": US On Stalled Nuclear Talks

US Secretary of State Antony Blinken warned that Washington would not let its adversary prolong talks while continuing to advance its nuclear ambitions, and would pursue "other options" if diplomacy failed.

The United States hit out at Iran on Friday, saying nuclear talks between the Islamic republic and world powers had stalled because Tehran "does not seem to be serious" about returning to the table.

US Secretary of State Antony Blinken warned that Washington would not let its adversary prolong talks while continuing to advance its nuclear ambitions, and would pursue "other options" if diplomacy failed.

The rebuke came as diplomats paused a seventh round of international talks aimed at reviving the 2015 Iran nuclear deal, with US and European participants voicing concern after five days of negotiation.

"What we've seen in the last couple of days is that Iran right now does not seem to be serious about doing what's necessary to return to compliance, which is why we ended this round of talks in Vienna," Blinken told a virtual conference of world leaders.

"But the window is very, very tight because what is not acceptable, and what we will not allow to happen, is for Iran to try to drag out this process while continuing to move forward inexorably in building up its program."

Blinken's assessment was echoed by President Joe Biden, whose spokeswoman Jen Psaki said the first six rounds had "made progress," but that "Iran's approach this week was not, unfortunately, to try to resolve the remaining issues."

Psaki said Iran had "started this new round of negotiations with a new round of nuclear provocations" reported by the International Atomic Energy Agency (IAEA).

'Time is running out'

She also blamed Biden's predecessor, Donald Trump, for unilaterally pulling the United States out of the deal, sparking a "dramatic and unprecedented expansion" of Iran's nuclear program.

Biden has said he wants to re-enter the deal, and the United States has been participating in this week's talks indirectly.

The landmark accord -- initially agreed between Britain, China, France, Germany, Iran, Russia and the United States -- began unravelling in 2018 when Trump pulled out and reimposed sanctions, prompting Iran to start exceeding limits on its nuclear program the following year.

"Tehran is walking back almost all of the difficult compromises crafted after many months of hard work," said senior diplomats from the "E3" grouping of Britain, France and Germany.

Delegations will now return home before talks resume in the Austrian capital next week "to see whether gaps can be closed or not," the diplomats said.

The E3 "remain fully committed to a diplomatic way forward," they added, but stressed that "time is running out."

The talks are aimed at reviving the 2015 nuclear deal, known as the JCPOA, which was aimed at putting curbs on Iran's nuclear program to ensure it couldn't develop an atomic weapon, in exchange for sanctions relief for Tehran.

Iran has always insisted that its nuclear program is peaceful.

Blinken had already issued a warning about the prospects for an agreement, arguing that it was "not too late for Iran to reverse course."

Israeli Prime Minister Naftali Bennett had used a call with Blinken to call for the "immediate cessation" of the nuclear talks, accusing Iran of "nuclear blackmail."

The talks had resumed in Vienna on Monday after Iran paused them in June following the election of ultraconservative President Ebrahim Raisi.

During this week's talks, Iran submitted two draft proposals on sanctions lifting and nuclear-related measures, presenting them as evidence "of our serious will to reach an agreement."

But European diplomats said there was "no path forward" based on the offer.

The talks could resume in the middle of next week but speaking on a trip to the Gulf, French President Emmanuel Macron hinted that there could be a longer break before negotiators reconvene.

In a telephone call with EU top diplomat Josep Borrell, Foreign Minister Hossein Amir-Abdollahian said the talks were going well "but slowly on all tracks."

Speaking after the end of the latest talks, China's ambassador to the UN in Vienna, Wang Qun, struck a more positive note, saying that "all parties have re-engaged themselves in very substantive terms."

He told reporters outside the Palais Coburg hotel where the talks have been taking place that he hoped the pause in talks "will help to provide further political impetus to the negotiations."