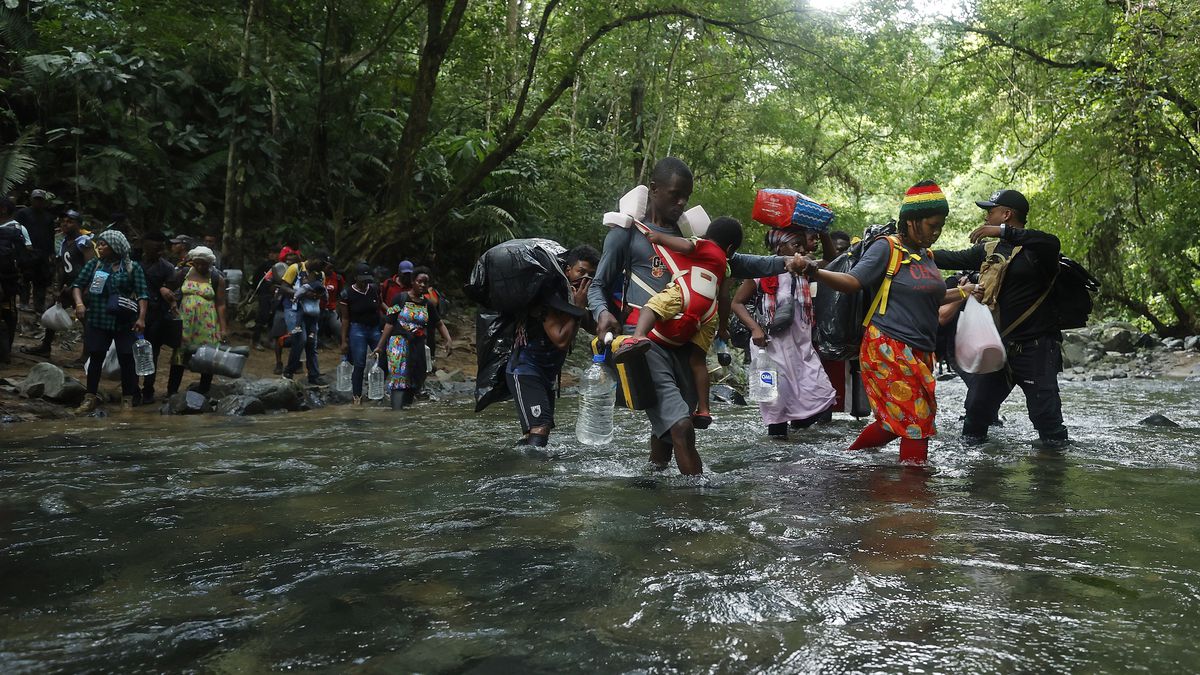 Between January and September 2021, a total of 91,300 people crossed the Darien, "three times the record recorded in 2016," the IOM said.
The International Organization for Migration (IOM) asked this Friday to "redouble" cooperation to address the growing migratory flow in Panama , which in 9 months of this year received 91,300 people who crossed the dangerous Darien jungle, a figure that triples the record 2016.

"There is an urgent need to redouble coordination between governments and international cooperation in order to respond to the humanitarian needs of the population in transit," said IOM Chief of Mission in Panama, Santiago Paz.

The official recalled that "the Global Compact for Orderly, Safe and Regular Migration recommends cooperation between States to be able to respond immediately and coherently to the needs of migrants in vulnerable conditions, and this need is especially evident in the Darien plug ".

Darién, the dense jungle that serves as the natural border between Colombia and Panama, is one of the most dangerous migratory routes in the world, both because of the characteristics of a jungle and because of the presence of organized crime groups that have already used it for trafficking in drugs and weapons.

For years it has been crossed by migrants from all over the world traveling to North America, with traffic peaks between 2015 and 2016, then of Cuban travelers, and now with the mobilization of tens of thousands of Haitians.

Paz pointed out that being able to respond "to the needs of migrants who transit irregularly through Panama poses very significant challenges, especially in relation to the existence of funds to do so."

The Panamanian government, stressed the international official, created "a physical and institutional infrastructure to temporarily house the population in transit and meet the humanitarian needs of this growing migrant population."

In the case of Darién, there are two migratory reception stations (ERM), "where migrants access accommodation and food and where potential cases of covid-19 are monitored." These were built with technical support from the IOM and other international organizations.

THE FIGURES OF THE MOBILITY POPULATION

Between January and September 2021, a total of 91,300 people crossed the Darien on their journey to North America, which "triples the record registered in 2016," the IOM said based on data from the National Migration Service (SNM) of Panama. .

Most were Haitians (56,600), many of them accompanied by minors, followed by Cubans (12,800), Venezuelans (1,500), as well as nationals from Asian and African countries, including Bangladesh, Senegal, Ghana, Uzbekistan, India and Nepal. said the international body in a statement.

The figures reveal an increase in the number of Venezuelan migrants crossing the Darien, with 1,529 between January and September of this year compared to 66 in 2017, and also of minors, since four years ago they represented 2% and in the first 9 months of this 2021 reached 20%.

To North America (the United States, Canada or Mexico), entire families of Haitians are traveling, with children born in Chile or Brazil, countries in which they had settled years ago, and even with babies born during the journey.

Migrants frequently pass through South American countries and "make the crossing in conditions of high vulnerability and are exposed to risks along the migration route, particularly in the Darien Gap," said Paz.

These migratory movements slow down during the rainy season, between May and July, but this year's figures show an increase despite the weather, which poses additional risks for travelers due to the increase in the flow of the rivers, indicated the IOM.

The director of the Panamanian forensic institute, José Vicente Pachar, told Efe on Wednesday that "around 50 migrant deaths" have been registered in Darien so far this year.

In late September alone, a dozen Haitian migrants lost their lives after they were swept away by a swollen river in the Darien province, according to investigations by Panamanian authorities.