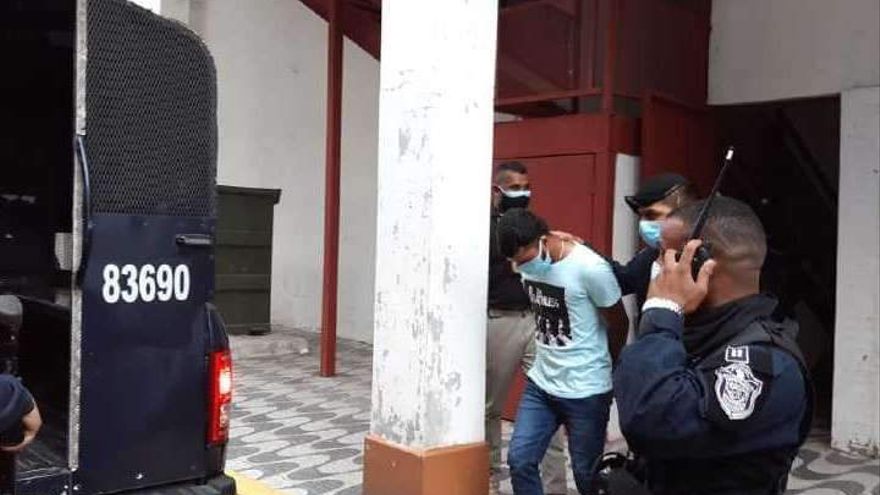 The relatives, neighbors and acquaintances of Miguel Almanza, who was the first detained for the massacre of seven young people in a bunker located in a wooded area of ​​Espinar, in the province of Colón, this morning celebrated the release of the 18-year-old in the vicinity of the Accusatory Penal System.
At the hearing to change the precautionary measure, requested this morning by the defense lawyer, José Moncada, Almanza was released, under the change of precautionary measure from provisional detention.

In addition, other precautionary measures were imposed on Almanza, such as staying away from the Valle Verde sector, where the murdered youths were from; and having to report to the authorities on the 30th of each month.

It should be noted that Almanza had been arrested on July 19 in the Tagua sector, Achiote village, after the other 6 survivors of this bloody event that occurred on July 17 recognized him through a spoken portrait, which included a scar that the accused has on his lips, as advanced by the prosecutor of the Colón Homicide and Femicide Section, Adolfo Pineda.

A few days ago, a second person involved voluntarily surrendered to the authorities and confessed to being a participant in this multiple murder. He also revealed to the authorities his alleged accomplice, who was later captured in the Puerto Escondido sector, both maintain provisional detention while the investigation is on-going into the causes and how the homicides of the seven young people shot dead were carried out.

On August 8, a guarantees judge approved a request from the Public Ministry (MP) to advance evidence to 10 key witnesses in the ongoing investigations into the murder of seven young people in a wooded area in Espinar, Colón province.

The request was made by the prosecutor for Homicide and Femicide of Colón, David Medina, and is supported by the risks in the process, due to the multiple threats to which the witnesses have been subjected.

The hearing of multiple requests, held this Friday before a Judge of Guarantees, was made at the request of the defense of the first person provisionally detained in this case, where the Judge decided to modify the precautionary measure of provisional detention, ordering the prohibition of leaving the country, to approach the victims and periodic report.
Add Comment