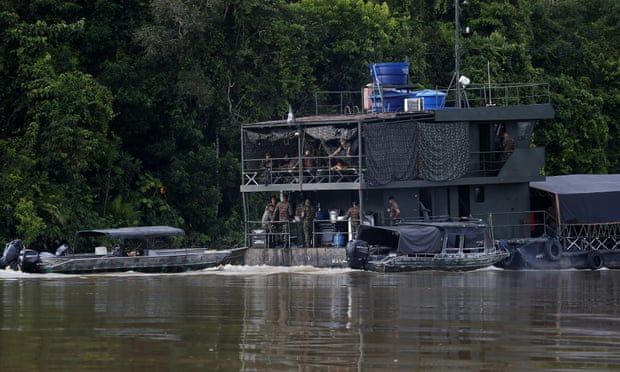 Bruno Pereira and Dom Phillips went missing in the western Amazon, but the search has been called inefficient
Indigenous leaders in the area where a British journalist and Brazilian explorer went missing last Sunday have expressed increasing frustration at the lack of coordination in the search for the two men.

Indigenous expert Bruno Pereira and Dom Phillips, a longtime contributor to the Guardian, were last seen on Sunday morning while traveling by boat on the Itaquaí River in the western Amazon.

They disappeared at the end of a reporting trip but the search was slow to get going and Indigenous leaders criticised the lack of coordination between the different groups sent to the region, including the army, navy and federal police.

“There is no command centre,” said Beto Marubo, a local Indigenous leader.

“They are just going up and down the river, coming and going … they won’t find them [like this].”

The area – a thickly forested region on Brazil’s border with Peru – is home to 26 Indigenous groups and some of them are engaged in the search efforts to locate Pereira, who has spent years helping protect their land from illegal hunters, loggers, and miners.

At least 50 locals on three boats have been scouring the river and its tributaries looking for signs of the two men or the boat in which they were travelling.

They extended their search on to land on Friday but they have little or no contact with the military and fear they are going over each other’s tracks.

The military, Marubo said, should be coordinating the search and using the Indigenous guides strategically.

“Why haven’t they found Dom?” asked Marubo. “Because their searches are inefficient.”

Police so far have arrested one man who was seen threatening Phillips and Pereira the day before they vanished. Amarildo da Costa de Oliveira was detained and his boat, on which traces of blood were found, was seized.

However, police have not yet linked him to the disappearance.

They also announced they had found “apparently human organic material” on the river on Friday but gave no clue whether the find was related to the two men.

They sent the human material and blood for forensic testing and took DNA samples from the families of both Phillips and Pereira.

Orlando Possuelo, an Indigenous expert involved in the search operations, was pessimistic about finding the men alive but insists the efforts must continue.

“We want to find answers for the families,” he said.
Add Comment