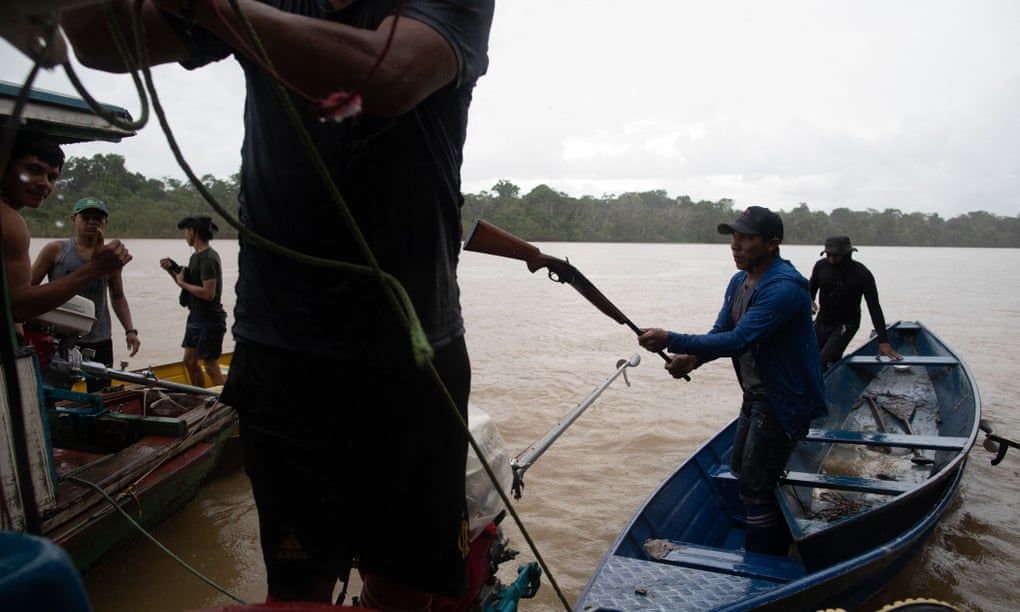 Indigenous activists have been searching for the missing pair since just hours after they vanished, with support from armed members of the military police

Warm rain lashed the speedboat as it barrelled south towards the spot where Binin Matis’s mentor vanished without a trace.

“He was like a father to me,” said the 31-year-old Indigenous leader as his vessel advanced to the U-shaped bend where Bruno Pereira was last seen. “Now he’s gone, I’m not sure what I’ll do.”

Pereira, a celebrated Brazilian Indigenous expert, disappeared early last Sunday while returning from a reporting trip deep into the Amazon with the British journalist and longtime Guardian collaborator Dom Phillips. 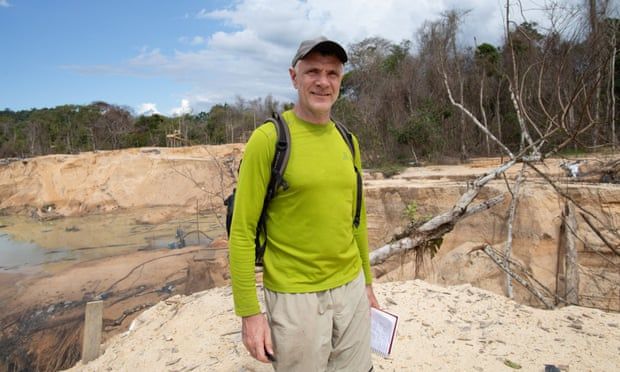 Four days later, young Indigenous men like Matis – who Pereira was training to use technology to protect his people’s ancestral lands from environmental criminals – were spearheading the search.

“I wish we could find them or at least some sign that might give us hope,” Matis said on Thursday afternoon as he journeyed downriver to a jungle-flanked stretch of the River Itaquaí where that operation is focused.

As he scanned the brown waters, Matis said he was on the lookout for even the tiniest suggestion that Pereira and Phillips might have been there: a backpack or T-shirt, a can of oil, a lifejacket or perhaps the seat of a boat.

Yet there was nothing but the occasional submerged tree trunk to be seen in the river that meanders towards the Javari Indigenous Reserve, whose inhabitants Phillips was in the region to interview.

Twenty-four hours earlier, the search team’s pulse quickened when they saw vultures circling over the rainforest canopy. But when they followed the trail into the jungle their hopes were dashed. “It was just a dead monkey and the vultures were eating it,” Matis said, vowing to push on with the manhunt despite the lack of progress.

Further along the murky river, a cluster of boats had been moored on its western shore. Onboard the largest, sat the man helping coordinate the search and rescue mission – a 37-year-old Indigenous specialist called Orlando Possuelo.

With support from heavily armed members of the military police, two dozen Indigenous men have spent this week scouring the region’s forests and rivers for the missing pair, under Possuelo’s command. 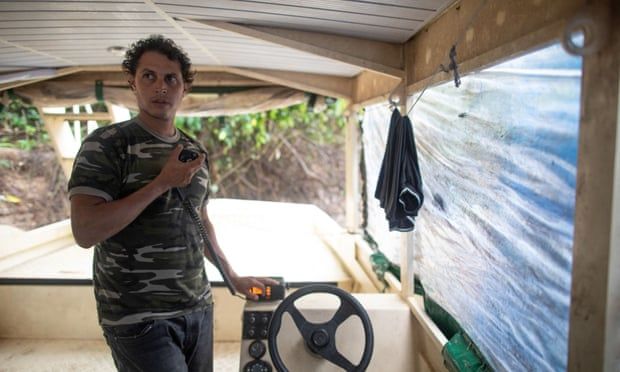 Orlando Possuelo in the Javari Valley on 9 June 2022.

“We’ve been here since Monday,” said the indigenista, son of the legendary explorer and Indigenous defender Sydney Possuelo. “This is the region where he was last seen.”

Possuelo, a close friend of Pereira, recalled how exactly a week earlier he had helped the two missing men load their bags on to a boat as they began their three-day trip along the River Itaquaí.

When they failed to return to their starting point – the isolated rivertown of Atalaia do Norte – by the agreed time on Sunday morning, Possuelo set off downriver to find them, fearing they had suffered an accident.

“My first thought was that their engine had broken … I was looking for a broken-down boat, or one that had run out of petrol – something like that.” 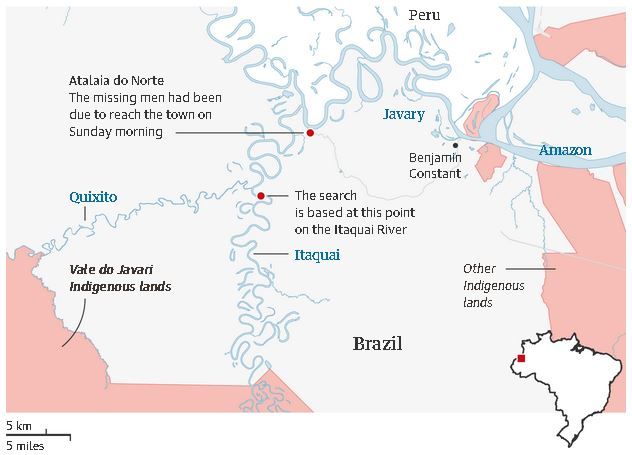 As the hours and days went by, darker thoughts began to swirl. When Possuelo made it home, after three fruitless hours trawling the river, he started “to fear something really bad had happened”.

Carol Santana, a legal adviser to the Javari Indigenous association, said activists were now firmly focused on the theory that the pair had been the victims of “forced disappearances”.

“We are not necessarily saying they’re no longer alive,” emphasised Santana, a lawyer who is also representing Pereira’s wife, Beatriz de Almeida Matos.

But few involved in the rescue mission now believe the disappearances were the result of an innocent accident. Many suspect the men were targeted by the illegal hunting and fishing gangs that are laying siege to the region’s Indigenous lands in search of gold and animals such as pirarucu fish and tracajá river turtles.

On Friday afternoon a judge ordered that a suspect arrested on Tuesday should be held for another 30 days while police investigate whether he is involved. Amarildo da Costa, a fisherman known locally as “Pelado”, was charged with illegal possession of restricted ammunition.

Jair Bolsonaro’s far-right administration, under which Amazon deforestation has soared, appears to be gradually responding to a cacophony of criticism, in Brazil and around the world, for its sluggish response.

In a letter to Bolsonaro this week, editors from some of the world’s leading media organizations, including the Guardian, the Washington Post, NPR and the New York Times, denounced the “minimally resourced” and slow-to-start government search operation.

On Thursday, as Indigenous searchers from four ethnic groups – the Matis, the Marubo, the Kanamari and the Mayoruna – continued their search, grey navy vessels could be seen patrolling the river. A military helicopter soared overhead as white storks lurked on the riverbanks below.

“I’ve got 300 men in the area, two aircraft, 20 vessels. We’ve already spent more than R$0.5M (about £83,000). Just to show that Brazil is taking action, not fooling about,” the justice minister, Anderson Torres, told reporters.

But critics see such efforts as too little, far too late. And Indigenous activists, who have been searching for Phillips and Pereira since just a few hours after they vanished, voiced disgust at Bolsonaro’s suggestion that the pair had themselves to blame for embarking on such an ill-advised “adventure”.

“They went off on an adventure – we’re sorry if the worst has happened,” Bolsonaro said on Thursday before meeting the US president, Joe Biden, at the Summit of the Americas.

“The one who’s out having an adventure is the president who squanders public money riding around on jet skis and motorbikes, when that money could be spent on healthcare,” said Indigenous lawyer Eliesio Marubo, remembering how nearly 670,000 Brazilians have died from Covid, a disease Bolsonaro has downplayed.

As the coronavirus catastrophe swept Brazil, Phillips was also reporting on another calamity that has accelerated since Bolsonaro’s shock 2018 election: the decimation of the world’s largest tropical rainforest. Phillips’s journey to the Javari region was one of the final pieces of reporting he had planned for a book he was writing on the environmental crisis – and potential solutions.

“I was crazy for him to finish the book so we could start working on other things together,” said João Laet, a Brazilian photographer with whom Phillips has reported extensively on the environmental emergency unfolding in the Amazon.

As he retraced his friend’s final footsteps to the spot where the missing men were last seen, Laet spoke of the “enchantment” they shared for the original inhabitants of Brazil’s rainforests and Phillips’s belief that Indigenous communities needed empowering by people such as Pereira so they could repel the growing assault on their lands. “Dom was absolutely convinced of this.”

Laet insisted he had not given up hope that Phillips would return to finish his book. “I have great faith,” the photographer said.

But as the sun set over the jungle there was no sign of a breakthrough. “We’re doing our best,” said one rain-soaked Matis searcher as he clambered back into Possuelo’s floating search base near the village of Cachoeira, accompanied by five rifle-toting police guards. “But we’ve not found a single trace.”