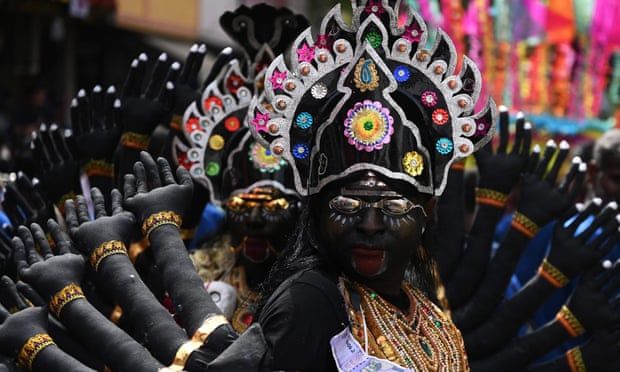 An Indian film director is facing police investigation over the poster for her new film, which depicts the Hindu goddess Kaali smoking a cigarette and clutching an LGBTQ+ flag.

Leena Manimekalai, an Indian film-maker based in Canada, has received thousands of threats of violence after the poster for her short film Kaali, which was aired in the Canadian city of Toronto at the weekend, went viral on social media.

A hashtag reading “arrest Leena Manimekalai” began trending, and on Tuesday two police cases – one in the Indian capital, Delhi, and another in the neighbouring state of Uttar Pradesh – were filed against the director and others involved in the film for a “disrespectful depiction” of a Hindu god and allegedly “hurting religious sentiments”.

The Indian high commission in Canada said it had received complaints from members of the Hindu community over the poster and it “urged Canadian authorities and the event organisers to withdraw all such provocative material”.

Manimekalai wrote and directed the film as part of her graduate film studies at a Toronto university. In the piece, the goddess Kaali inhabits Manimekalai’s body and wanders the city streets in a search for belonging. In a scene pictured on the film’s poster she shares a cigarette with a homeless man while dressed as the goddess.

The Aga Khan Museum in Toronto, which hosted the screening of the film, issued an apology, saying the film and poster had “inadvertently caused offence to members of the Hindu and other faith communities”.

Manimekalai, who was raised as a Hindu in the south Indian state of Tamil Nadu but is now an atheist , denied that her film was disrespectful to the goddess or to Hinduism. She defended her right to cultural freedom and freedom of expression in her art, and said she “vehemently opposes censorship that comes within and from outside”.

She said: “In rural Tamil Nadu, the state I come from, Kaali is believed to be a pagan goddess. She eats meat cooked in goat’s blood, drinks arrack, smokes beedi [cigarettes] and dances wild … that is the Kaali I had embodied for the film.”

In the days since the film’s poster appeared online, Manimekalai said she, her family and collaborators had received threats from more than 200,000 accounts online, which she described as a “grand-scale mass lynching” by rightwing Hindu groups.

“I have all rights to take back my culture, traditions and texts from the fundamentalist elements,” she said. “These trolls have nothing to do with religion or faith.”

Manimekalai’s film is the latest in a long line of projects, from films and TV series to adverts, comedy and theatre, that have been accused of “hurting Hindu religious sentiments” in India in recent months, in what many see as a rapid erosion of freedom of expression and the cultural sphere under the Hindu nationalist Bharatiya Janata party (BJP).

At the weekend a theatre performance in the state of Karnataka was halted by a rightwing Hindu vigilante group because it contained Muslim characters and showed a Hindu-Muslim relationship.

Manimekalai’s debut feature, Sengadal, and her follow-up film, Maadathy: An Unfairy Tale, came up against the Indian censorship board. The director was also one of few who spoke out as part of the #MeToo movement, and has accused another film-maker, Susi Ganesan, of sexual harassment. Ganesan filed defamation charges against her, and she temporarily had her passport impounded.

“It feels like the whole nation – that has now deteriorated from the largest democracy to the largest hate machine – wants to censor me,” said Manimekalai. “I do not feel safe anywhere at this moment.”