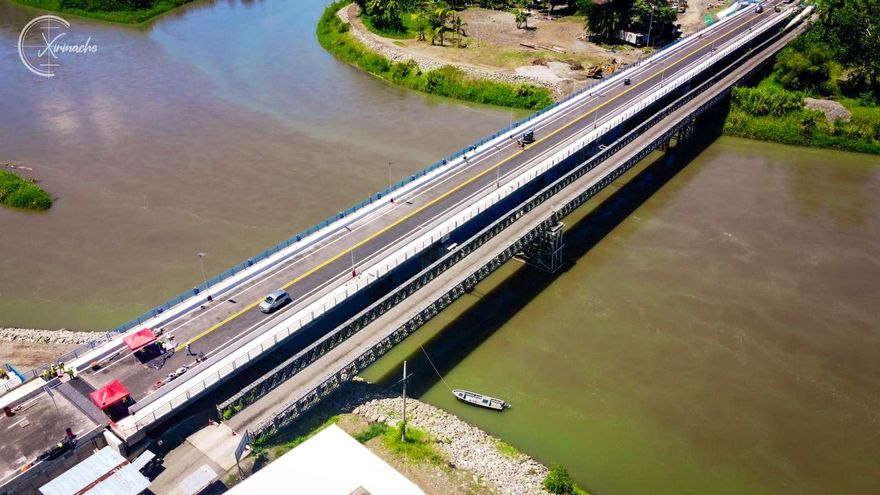 The binational bridge over the Sixaola River, on the border between Panama and Costa Rica, a work of 25 million dollars with financing from Mexico, was inaugurated this Thursday with the aim of improving connectivity, trade and promoting tourism in that area. banana plantation and nearby beaches.
The project was inaugurated by the Foreign Ministers of Panama, Erika Mouynes, and of Costa Rica, Rodolfo Solano, and, together with the Ministers of Public Works Rafael Sabonge and the Costa Rican, Rodolfo Méndez Mata, and the Undersecretary of Foreign Relations for Latin America and the Caribbean of Mexico, Maximiliano Reyes Zúñiga.

The work, which replaces a dilapidated centennial bridge, is 260 meters long and 16.4 meters wide, consists of two lanes, sidewalks and bike paths on both sides, and will benefit at least 15,000 residents of Guabito (Panama) and Sixaola (Costa Rica), according to the United Nations Office for Project Services (UNOPS), the person in charge of the project.

"It is a project that is highly demanded by the communities" in the border area, the UNOPS regional director for Latin America and the Caribbean, the Italian Fabrizio Feliciani, told Efe.

Migration data cited by the UN office indicate that during 2019 a total of 152,070 people crossed this border between Panama and Costa Rica.

"There is a lot of tourism that travels on this side of the border through the nearby beaches", said Feliciani, who stressed that the new structure is "a sustainable bridge, it has two important bicycle lanes," which may contribute to the tourism issue in the future.

In the towns of Guabito and Sixaola there is a high presence of native peoples, blacks and migrants related to the banana activity, all of them with indicators of economic and social development well below national averages, according to UN data .

"We are joining lives! The Binational Bridge over the Sixaola River will positively impact relations between Panama and Costa Rica, forging better social, economic and commercial development," the Ministry of Public Works (MOP) of Panama wrote on its Twitter account.

Construction of the binational bridge began in 2018 at a cost of 25 million dollars, of which 10 million are non-reimbursable resources from the Infrastructure Fund for Mesoamerican and Caribbean Countries of Mexico, while from the governments of Panama and Mexico they contributed 7.5 million dollars each.

One of the greatest challenges was "coordination, it is a trinational project, it is part of a project in Mexico to promote Central American integration (...) it has meant coordinating with 35" Mexican, Costa Rican and Panamanian institutions, "the complexity was very great," Feliciani commented.

The project has been managed and executed by UNOPS, and was built by the Sixaola Binational Consortium, made up of the Meco companies of Costa Rica and the Mexican companies Cal & Mayoi y Asociados and Mexpresa.

At its peak, the work generated up to 250 jobs through a fair hiring of workers from both countries belonging to neighboring communities.
#Erika Mouynes  #Costa Rica
Add Comment