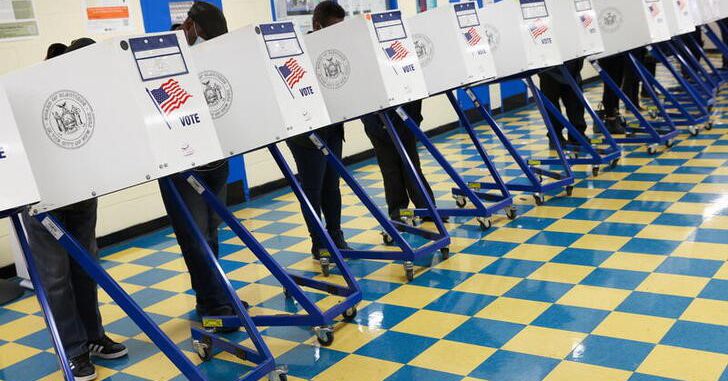 A New York state judge on Thursday threw out the state's new Democratic-backed congressional map as unconstitutional and ordered lawmakers to redraw the lines, a decision that could significantly hurt the party's chances of retaining control of the U.S. Congress in November's elections.
Steuben County Supreme Court Judge Patrick McAllister said the map violated a constitutional provision that districts should not be drawn to favor one political party over another.

The map, passed by the Democratic-controlled legislature and signed into law by Democratic Governor Kathy Hochul in February, gave the party the advantage in 22 of the state's 26 districts, according to analysts. Democrats currently hold 19 of 27 districts and the state will lose one seat this year due to sluggish population growth.

The plan helped offset Republican-skewed maps in states such as Texas and Georgia and went a long way toward erasing what had initially been expected to be a challenging national redistricting cycle for Democrats.

Democratic leaders, including Hochul and state Attorney General Letitia James, said they would appeal the decision.

"This is one step in the process," said Mike Murphy, a spokesperson for the Democratic Senate majority. "We always knew this case would be decided by the appellate courts."

In an 18-page decision, McAllister, a Republican, set April 11 as a deadline for a new map and said he would engage an expert to draw one if the legislature failed to come to a bipartisan compromise.

New York's primary election is scheduled for June 28, and McAllister acknowledged that an expert-drawn map might not be finished in time for this year's elections.

Under U.S. law, states must redraw congressional and legislative lines every decade to account for population changes. In most states, lawmakers control the process, allowing parties to manipulate lines for partisan advantage in a practice known as gerrymandering.

Thursday's decision is the second redistricting setback for Democrats in the span of a week. A Maryland court last Friday tossed a new Democratic-drawn map as an illegal gerrymander.

Democrats currently hold a 222-210 edge in the U.S. House of Representatives, with three vacancies. Opinion polls suggest Republicans are favored to retake the House majority in November, which would allow them to block much of Democratic President Joe Biden's agenda.

In a conference call with reporters, former New Jersey Governor Chris Christie, the co-chair of the National Republican Redistricting Trust, which supports Republican redistricting efforts, said New York Democrats should be "ashamed of themselves for what they tried to do here."
#Joe Biden
Add Comment