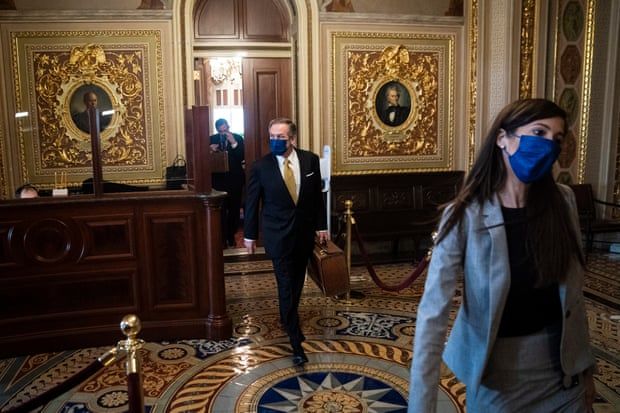 Impeachment lawyers for Donald Trump accused the prosecution of waging a “politically motivated witch-hunt” against the former president, vehemently denying the charge that his words and actions incited the deadly insurrection at the US Capitol as they concluded their sharply partisan defense and prepared for a swift conclusion to the trial.

Confident that Trump’s unprecedented second impeachment trial would again result in acquittal, the defense lawyers channeled the former president’s bombastic style – and his loose relationship with the facts – to denounce the case against him as an “unconstitutional act of political vengeance” fueled by Democrats’ longstanding “hatred” of their client. They claimed the House managers had grievously mischaracterized Trump’s remarks to his followers at a rally on 6 January, when he exhorted them to “fight like hell” during a rally just before they marched down Pennsylvania Avenue in Washington and attacked the US Capitol.

“No thinking person could seriously believe that the president’s January 6 speech on the Ellipse was in any way an incitement to violence or insurrection,” said Michael van der Veen, one of Trump’s lawyers.

At the core of their argument was that Trump’s words and actions were protected under the first amendment. Trump’s language, the defense argued, was no different than the heated rhetoric politicians frequently use in American politics today. To make this point, they showed misleadingly edited clips of Democrats, including some senators seated as jurors in the trial, encouraging their supporters to “fight” in attempt to portray them as hypocritical.

The prosecution has strenuously refuted this contention, arguing that Trump’s conduct directly incited an insurrection against the nation he had sworn an oath to protect, and therefore did not amount to protected political speech.

The defense also sought to portray Trump as the “most pro-police, anti-mob rule president this country has ever seen”, claiming, despite evidence to the contrary, that he had never condoned violence and noting that he also told the crowd to march “peacefully and patriotically” during his 6 January speech.

“This unprecedented effort is not about Democrats opposing political violence. It is about Democrats trying to disqualify their political opposition. It is constitutional cancel culture,” said Van der Veen, a personal injury lawyer. 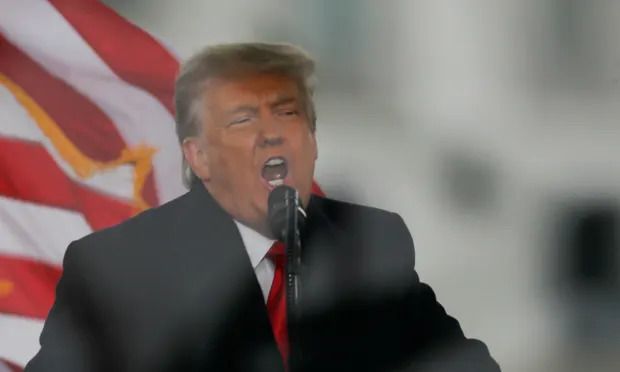 Donald Trump speaks at a rally in Washington DC on 6 January.

Trump’s lawyers used less than three of the total 16 hours allotted to open and close their defense of the president. Following their speedy presentation, the Senate proceeded to a period of questioning the prosecution and defense, the conclusion of which cleared the way for closing arguments and a verdict, perhaps as early as Saturday.

The defense’s presentation on Friday came after the nine House managers, acting as prosecutors, spent two days building a methodical case against the former president that retold the insurrection with harrowing new video. In their presentation, they argued the riot was not the result of one incendiary speech but the culmination of Trump’s desperate bid to cling to power.

Crucially, the managers contended, Trump betrayed his oath of office by failing to intervene once the siege of Congress, where both the House and the Senate were in session, began, and that his “lack of remorse” in its aftermath shows he remains a clear threat to American democracy. 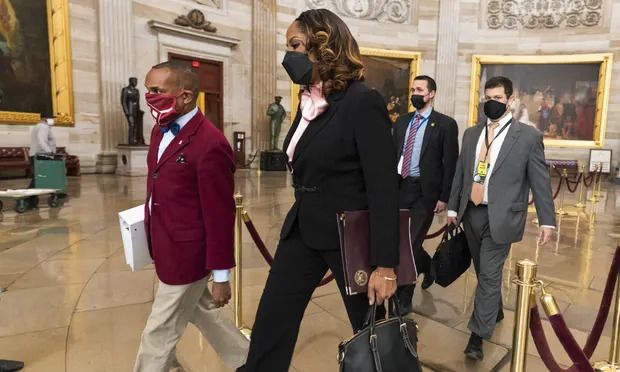 Stacey Plaskett walks through the Capitol Rotunda to the Senate.

“The president of the United States did not defend the Capitol of this country,” Stacey Plaskett, a delegate from the Virgin Islands and one of the managers, told senators on Friday. “It’s indefensible.”

During their presentation on Friday, Trump’s attorneys attempted to redirect the responsibility from the former president solely to the people who laid siege to the Capitol. In a pre-emptive rebuttal, the managers played video of the insurrectionists shouting at police that they had been invited there by Trump, and pointed to several court documents in which rioters charged with criminal offenses have said they were acting at Trump’s behest.

The defense also sought to recast some of the most damning moments of Trump’s presidency, portraying as benign his remark that there had been “very fine people on both sides” of a 2017 neo-Nazi rally in Charlottesville, resisted by counter-protesters. They also defended a December 2020 phone call in which Trump implored the Georgia secretary of state to “find” enough votes to overturn Biden’s victory in the state. The call is referenced in the article of impeachment against Trump, as part of his brazen campaign to reverse his election defeat.

Seventeen Republican senators would have to join with all Democrats to find Trump guilty, an unlikely verdict. A conviction would allow the Senate to then vote to disqualify Trump from ever holding future office.

His team maintained that the trial was unconstitutional because Trump was no longer in office, even though a majority of senators – including six Republicans – rejected that argument after hearing hours of debate on the issue on Tuesday.

Bruce Castor, a Pennsylvania former prosecutor serving as one of Trump’s attorneys, concluded his case with a grave warning about the consequences of convicting the former president.

“This trial is about far more than president Trump. It’s about silencing and banning the speech the majority doesn’t agree with. It’s about canceling 75 million Trump voters and criminalizing political viewpoints,” Castor said, before resting the defense case on Friday. “It is the only existential issue before us.” 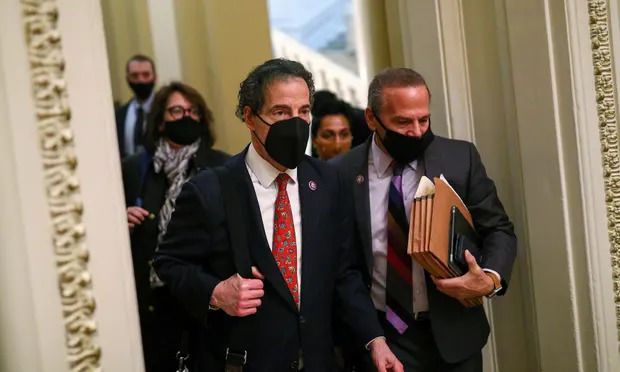 After the defense rested, the senators silently submitted their questions for the prosecution and the defense, leading to a number of heated exchanges – and disputed timeline of events.

During one contentious back-and-forth, Trump’s lawyer said his remarks at the 6 January rally were “totally appropriate”, prompting an impassioned response from Jamie Raskin, the lead House Democratic prosecutor.

“Violence all over the rallies. The president cheering it on, delighting in it, revelling in it, exulting in it. Come on!” Raskin said. “How gullible do you think we are?”

Pressed by multiple senators to elaborate on when Trump first learned of the breach, Van der Veen said Trump was not aware that Mike Pence’s life was in danger when he disparaged his vice-president in a tweet moments after he had been rushed from the Senate chamber.

That timeline was thrown into question earlier this week when Senator Tommy Tuberville revealed that he had informed Trump of Pence’s evacuation during a phone call as the mob closed in on the Senate.

Asked by a senator if the call indicated Trump was “tolerant of the intimidation” of Pence, Van der Veen said it did not, and dismissed the conversation as “hearsay”.

But speaking to reporters after the trial adjourned on Friday, Tuberville, a staunch supporter of Trump, stood by his version of events, though he did not recall precisely what time Trump called.

Trump’s state of mind as his supporters stormed the Capitol is important to a number of senators weighing whether to convict him. On Friday, CNN reported that Trump told House minority leader Kevin McCarthy during an expletive-laced call on 6 January that the rioters were “more upset about the election” than the California Republican was.

Congresswoman Jaime Herrera Beutler, one of only 10 Republicans who voted to impeach Trump, confirmed the account in a statement on Friday night, likely the eve of the vote.

“To the patriots who were standing next to the former president as these conversations were happening, or even to the former vice president,” she said, “if you have something to add here, now would be the time.”

Notunderstander 22 days ago
So maybe one of he Trump-Haters can explain this to a non-american.
An impeachment is directed to an president. A private person (which Trump now should be) cannot be impeached.
An illegal elected (through fraud) president, is also not a legal-elected president, therefore cannot be impeached.
When these people now AGAIN talk about impeaching Trump, that brings me to one conclusion. Trump is STILL President. Moved away from Washington (in the District of Columbio -> D.C.).
Biden is the president of a company settled in the district of D.C. (which is now surrounded by 3m high fences and 20.000 troops). Trump is now the "new" President of the "Old-Republic" which was/is borne again?

EXPLAIN YOURSELF! Dont throw away your tin-foils yet...