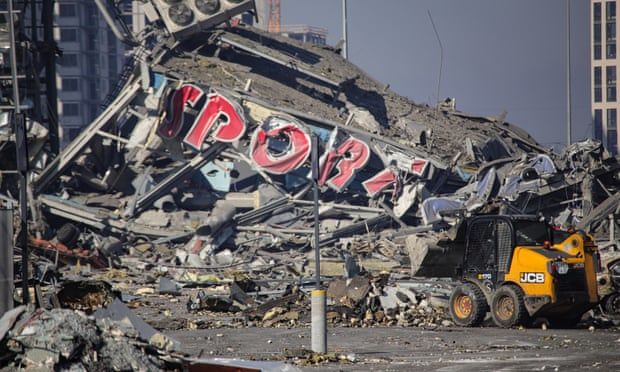 Economic gains made after recovery from Covid pandemic could be erased, says expert

The International Monetary Fund has cut its global growth forecasts because of the war in Ukraine, warning that Russia’s invasion could lead to the fragmentation of the world economy into rival blocs.

In a half-yearly update, the IMF said prospects had worsened “significantly” in the past three months as it reduced its growth estimate for 2022 from 4.4% to 3.6%.

The fund said every member of the G7 group of leading industrialised nations and the bigger developing countries would grow less rapidly this year than previously expected, and there was a strong risk of an even worse outcome.

“In the matter of a few weeks, the world has yet again experienced a major, transformative shock. Just as a durable recovery from the pandemic-induced global economic collapse appeared in sight, the war has created the very real prospect that a large part of the recent gains will be erased,” said Pierre-Olivier Gourinchas, the IMF’s economic counsellor and director of research.

The UK is expected to be the joint-best performer in the G7 this year despite having its growth estimate cut from 4.7% to 3.7%, but is set to be the worst performer next year when the IMF is pencilling in expansion of just 1.2%. Consumer spending is predicted to be weaker than expected as the cost of living crisis bites while tighter financial conditions are expected to cool investment.

The US will suffer the least damage from the war and has had its growth forecast for 2022 shaved by 0.3 points to 3.7%. Germany and Italy, both more exposed to Russia, have had their growth estimates reduced by 1.7 points and 1.5 points respectively, to 2.1% and 2.3%.

Russia is on course for two years of falling output as a result of western sanctions (8.5% this year and 2.3% in 2023), while Ukraine’s economy will shrink by 35% in 2022 and feel the impact of the conflict for years to come, the IMF said in its world economic outlook.

The IMF produces the outlook in April and October, with updates in January and July. Six months ago it was expecting the easing of pandemic pressures to result in global growth of 4.9% this year. 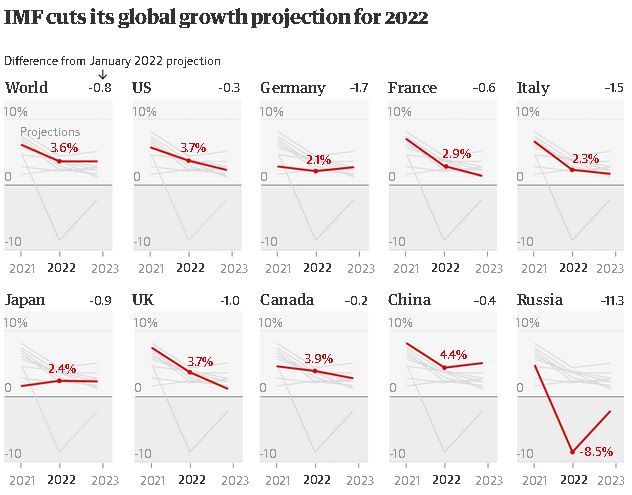 “This crisis unfolds while the global economy was on a mending path but had not yet fully recovered from the Covid pandemic, with a significant divergence between the economic recoveries of advanced economies and emerging market and developing ones. Overall risks to economic prospects have risen sharply and policy trade-offs have become ever more challenging.”

Against a backdrop of soaring inflation fuelled by Vladimir Putin’s war, the Washington-based fund said “decisive actions” to rein in spiralling prices needed to be taken by global central banks. However, it said this process must be clearly communicated to avoid a sudden shift in financial markets.

Publishing its global financial stability report alongside the economic outlook, the IMF warned rates rising further than expected could cause a “sharp decline” in the value of a range of assets. “Financial stability risks have risen on several fronts since the Russian invasion of Ukraine, and they may test the resilience of global financial markets amid huge uncertainties,” it said.

The IMF said a further two percentage points could be shaved off global growth next year in the event the war in Ukraine led to even higher energy prices, entrenched inflation and big losses on financial markets.

Gourinchas said the war had increased the risk of “a more permanent fragmentation of the world economy into geopolitical blocs with distinct technology standards, cross-border payment systems, and reserve currencies.

“Such a tectonic shift would entail high adjustment costs and long-run efficiency losses as supply chains and production networks are reconfigured. It also represents a major challenge to the rules-based framework that has governed international and economic relations for the last 70 years.”

He added: “The economic effects of the war are spreading far and wide … mainly through commodity markets, trade, and financial linkages.

“In many countries, inflation has become a central concern … There is a rising risk that inflation expectations become de-anchored, prompting a more aggressive tightening response from central banks. In emerging market and developing economies, increases in food and fuel prices could significantly increase the risk of social unrest.”

The IMF expects inflation to average 5.7% in advanced economies and 8.7% in emerging market and developing economies this year – 1.8 and 2.8 percentage points higher than projected in January.