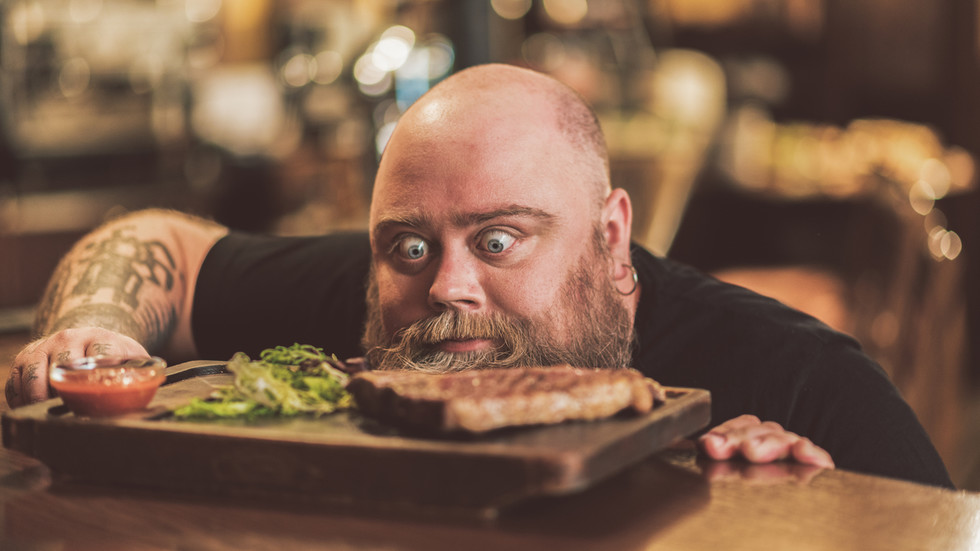 If men ‘only eat steak to feel butch’ and should go vegan, what are we gonna do with a billion cows?

A new study believes some of the world’s environmental problems can be addressed by educating men that eating meat does not define their masculinity. But it’ll take more than woke research to get me to convert to nut roast.

If we all go veggie tomorrow, what the hell are we gonna do with all those bloody cows? I’m not sure I could cope with 600 kilos of living beef in my living room and, anyway, how would I get Ermintrude up the stairs?

Your average dairy cow is as ‘domesticated’ as the family cat and most would die without their farmers. That’s just the way it goes. And there are a billion of the buggers roaming the earth right now, munching away on juicy grass. That’s almost three times more than there are domestic cats, by the way.

What about the world’s 700 million or so pigs? Sheep? There are a billion of those too. And don’t get me started on chickens. Guess how many of them freaky things are cluck-clucking across planet Earth right now? Around 26 billion or so.

Most of those chickens are so genetically malformed towards making as much meat as can fit on their frames that they’d just turn into useless blobs in the wild after a couple of months or so anyway. If nobody ate them, that is.

Anyway, let’s stick with cows for now, as I’m a MAN and therefore a bit partial to a juicy steak. Steak n’ eggs... lovely! And I get to feel so butch afterwards, according to a new piece of vital research. Because blokes, apparently, eat meat ‘to enact and affirm their masculine identity’ say psychologists Daniel Rosenfeld and Janet Tomiyama, of the University of California.

“Our findings suggest that shifting men’s perceptions of ideal gender roles away from traditional masculinity could lead to their reduced consumption of beef and chicken,” said Rosenfeld. “This is particularly promising in the case of beef, given that beef production poses a much greater environmental threat than other forms of meat production.”

It’s me, again! You see? Me and my masculinity, I am personally destroying the planet. It’s all MY fault! One writer was pretty clear about this in The Independent. “As a vegan myself, I know there is no sugar-coating the reality: meat is not a sustainable, or arguably healthy, food source. It is an ongoing system that promotes the undue cruelty and death of animals for the pleasure of humans,” preached Victoria Gagliardo-Silver.

“So, why does it continue to be seen as a symbol of manliness to eat meat? Over the years, I have watched men defend their consumption of meat to insane ends, saying variations of ‘real men eat red meat and punch nerds in the face’. It’s not exactly a cogent line of argument.”

Ah, that’s a pity. Beating up students was something of a sport down my way as a youth. Bullying bespectacled human nerds for a bit of harmful fun is one thing. They can take it – it’s character-building. They should toughen up, maybe eat more meat or try some crustaceans… although there’s a problem with them, too, predictably, and the practice of boiling them alive. Mercifully, Boris Johnson’s new wife is taking care of that. New ‘animal sentience’ laws backed by Carrie Symonds would outlaw that cruel cooking method (although how it would be policed is anyone’s guess).

Anyway, if the meat industry was switched off tomorrow, it seems pretty clear what animal charities such as People for the Ethical Treatment of Animals (PETA) would do with most of that livestock. There would be platoons of crusaders out there in the farmers’ fields armed with needles filled with pentobarbital.

PETA, after all, is no stranger to euthanising animals. Data for an animal shelter at PETA’s headquarters in Norfolk, Virginia, in the US showed that, of 2,421 ‘rescued’ dogs and cats taken in during 2019, a total of 1,578 were put to death.

So, ahead of humanity’s inevitable vegan future, if all these cows and pigs and sheep and chickens and turkeys are gonna die anyway, why not just, you know, eat them?

There is, though – butch, weightlifting carnivores or not – a real problem here. The science is solid and overwhelming: it’s a fact that eating meat, eggs and dairy products damages the environment in loads of ways. Those beasts fart too much, for a start. And all that methane gas goes up into the atmosphere and contributes to global warming. Then there’s the need to flatten forests to create grazing land and grow crops to feed the farting hordes. Plus, over 500 litres of water is required to deliver just a single chicken breast.

The real problem, however, is that there are too many mouths to feed. It seems the human race is a little too successful, and this is all caused by the need to feed nearly eight billion people. But then again, Mother Nature will do what she always does with super-successful genetic mutations – remember the dinosaurs, anyone? She’ll get rid of them. We need to get our facts straight on all this: the world isn’t going to ‘die’ – we are.

I dunno... it hurts my brain, all this, and I’m tired of being told what to do all the time by ‘people who care the most’. I reckon the best approach is to be an optimistic-fatalist.

For example, isn’t the human population gonna start to decline in the second half of this century anyway? I’m sure I read that somewhere. Job done – there will be fewer mouths to feed and half a century or so is the blink of an eye to Mother Nature. Humanity will find a way through it all in the end. Or die trying.

And there’s not a lot we can do about it if a fat white comet whacks into our little green ball and sends her spinning into the sun. It’s just an intergalactic game of snooker. The universe simply doesn’t care.

Anyway, I need a masculine energy boost just to think about it all, so I’m off to the supermarket. Steak ’n’ eggs, anyone?