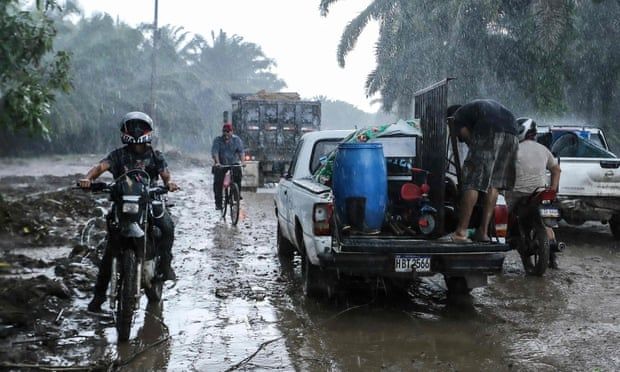 Hurricane Julia swept by just south of Colombia’s San Andres island on Saturday evening soon after strengthening from a tropical storm, as Nicaraguans rushed to prepare for the storm’s arrival on their coast overnight.

After gaining power throughout the day, Julia’s maximum sustained winds had increased to 120km/h (75mph) by Saturday evening, the US National Hurricane Center said.

The storm was centred about 30km west-southwest of San Andres and 200km east-northeast of Bluefields, Nicaragua, and was moving west at 28km/h.

The Colombian president, Gustavo Petro, had declared a “maximum alert” on San Andres as well as Providencia islands to the north and asked hotels to prepare space to shelter the vulnerable population.

Officials on San Andres imposed a curfew for residents at 6am Saturday to limit people in the streets. Air operations to the islands were suspended.

Similar precautions were under way in the central area of Nicaragua’s Caribbean coast, where authorities issued an alert for all types of vessels to seek safe harbour. The hurricane was on a general path to the area of Bluefields and Pearl City.

Nicaraguan soldiers deployed to help evacuate inhabitants of islands and cays around the town of Sandy Bay Sirpi. The army said it delivered humanitarian supplies to Bluefields and Laguna de Perlas for distribution to 118 temporary shelters.

Forecasters said a greater threat than Julia’s winds were rains of 13-25cm (5-10in) – up to 38cm in isolated areas – that the storm was expected to dump across Central America. 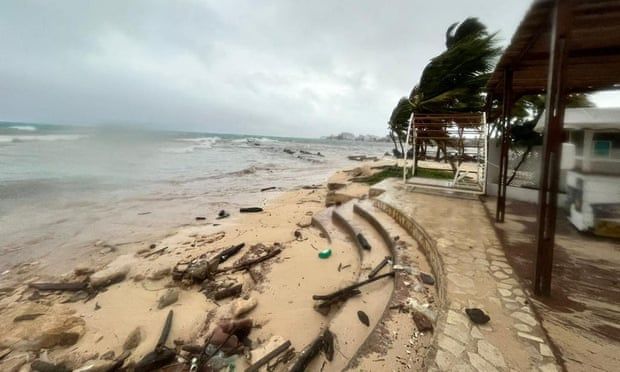 Palm trees are buffeted ahead of Julia’s arrival on San Andres Island, Colombia, on Saturday.

“This rainfall may cause life-threatening flash floods and mudslides through this weekend,” the US National Hurricane Center said.

The storm’s remnants were forecast to sweep across Nicaragua and then skirt by the Pacific coasts of El Salvador and Guatemala, a region already saturated by weeks of heavy rains.

In Guatemala, officials said Julia could drench 10 departments in the east, centre and west of the country, an area that has been most affected by this rainy season and where the poorest people are concentrated.

From May to September, storms caused 49 confirmed deaths and six people were missing. Roads and hundreds of homes have been damaged, Guatemalan officials say.

In El Salvador, where 19 people have died this rainy season, the worst rainfall was expected Monday and Tuesday, said Fernando López, the minister of environment and natural resources.

Officials said they had opened 61 shelters with the capacity to house more than 3,000 people.