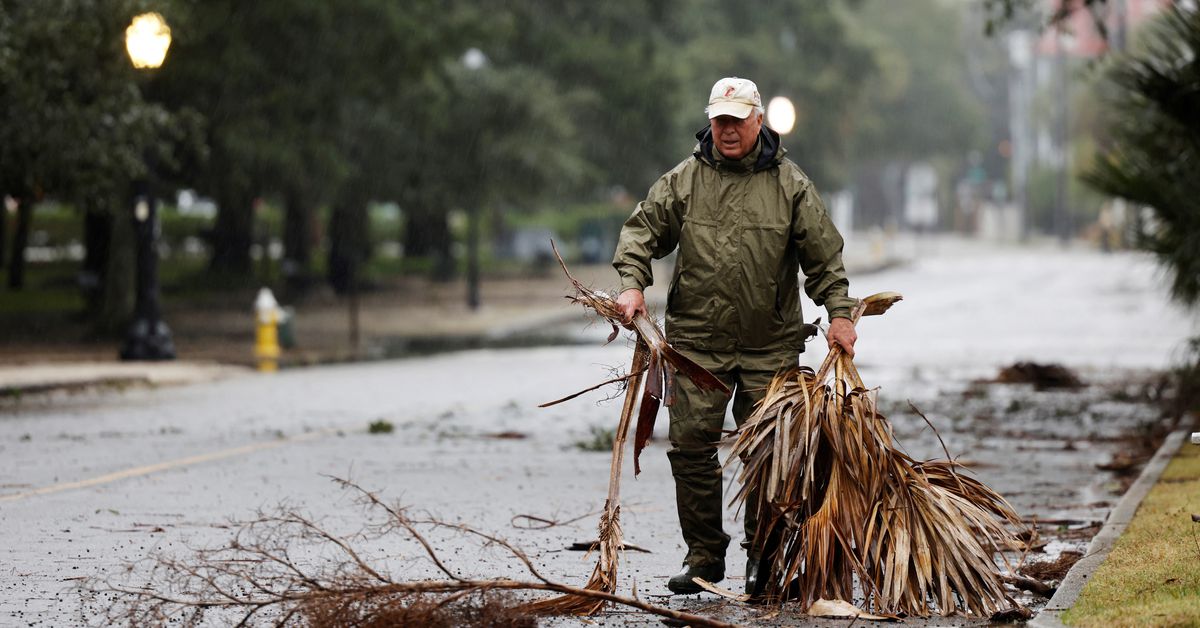 Hurricane Ian slammed into South Carolina on Friday afternoon, making another landfall after a deadly march across Florida that washed away houses, stranded thousands and left an unknown number of people dead.

Roads were flooded with water and encumbered by trees while a number of piers were damaged as the storm left more than 400,000 homes and businesses in the Carolinas without power, according to the tracking website PowerOutage.us.

Ian, now classified as a post-tropical cyclone, will bring heavy rain and potential flash flooding to parts of North and South Carolina, Virginia and West Virginia until at least Saturday morning as it weakens, the NHC said.

The storm struck Florida's Gulf Coast on Wednesday as one of the most powerful storms ever to hit the U.S. mainland and then cut a destructive path across the state, transforming beach towns into disaster areas with catastrophic flooding and winds.

There have been reports of at least 21 deaths in Florida, Kevin Guthrie, director of the state's Division of Emergency Management, said at a morning briefing. He stressed that some of those reports remained unconfirmed.

Georgetown, with a population of about 10,000, is a tourist destination known for its oak-lined streets and more than 50 sites on the National Registry of Historic Places. The town was heavily damaged by 1989's Hurricane Hugo.

Even before Ian's arrival, Charleston was seeing torrential rain. Video clips on social media showed several inches of water in some streets in the port city, which is especially prone to flooding.

A city-commissioned report released in November 2020 found that about 90% of all residential properties were vulnerable to storm surge flooding.

Len Cappe, 68, a retired property manager who moved to Charleston two years ago, said Ian was the first big storm he has encountered.

"It's the wind, it rattles you," Cappe said. "It's blowing furiously."

With the tidal Wando River a block away, Cappe said he was worried about his house and has been glued to his television, watching for updates.

On Pawleys Island, just north of Georgetown, the pier had collapsed into the ocean and town hall was surrounded by water, according to videos and messages posted online by the local police department.

Two days after Ian first hit Florida, the extent of the damage there was becoming more apparent.

Some 10,000 people were unaccounted for, Guthrie said, but many of them were likely in shelters or without power. Roughly 1.6 million Florida homes and businesses remained without power on Friday, according to PowerOutage.us.

"You have homes just washing away," Governor Ron DeSantis said at a briefing on Friday in Lee County, which suffered widespread damage.

President Joe Biden, speaking at the White House, said the hurricane would likely rank among the worst in U.S. history.

"We're just beginning to see the scale of that destruction," he said.

Fort Myers, a city close to where the eye of the storm first came ashore, absorbed a major blow, with numerous houses destroyed. Offshore, Sanibel Island, a popular destination for vacationers and retirees, was cut off when a causeway was rendered impassable.

Hundreds of beleaguered Fort Myers residents lined up at a Home Depot on Friday on the east side of the city, hoping to purchase gas cans, generators, bottled water and other supplies. The line stretched as long as a football field.

Rita Chambers, a 70-year-old retiree who was born in Jamaica and has lived in Fort Myers since 1998, said Ian was unlike any storm she had ever seen.

"And I've been in hurricanes since I was a child!" said Chambers, who moved to New York as a teenager.

She watched as the storm tore the porch off her home in Cape Coral. Despite it all, she is not thinking of leaving Florida.

"I would rather shovel sand from my Florida home than shovel the snow in New York," she said. "If you live in paradise, you have to put up with a hurricane."

At a mobile home park on San Carlos Island in Fort Myers Beach, trailers had been pushed together by the wind and water. A boat, the "Dreamin,'" lay on its side at a local marina, where another boat had come to rest in a tree.

Deborah Grool, 70, lost her home and vehicles to the storm.

"This is devastating, because it's not just homes, it's businesses," said Grool, a real estate agent who has lived on the island for 45 years.

Her daughter, Katy Bonkowski, who joined her mother to examine the damage, had worried about her parents' and sister's decision to stay on the island during the storm.