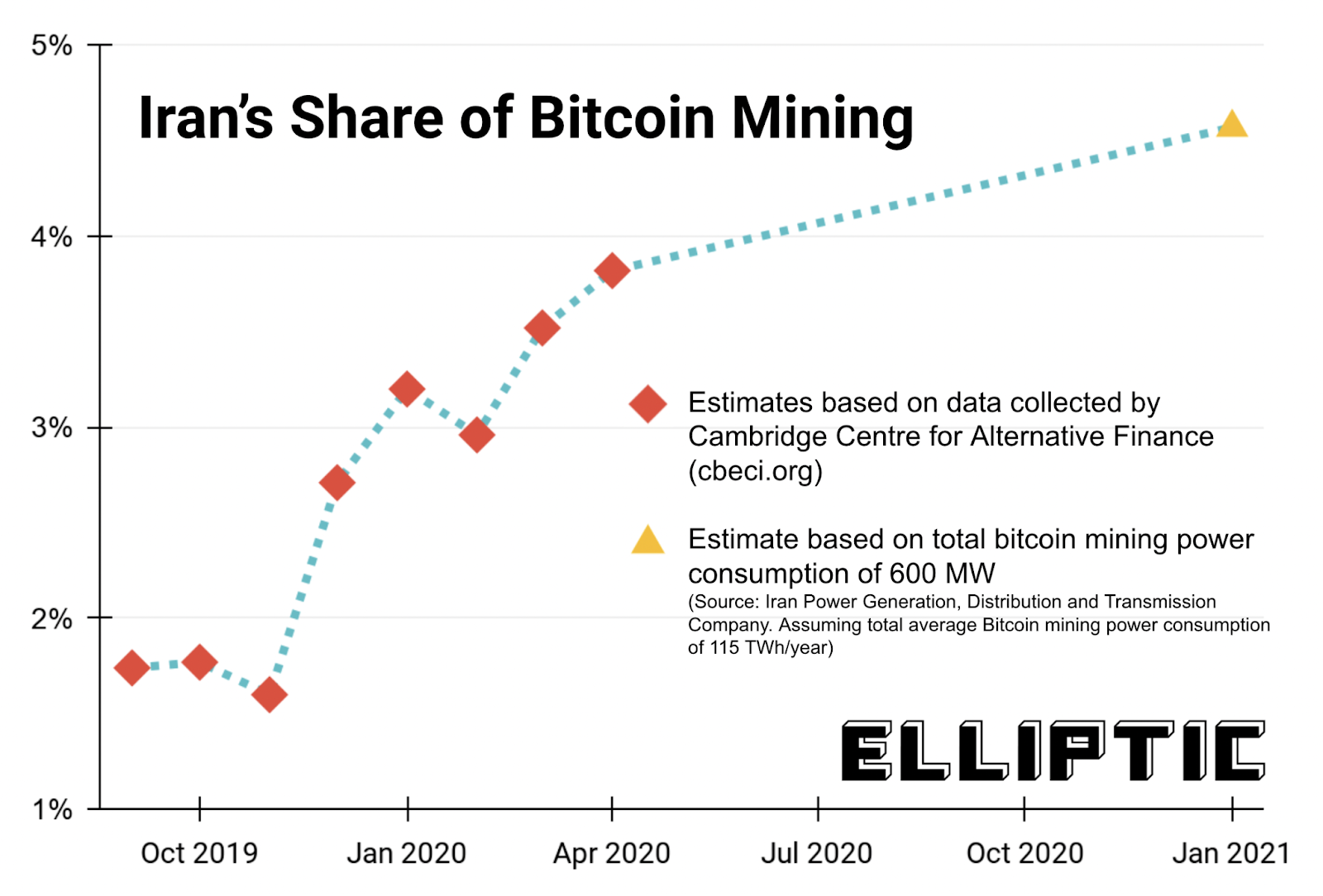 Elliptic.co estimates that 4.5% of all Bitcoin mining takes place in Iran, allowing the country to circumvent trade embargoes and earn hundreds of millions of dollars in cryptoassets that can be used to purchase imports and bypass sanctions. This has implications for financial institutions engaging in cryptoasset transactions - who should ensure they have appropriate controls in place to avoid sanctions violations.

The US imposes an almost total economic embargo on Iran, including a ban on all Iranian imports and sanctions on Iranian financial institutions. Oil exports have plummeted 70% over the past decade, leaving the country in a deep recession with soaring unemployment and periods of civil unrest.

In the face of these sanctions, Iran has turned to an unlikely solution - Bitcoin mining.

Bitcoin and other cryptoasset networks run on electricity, and quite a lot of it. Bitcoin miners run power-hungry computers, which process new transactions and add them to the blockchain. In return, the miners are rewarded with bitcoins - both from transaction fees as well as the minting of new bitcoins. The mining process effectively converts energy into cryptocurrency.

Iran has recognised that Bitcoin mining represents an attractive opportunity for a sanctions-hit economy suffering from a shortage of hard cash, but with a surplus of oil and natural gas.

In 2019 Iran officially recognised cryptoasset mining, later establishing a licensing regime that required miners to identify themselves, pay a higher (but still very low) tariff for electricity, and to sell their mined bitcoins to Iran’s central bank. Thousands of unlicensed mining farms have subsequently been identified and shut down - including in mosques, which receive free electricity.

The prospect of cheap power for Bitcoin mining has attracted significant inward investment, particularly from China, a leader in the industry. Several Chinese businesses have been granted mining licenses and have established operations in the country. These companies have described establishing good relationships with “the army in Iran”, and one particularly large facility in the Rafsanjan Special Economic Zone was reportedly built in collaboration with a “military organization”.

How Much Bitcoin Mining Takes Place in Iran?

What is the scale of Iranian Bitcoin mining? Exact figures are very challenging to determine, but Elliptic estimates that Iran-based miners account for approximately 4.5% of all Bitcoin mining. This is based on data collected from miners by the Cambridge Centre for Alternative Finance up to April 2020, and statements from Iran’s state-controlled power generation company in January of this year that up to 600 MW of electricity was being consumed by miners. This level of Bitcoin mining would currently bring in annualised revenues of close to $1 billion.

The electricity being used by miners in Iran would require the equivalent of approximately 10 million barrels of crude oil each year to generate - around 4% of total Iranian oil exports in 2020.

The Iranian state is therefore effectively selling its energy reserves on the global markets, using the Bitcoin mining process to bypass trade embargoes. Iran-based miners are paid directly in Bitcoin, which can then be used to pay for imports - allowing sanctions on payments through Iranian financial institutions to be circumvented.

This has become all but an official policy, with a think tank attached to the Iranian president’s office recently publishing a report highlighting the use of cryptoassets to avoid sanctions.

Many of those making the Bitcoin transactions and paying the fees to Iran-based miners will be located in the United States - the very country spearheading the sanctions. As the US government considers whether to lift some sanctions on Iran in exchange for a return to a nuclear deal, it will need to consider the role that Bitcoin mining plays in enabling Iran to monetise its natural resources and access financial services such as payments.

In the meantime, financial institutions should consider the sanctions risk they are exposed to due to Iranian Bitcoin mining - particularly those that are beginning to offer cryptoasset services. If 4.5% of Bitcoin mining is based in Iran, then there is a 4.5% chance that any Bitcoin transaction will involve the sender paying a transaction fee to a Bitcoin miner in Iran. Financial institutions should also be on the lookout for crypto deposits originating from Iranian miners that are seeking to cash-out their earnings.

However as we discuss in more detail our new sanctions guide, solutions to these challenges exist and are already used by financial institutions engaging in cryptoasset activity.

For example, blockchain analytics solutions such as those provided by Elliptic can be used by regulated financial institutions to detect and block cryptoasset deposits from Iran-based entities including miners. Techniques can also be employed to ensure that transaction fees are not paid to miners in high risk jurisdictions.


To learn more, download Elliptic new guide to sanctions compliance in cryptoassets. Understand the sanctions risks posed by cryptoassets, and the tools and techniques that can be used to overcome them and operate a compliant cryptoasset service.
Add Comment