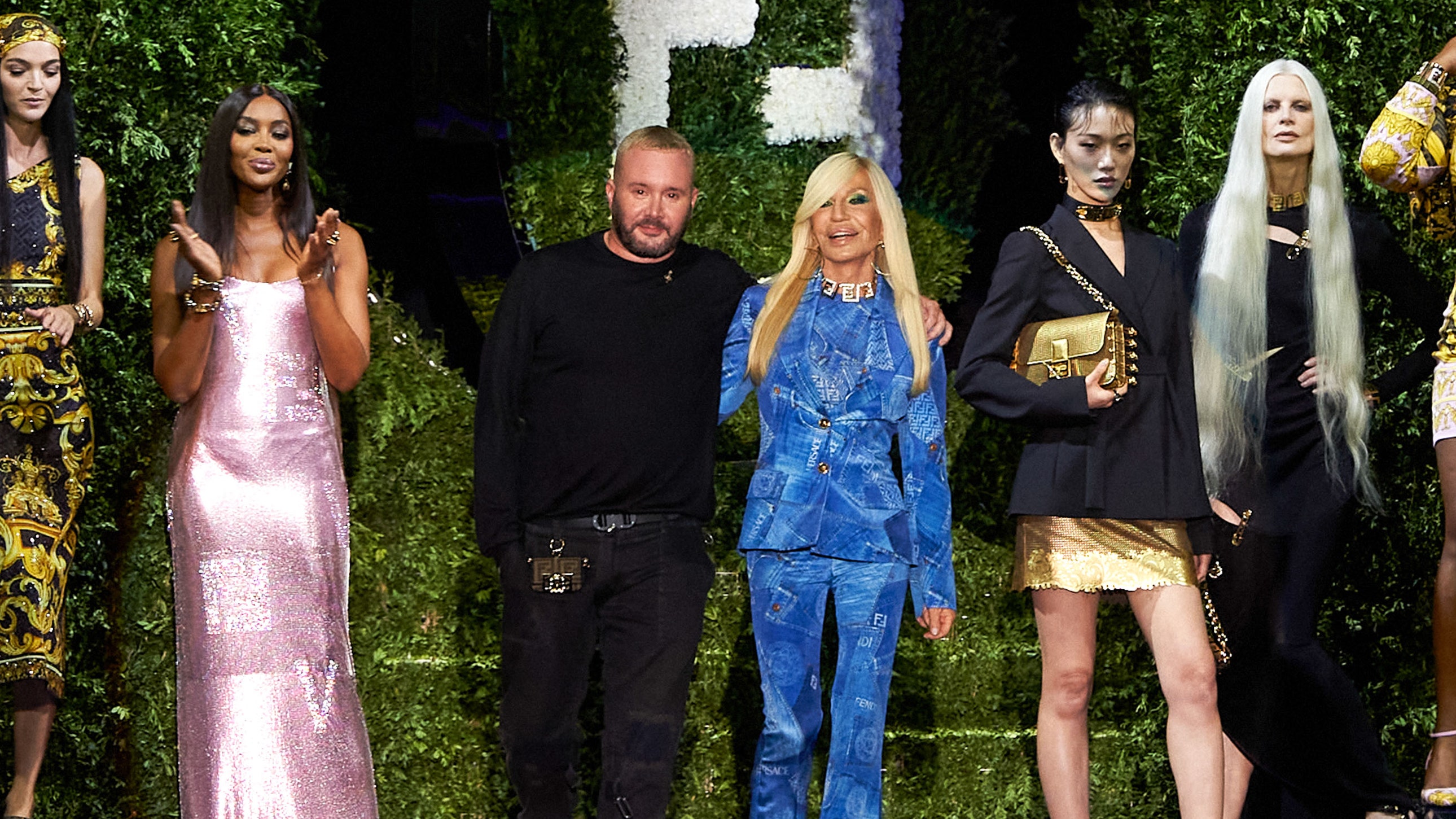 How Do You Say Fendace? Kate Moss, Naomi Campbell, and More Step Out in Versace and Fendi’s Runway Collaboration

Donatella Versace and Kim Jones and Silvia Fenturini of Fendi join forces for an unprecedented collaboration they're calling Fendace.

Many extraordinary shows have happened in the courtyard of the Versace family palazzo on Via Gesu, but tonight’s was something entirely new-and in fashion, that’s very extraordinary indeed. What went down is that Kim Jones and Silvia Venturini Fendi of Fendi and Donatella Versace of Versace swapped houses-apparently for one night only-to design 25 looks for their erstwhile rivals. The result was a fabulous fashion Frankenstein christened Fendace, and it was modeled by a cast you suspect will go down as by far this season’s most spectacular.

And yet as mind-blowing as the casting was-and it was-arguably the most thrillingly unprecedented moment of all happened shortly after Kate Moss and Amber Valletta had walked together and Kim Jones had popped out to take a bow for his part in designing the first 25 looks. Suddenly the Medusa faced panels embedded in the foliage walls of the fashion space rotated to reveal the double-F logo designed by Karl Lagerfeld for Fendi. In this citadel of Versaciness, that felt almost shockingly radical.

In the love-crush backstage afterwards the audience that included Elizabeth Hurley, her son Damian, and Dua Lipa collided with the cast. The vibe was, as Amanda Harlech so aptly put it, “hallucinatory.” Had we really just seen Donatella Versace take a bow for designing a Fendi collection-ok, Fendace-that closed with Naomi Campbell? Was that really Moss dancing with Shalom Harlow for the final lineup alongside Karen Elson, Kristen McMenamy, and contemporary up-and-comers including Gigi Hadid, Adut Akech, Emily Ratajkowski, Vittoria Ceretti, and, oh yes, young Lila Moss Hack?

In the thick of that crush was Kim Jones, who explained how the Fendace Frankenstein was first formulated. “In February after the ready-to-wear show we came to dinner here with Donatella. Silvia and Donatella got on really well, and we thought it would be nice to have some fun. It was a design-off: we designed Versace and she designed Fendi. Remember these two houses are not in the same group: we’ve just done it as friends, and out of respect for each other. It’s never been planned as a commercial thing.”

Having the chance to get his hands on the Versace archive, he added: “was mind-blowing. There are things I’d never had the chance to see with my own eyes. And when Donatella went to the Fendi archive she picked out things from the same period we were looking at, by chance. Also Donatella has never designed for another brand, and neither has Silvia so it was very interesting to see. But the reasons behind it were straightforward: we wanted to do something that was optimistic and fun as we return to live shows. And we wanted to do it because we love each other.”

As Jones was hinting, the most notable recent comparable fashion ‘contamination,’ between Balenciaga and Gucci, was indeed a project comprising two parts of a greater corporate whole. The most committed contaminator in fashion, meanwhile, is probably Moncler through its Genius project: however in this it acts more as curator more than co-creator. This was something both more radical and more daringly democratic: a meeting of three disparate design minds, all at the highest echelons of fashion, and all acting with an in-this-business all-too-rare creative humility in allowing one another free rein to reinterpret each other’s IP. It also had a heritage house logic to it, in that Gianni Versace and Karl Lagerfeld were both extremely friendly rivals. What remained unclear as the post-show party that promised to be an all-nighter began is whether this Fendace capsule is a one-off-or whether there might be a return round, maybe hosted by Fendi, next season. Tonight would be hard to top. 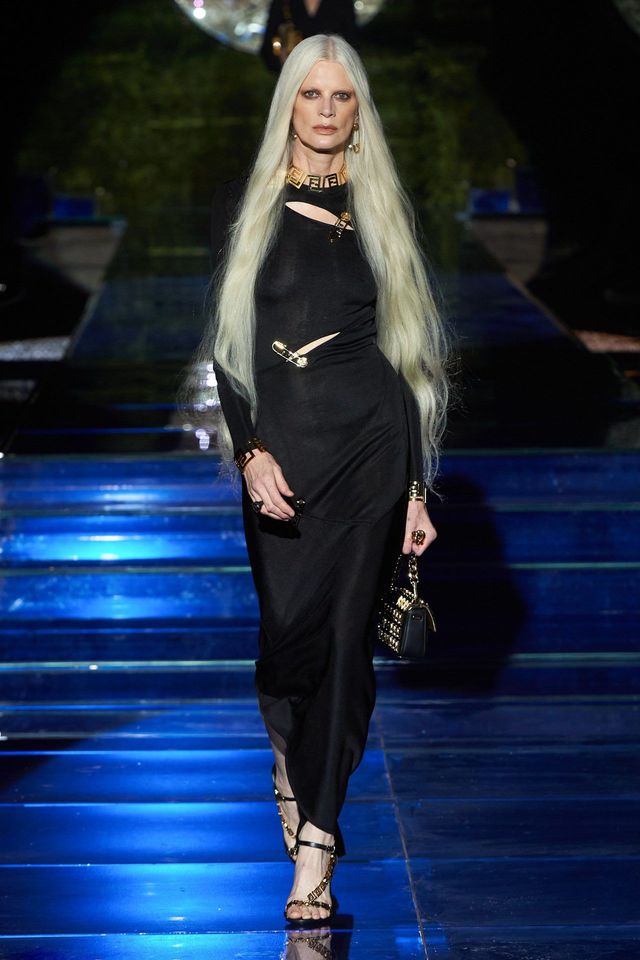 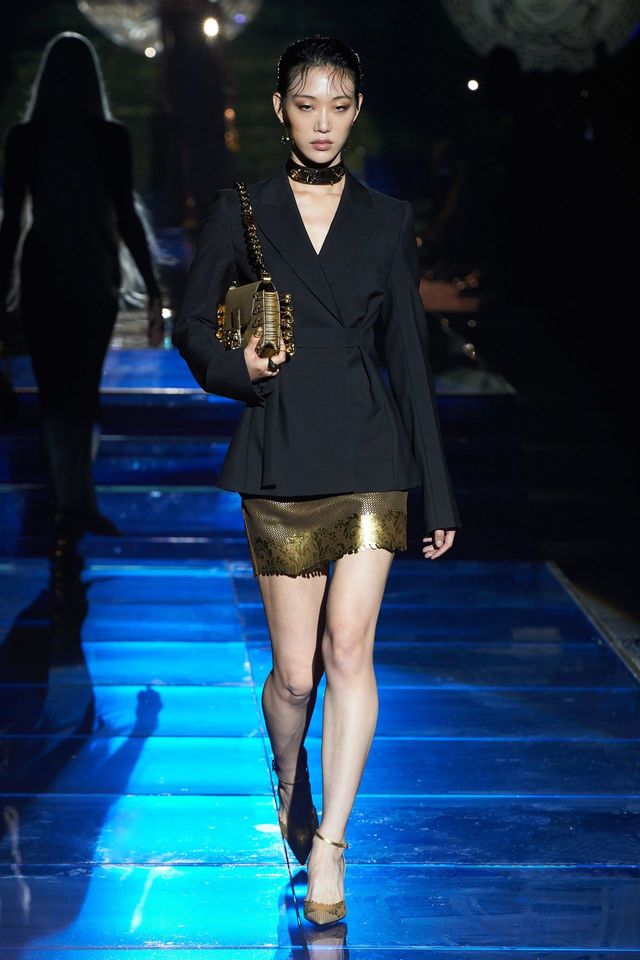 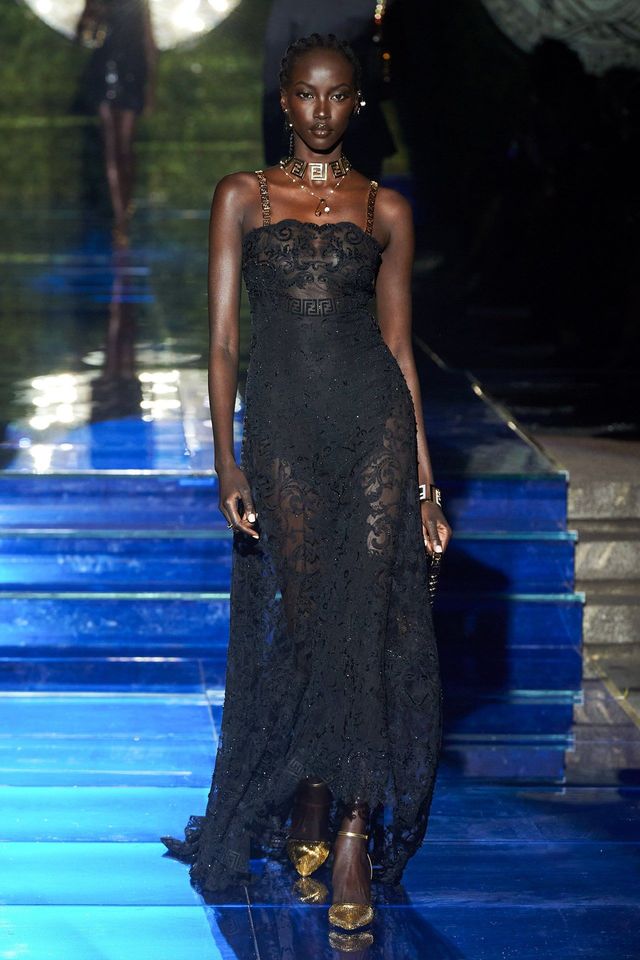 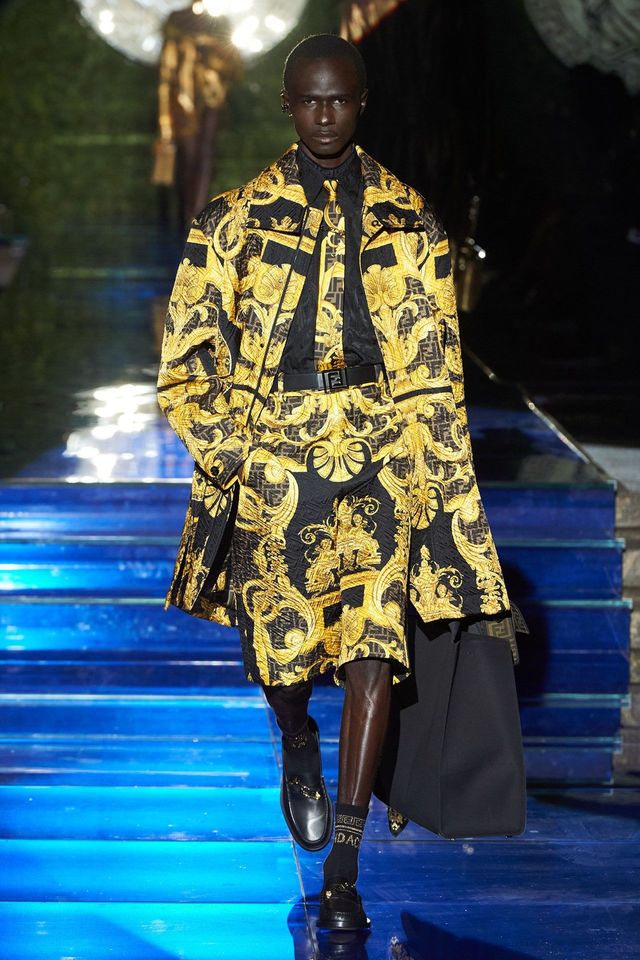 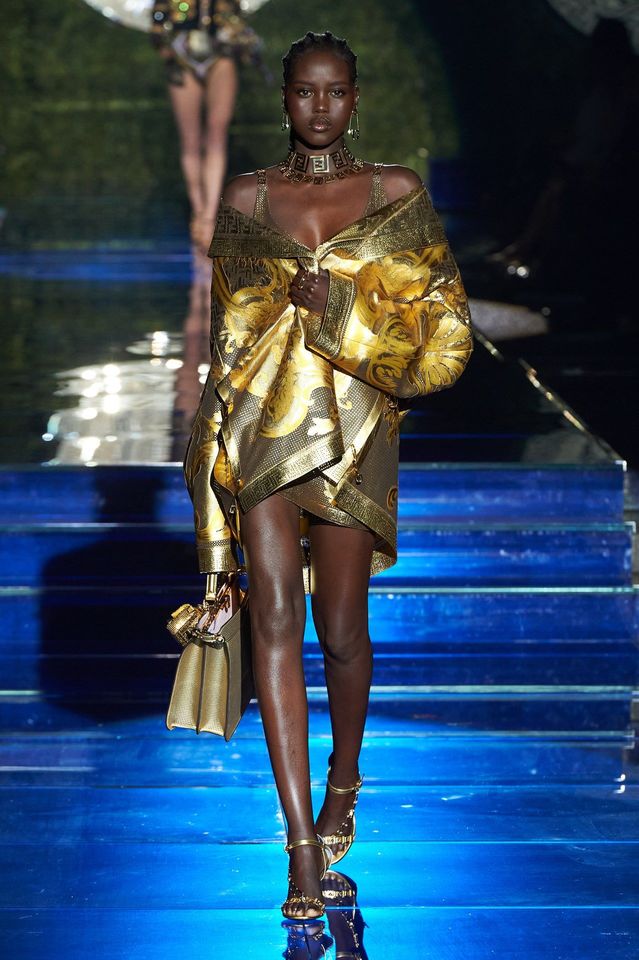 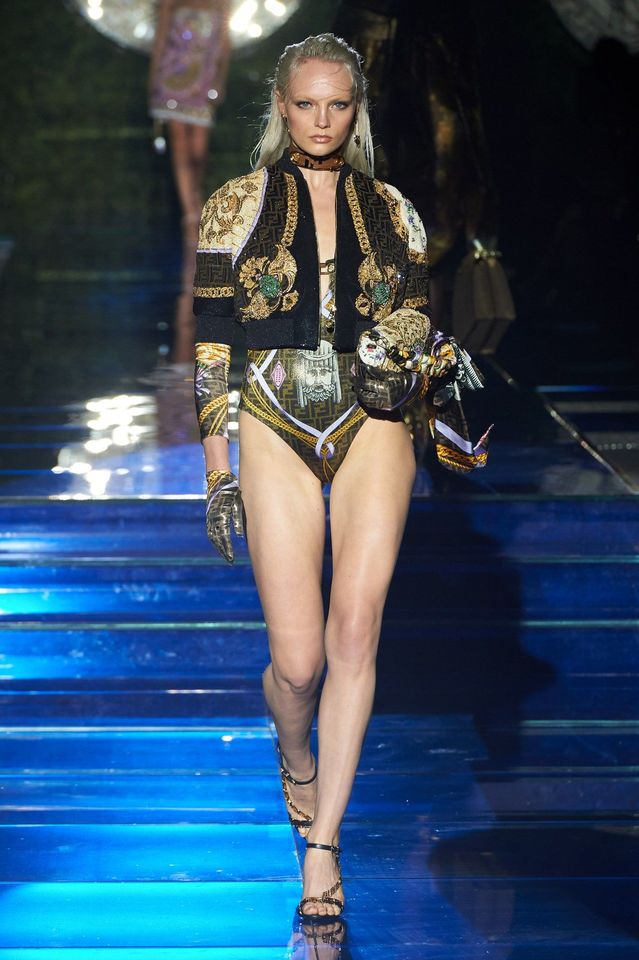 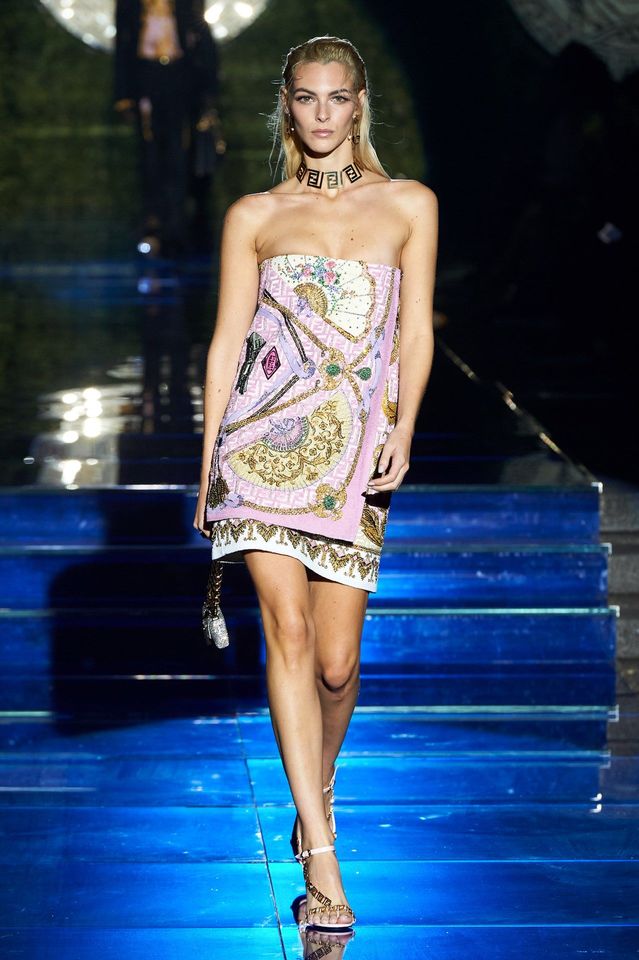 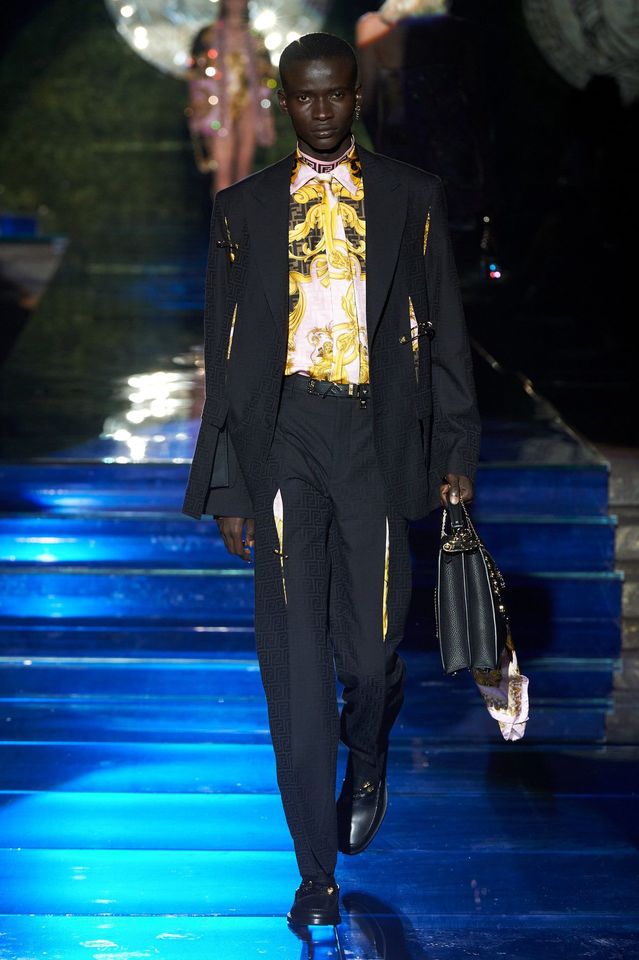 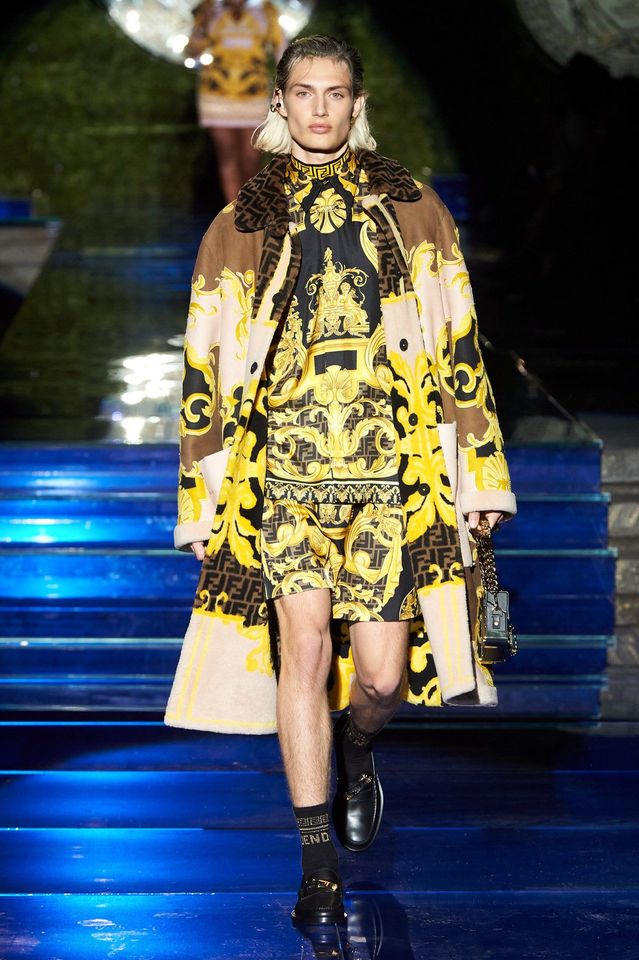 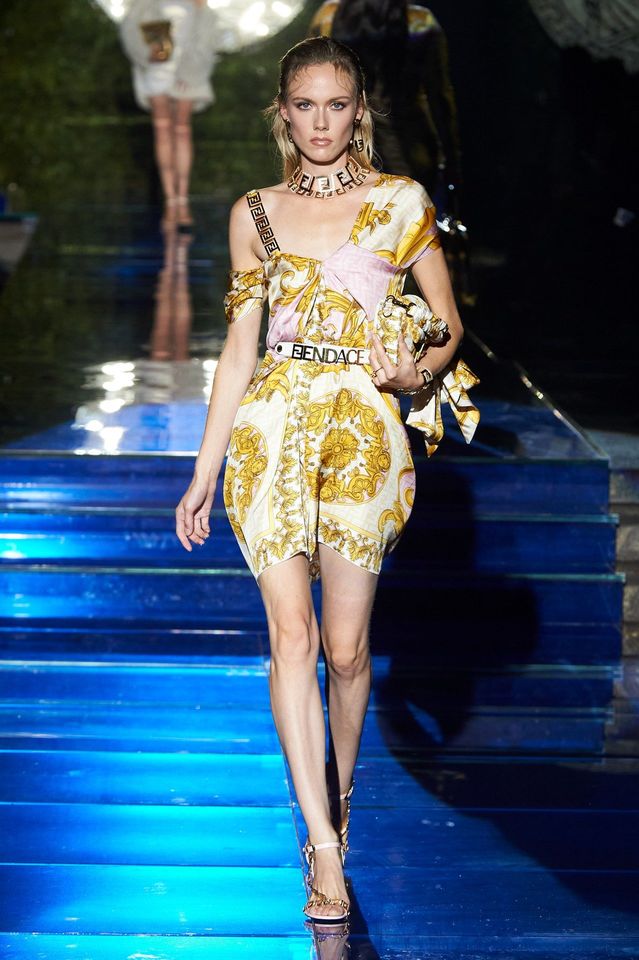 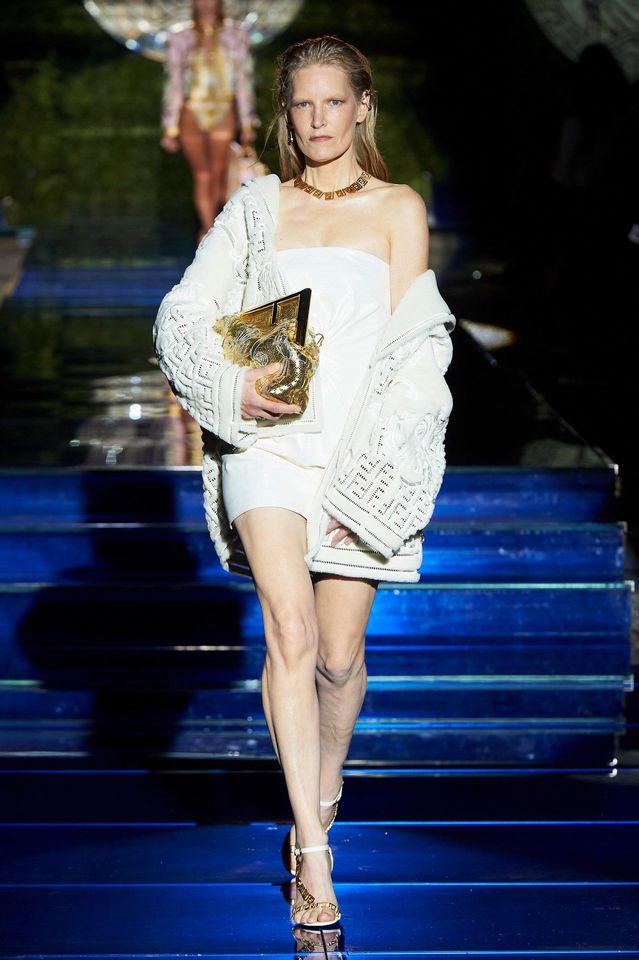 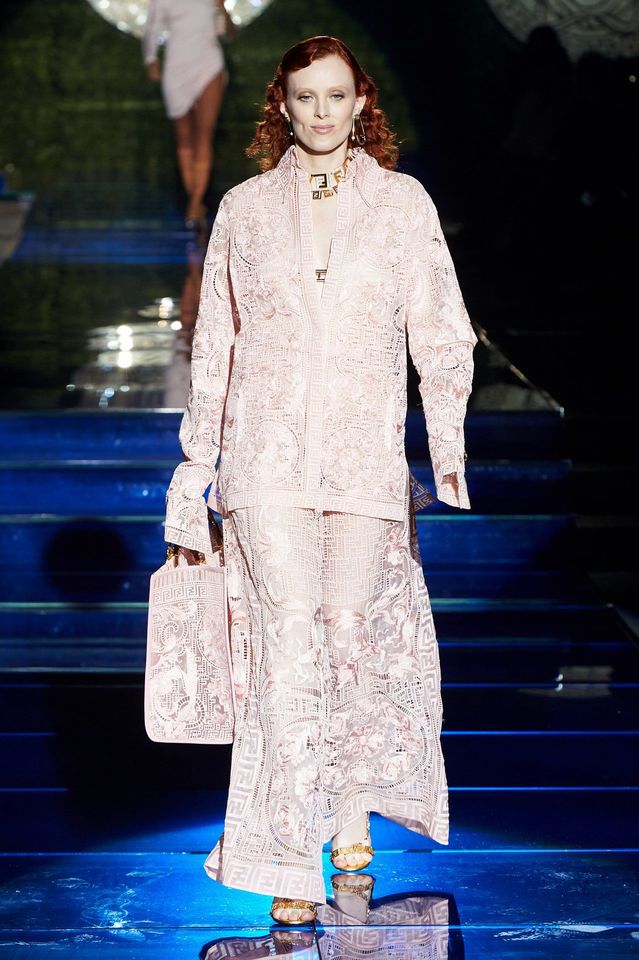 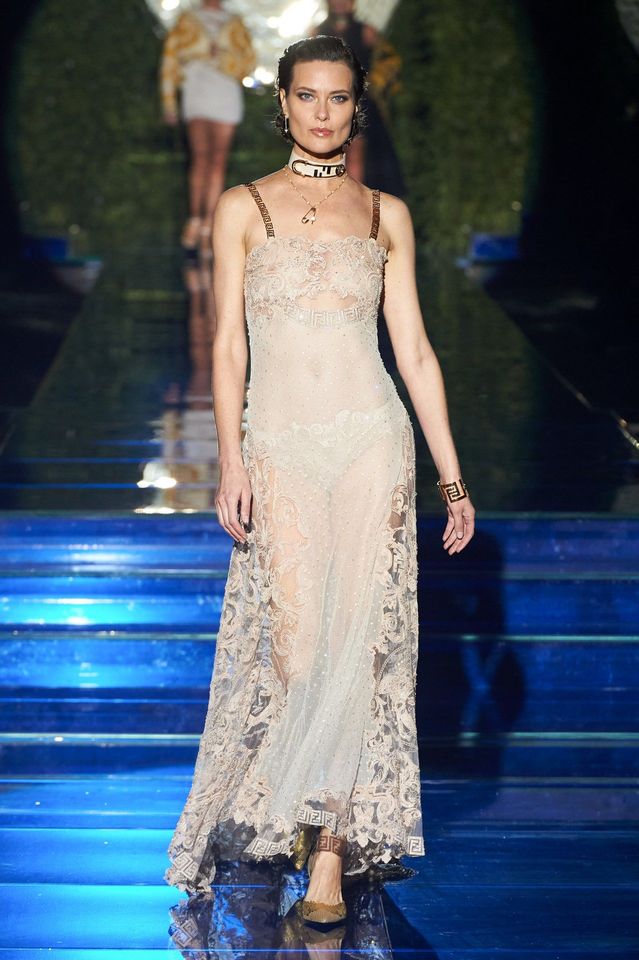 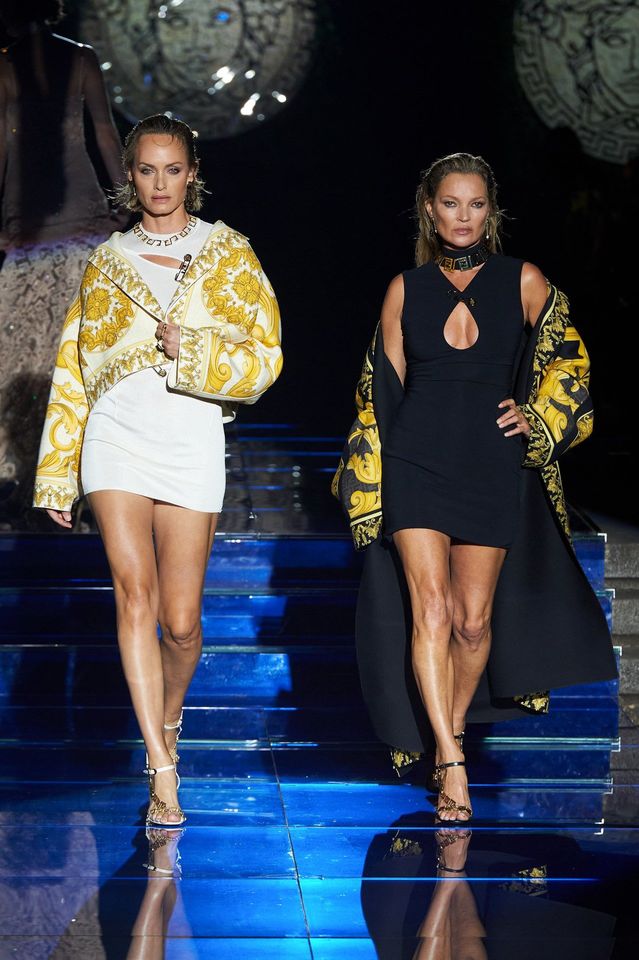