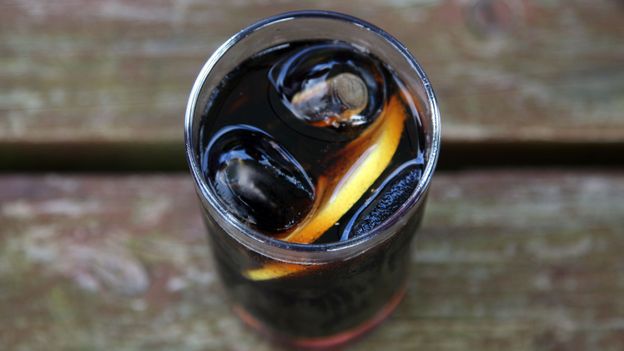 How children are spoofing Covid-19 tests with soft drinks

Some children have found a devious method to get out of school – using cola to create false positive Covid tests. How does it work?

Children are always going to find cunning ways to bunk off school, and the latest trick is to fake a positive Covid-19 lateral flow test (LFT) using soft drinks. [Videos of the trick have been circulating on TikTok since December and a school in Liverpool, UK, recently wrote to parents to warn them about it.] So how are fruit juices, cola and devious kids fooling the tests, and is there a way to tell a fake positive result from a real one? I’ve tried to find out.

First, I thought it best to check the claims, so I cracked open bottles of cola and orange juice, then deposited a few drops directly onto LFTs. Sure enough, a few minutes later, two lines appeared on each test, supposedly indicating the presence of the virus that causes Covid-19.

It’s worth understanding how the tests work. If you open up an LFT device, you’ll find a strip of paper-like material, called nitrocellulose, and a small red pad, hidden under the plastic casing below the T-line. Absorbed on the red pad are antibodies that bind to the Covid-19 virus. They are also attached to gold nanoparticles (tiny particles of gold actually appear red), which allow us to see where the antibodies are on the device. When you do a test, you mix your sample with a liquid buffer solution, ensuring the sample stays at an optimum pH, before dripping it on the strip.

The fluid wicks up the nitrocellulose strip and picks up the gold and antibodies. The latter also bind to the virus, if present. Further up the strip, next to the T (for test), are more antibodies that bind the virus. But these antibodies are not free to move – they are stuck to the nitrocellulose. As the red smear of gold-labelled antibodies pass this second set of antibodies, these also grab hold of the virus. The virus is then bound to both sets of antibodies – leaving everything, including the gold, immobilised on a line next to the T on the device, indicating a positive test.

Gold antibodies that haven’t bound to the virus carry on up the strip where they meet a third set of antibodies, not designed to pick up Covid-19, stuck at the C (for control) line. These trap the remaining gold particles, without having to do so via the virus. This final line is used to indicate the test has worked. 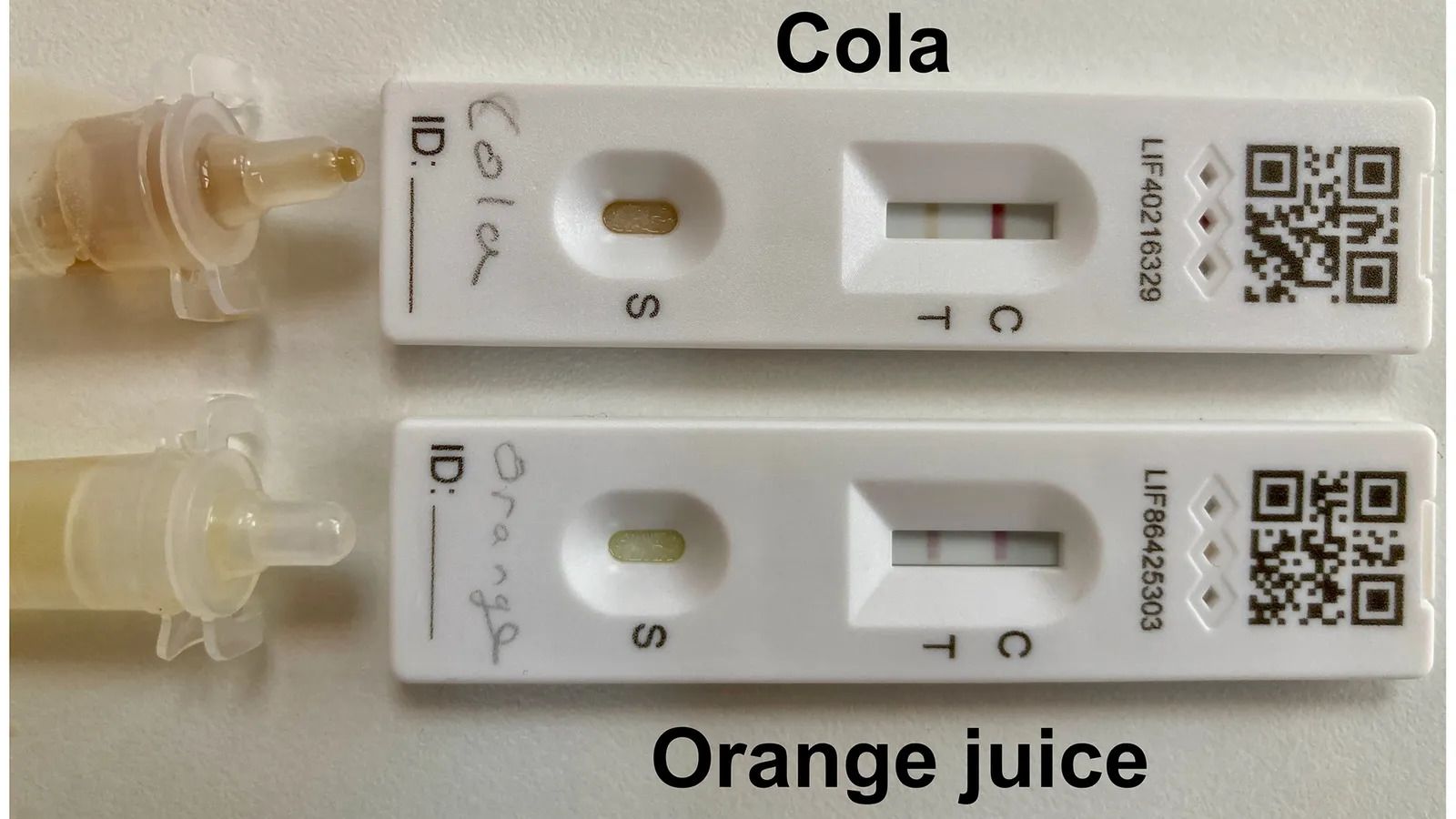 So, how can a soft drink cause the appearance of a red T line? One possibility is that the drinks contain something that the antibodies recognise and bind to, just as they do to the virus. But this is rather unlikely. The reason antibodies are used in tests like these is that they are incredibly fussy about what they bind to. There’s all sorts of stuff in the snot and saliva collected by the swabs you take from the nose and mouth, and the antibodies totally ignore this mess of protein, other viruses and remains of your breakfast. So they aren’t going to react to the ingredients of a soft drink.

A much more likely explanation is that something in the drinks is affecting the function of the antibodies. A range of fluids, from fruit juice to cola, have been used to fool the tests, but they all have one thing in common – they are highly acidic. The citric acid in orange juice, phosphoric acid in cola and malic acid in apple juice give these beverages a pH between 2.5 and 4. These are pretty harsh conditions for antibodies, which have evolved to work largely within the bloodstream, with its almost neutral pH of about 7.4.

Maintaining an ideal pH for the antibodies is key to the correct function of the test, and that’s the job of the liquid buffer solution that you mix your sample with, provided with the test. The critical role of the buffer is highlighted by the fact that if you mix cola with the buffer – as shown in this debunking of an Australian politician’s claim that mass testing is worthless – then the LFTs behave exactly as you’d expect: negative for Covid-19.

So without the buffer, the antibodies in the test are fully exposed to the acidic pH of the beverages. And this has a dramatic effect on their structure and function. Antibodies are proteins, which are comprised of amino acid building blocks, attached together to form long, linear chains. These chains fold up into very specific structures. Even a small change to the chains can dramatically impact a protein’s function. These structures are maintained by a network of many thousands of interactions between the various parts of the protein. For example, negatively charged parts of a protein will be attracted to positively charged areas. 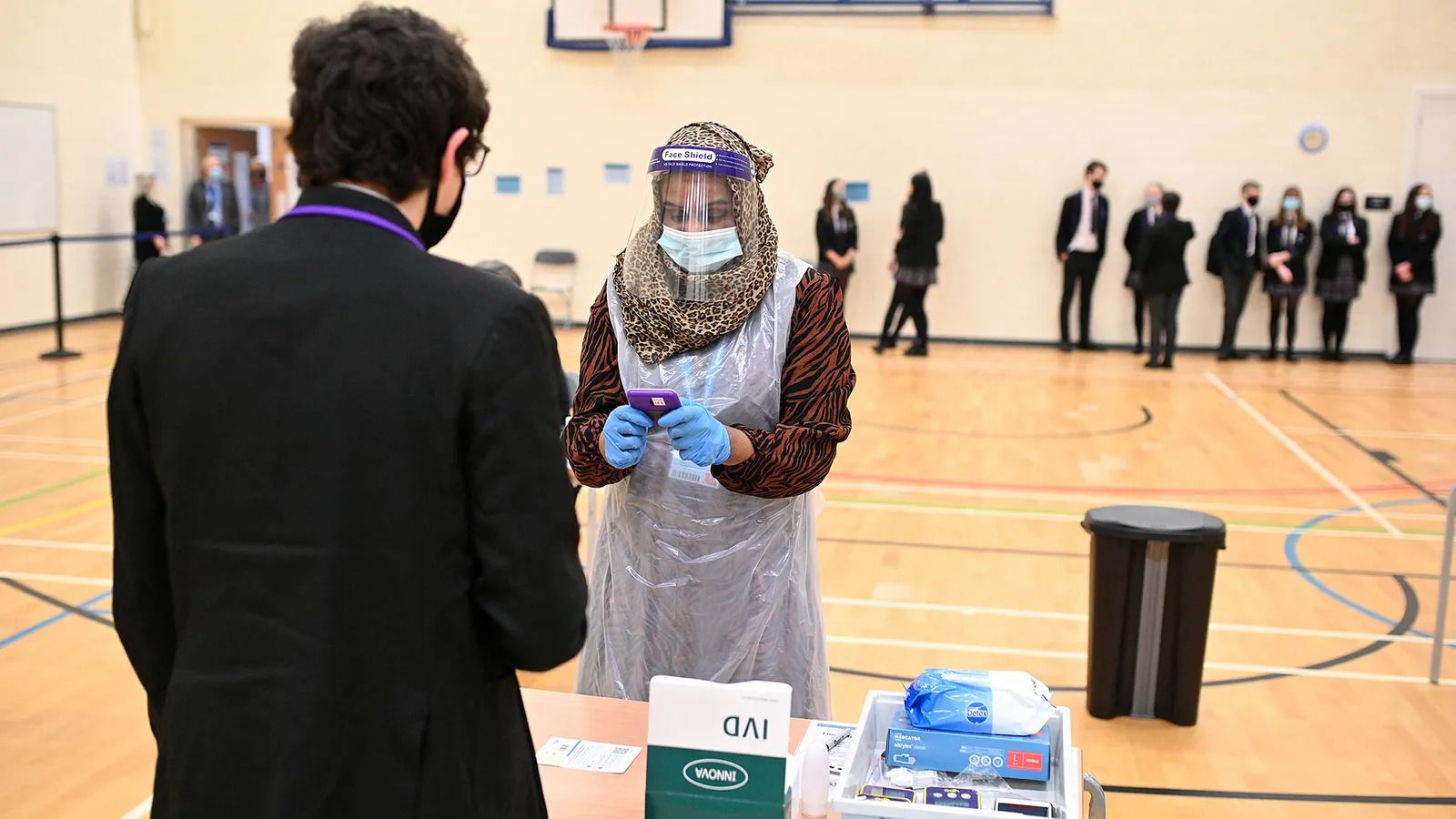 But in acidic conditions, the protein becomes increasingly positively charged. As a result, many of the interactions that hold the protein together are disrupted, the delicate structure of the protein is affected and it no longer functions correctly. In this case, the antibodies’ sensitivity to the virus is lost.

Given this, you might expect that the acidic drinks would result in completely blank tests. But denatured proteins are sticky beasts. All of those perfectly evolved interactions that would normally hold the protein together are now orphaned and looking for something to bind to. A likely explanation is that the immobilised antibodies at the T-line stick directly to the gold particles as they pass by, producing the notorious cola-induced false positive result.

Is there then a way to spot a fake positive test? The antibodies (like most proteins) are capable of refolding and regaining their function when they are returned to more favourable conditions. So I tried washing a test that had been dripped with cola with buffer solution, and sure enough the immobilised antibodies at the T-line regained normal function and released the gold particles, revealing the true negative result on the test.

Children, I applaud your ingenuity, but now that I’ve found a way to uncover your trickery I suggest you use your cunning to devise a set of experiments and test my hypothesis. Then we can publish your results in a peer-reviewed journal.