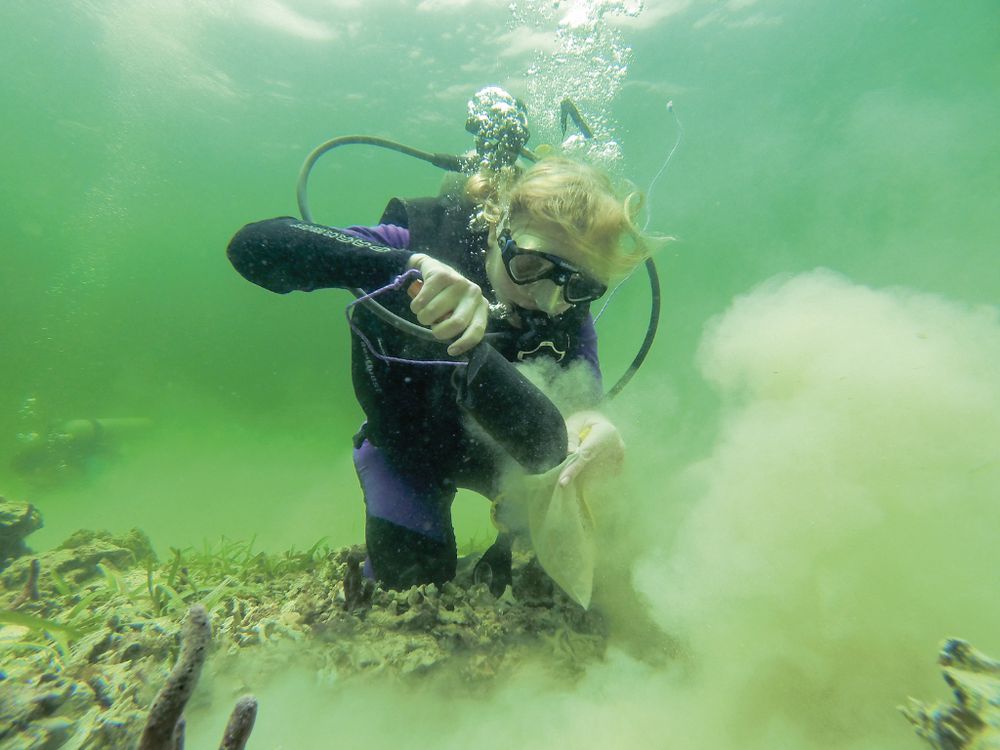 How can 'shark dander' contribute to the conservation of coral reefs?

The scales or denticles that sharks shed settle to the ocean floor as sediment and can be used to understand which sharks lived on a reef in the past.

Based on microscopic shark scales found in fossil and modern coral reefs in the Caribbean of Panama, Smithsonian scientists reveal the changing roles of sharks during the past 7,000 years, both before and after hunting sharks in this area. region. They hope that this new use of dermal denticles will provide a context for innovative reef conservation strategies.

The microscopic scales that cover a shark's body (dermal denticles) reduce drag when sharks swim and protect them from abrasion with hard substrates and ectoparasites.

Erin Dillon, who began this study as an intern at the Smithsonian Tropical Research Institute (STRI) and is now completing her doctoral work at the University of California, Santa Barbara, explains that “denticles are the reason why the skin of sharks is rough like sandpaper if rubbed in one direction and smooth in another. Sharks are essentially covered in millions of tiny teeth. "

Just as humans shed dry skin and dander, sharks lose their denticles, which then accumulate in marine sediment. The oldest denticles found so far, at Harding Sandstone in Colorado, are about 455 million years old.

STRI paleobiologist Aaron O'Dea gathers clues from modern and fossil coral reefs to reconstruct baseline conditions before human colonization and to understand how ecological and evolutionary processes change over time.

"Placoderms in the Paleozoic, and then marine reptiles in the Mesozoic, were bigger and ate sharks," O'Dea explains. “Placoderms ruled the oceans for about 70 million years and Mesozoic marine reptiles ruled for more than 100 million years. Sharks are only the top predators now because extinction events preferentially wiped out other groups, but allowed sharks to survive. Sharks seem to have remarkable evolutionary resilience and I was fascinated to work on a technique that would help us explore how they have fared more recently when humans enter the scene. "

His team sampled material from a 7,000-year-old fossilized reef in Bocas del Toro, Panama and from nearby modern Caribbean reefs. O'Dea asked Erin Dillon if she could find shark teeth in the samples.

"What started as a three-month internship turned into a two-year stay in Panama and then expanded into part of my doctoral thesis," said Dillon. "I have grown with this project as my role went from exploring and processing the samples as an intern to leading the project, analyzing and interpreting the data, and leading the writing."

For each week of collecting samples of modern coral debris and fossil reefs, it took about a year of laboratory work to recover and identify the denticles. In total, Dillon and his colleagues had to sift through about 300 kilograms of reef sediment, enough to fill two bathtubs, to find the denticles they needed to find out how many and what kinds of sharks were in Bocas del Toro in the past. First, they used acetic acid to dissolve the calcareous sediments, and then they sorted the residue under a microscope using a brush to isolate the denticles.

"Finding the first denticles was exciting," exclaimed Dillon. "They were beautifully preserved and abundant enough to provide information on ancient shark communities."

But before using these fossils to uncover shark communities of the past, Dillon wanted to better understand the relationship between shark numbers and denticle abundance, how denticles fossilize in reef sediments, and which sharks have what types of denticles. . After publishing these studies, he was finally able to return to the fossil record.

He found that denticle build-up rates, and thus the abundance of sharks, were more than three times higher before humans began to use the region's marine resources. All types of denticles declined over time, but those found in commercially fished species declined the most. Older samples contained a higher proportion of denticles from fast-swimming pelagic sharks, such as hammerhead sharks and carcarrínids (dogfish, blue shark, etc.). In contrast, Dillon found that nurse shark denticles are relatively more common today than in the past.

To supplement this evidence from the fossil record, Dillon reviewed archaeological studies and historical accounts to better understand the forces that could have caused these declines. It found that the steepest decline in shark abundance occurred in the late 20th century according to these historical records. This moment coincided with the development of a shark fishery in Panama, which selectively targeted pelagic sharks. However, declining denticles belonging to nurse sharks, which are infrequently caught both today and historically, suggested that indirect factors such as loss of coral reef habitat or prey were also to blame.

"When the Spanish came to America, they wrote fantastic tales of shark-ridden seas," said Dillon. “But these days we see very few sharks: we are lucky to see the odd nurse shark. Our data show that sharks in Bocas del Toro have been depleted both by long-term capture, which accelerated in the second half of the 20th century, and by habitat degradation, which began even earlier with the expansion of cultivation. banana and coastal development. Nowadays there is so much land runoff coming from the coast that, in some places, it is like swimming through lama ”.

"Taken together, Erin's work shows that collecting denticles can be used carefully to help rebuild shark communities of the past through time," O'Dea said. “Sharks are an integral part of the health of the oceans and play an important role in the great diversity and functioning of coral reefs. Having empirical estimates of past shark abundance and community composition helps us frame our understanding of what is natural in the seas. "

"We hope to extend this method elsewhere to examine broader geographic patterns of change in reef shark communities over extended ecological time scales," Dillon commented. “For example, we are currently reconstructing trends in denticle accumulation along the Pacific coast of Panama over the past thousands of years using sediment cores. These baseline data will help us explore the causes and consequences of changes in the abundance and functional diversity of sharks. Our work can also help tailor shark management objectives to this region.”
Add Comment