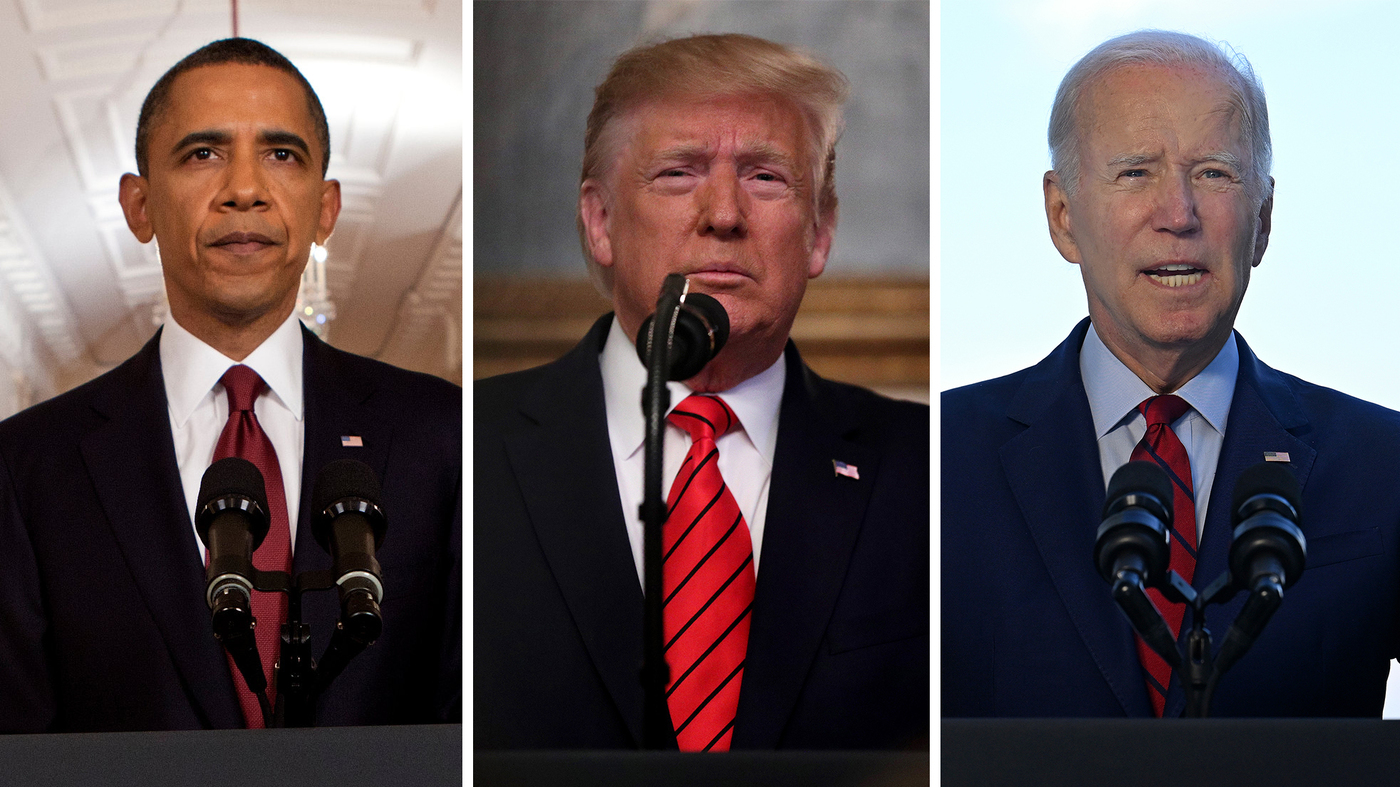 The words each president uttered and their mannerisms at the podium reveal a lot about the type of leaders former Presidents Barack Obama and Donald Trump attempted to be and in the case of President Joe Biden, attempt to be.

This week, Biden announced that the U.S. had killed al-Qaida leader Ayman al-Zawahiri in Kabul over the weekend.

In 2019, Trump revealed that the U.S. killed ISIS leader Abu Bakr al-Baghdadi. And in 2011, Obama shared with the American people that Osama bin Laden, the architect of the 9/11 terrorist attacks on the U.S., was killed.

In the days following Biden's announcement, edited videos have popped up online comparing the speeches by Biden, Obama and Trump. Though some of the videos are created to put certain leaders in a bad light, analyzing these three speeches is worthwhile, according to historians and rhetoric experts that spoke to NPR.

Taking a deeper look at each speech, their delivery, even down to the words each used, provides a small window into each man, those experts said.

Though starkly different characters, there are similarities worth noting, said Thomas Schwartz, a professor of history, political science and European studies at Vanderbilt University.

The fact that Obama, Trump and Biden took center stage to announce the execution of another person is "a little bloodthirsty," Schwartz said.

"But they do recognize that there's a domestic political gain from taking out terrorist leaders, and they want to claim it," he added.

Each president in their speech makes special note to say that they directed the military and intelligence officers to act on the intel provided, that they gave the orders, Schwartz said. Each man ultimately wants to assert his leadership on the global stage, he said.

"Underneath it all are presidents trying to justify themselves politically and gain something politically," Schwartz said. "So I think our comparison on that level is probably justified even if, on stylistic things, it also reminds people what they liked and didn't like about various presidents." 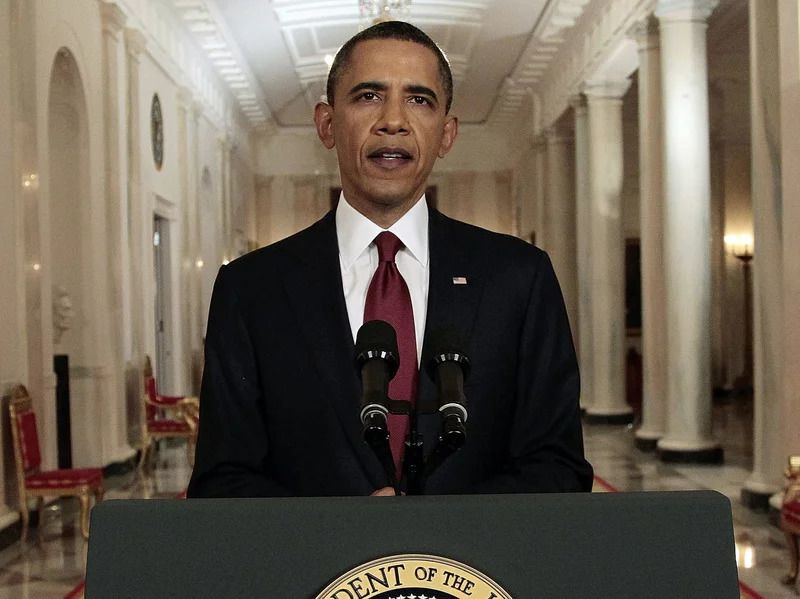 President Barack Obama reads his statement to photographers after making a televised statement on the death of Osama bin Laden from the East Room of the White House on May 1, 2011.

Each expert that spoke to NPR agreed: Obama's speech was iconic. Though Trump and Biden took out major terrorist leaders, the gravity of killing bin Laden is unmatched. To some degree, Trump and Biden attempted to even emulate Obama's bin Laden speech, Schwartz said.

"Bin Laden was, of course, someone who was a household name in a way that the other two men were not," said Margaret O'Mara, a history professor at the University of Washington. "So it was sort of an extraordinary historic moment, and something that in a way looms larger than the other two, because it was bin Laden."

O'Mara noted that Obama took time to acknowledge the emotion for victims of 9/11 nearly a decade after the attacks.

"Obama's speaking almost within a decade of 9/11 so it's much more raw," she said.

Obama, in a measured and somber tone, said in his nine-minute speech: "It was nearly 10 years ago that a bright September day was darkened by the worst attack on the American people in our history." 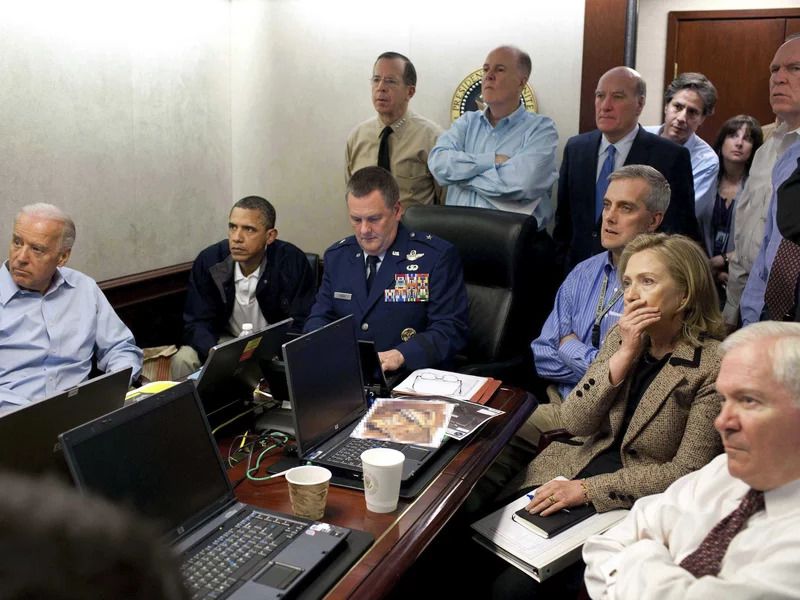 In this image released by the White House and digitally altered by the source to diffuse the paper in front of Secretary of State Hillary Rodham Clinton, President Barack Obama and then-Vice President Joe Biden, along with with members of the national security team, receive an update on the mission against Osama bin Laden in the Situation Room of the White House on May 1, 2011.

He went on to say: "And yet we know that the worst images are those that were unseen to the world. The empty seat at the dinner table. Children who were forced to grow up without their mother or their father. Parents who would never know the feeling of their child's embrace. Nearly 3,000 citizens taken from us, leaving a gaping hole in our hearts."

Obama also carefully described how the White House came to receive intelligence on bin Laden and a short description of the steps special forces took to kill him.

"There's no question that watching Obama, you got reminded of how deliberative and almost academic his style could be in discussing things," Schwartz noted. 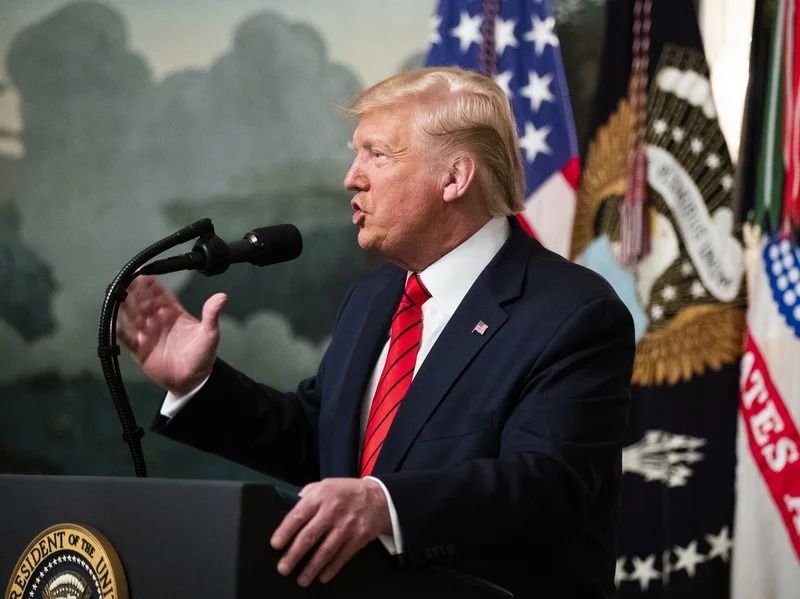 Former President Donald Trump speaks on Oct. 27, 2019 in the Diplomatic Room of the White House, announcing that Abu Bakr al-Baghdadi, the leader of the Islamic State group, is dead after being targeted by a U.S. military raid in Syria.

Taking a moment to analyze Trump's speech in comparison to Obama and Biden provides "a window into a lot of things," O'Mara said.

"In kind of a very blunt way, it's a window into how Trump was such a very different president — and not just different from the two men who were on either side of him, but modern presidents generally," she said. "If you dial back and look at presidential oratory of presidents of both parties, it's very different in terms of not only the tone, but what type of information is being relayed."

Trump, known for lengthy rally speeches during his presidency, spoke for far longer than Obama or Biden in this announcement. His initial speech went on for over eight minutes, but he went on to take questions from reporters for another 40 minutes.

And with his usual flair, Trump spoke about the raid in dramatic detail using emotive language to describe both al-Baghdadi and the manner in which he died.

"No personnel were lost in the operation, while a large number of Baghdadi's fighters and companions were killed with him. He died after running into a dead-end tunnel, whimpering and crying and screaming all the way," Trump said.

He went on describing the operation, saying, "The thug who tried so hard to intimidate others spent his last moments in utter fear, in total panic and dread, terrified of the American forces bearing down on him."

This goes back to Trump's background not in politics, but as a businessman and reality TV star, these experts noted.

"One of the things that was very noteworthy about Trump's presidential rhetoric was that he claimed to not want to use it, he said that he didn't want to be presidential," said Jennifer Mercieca, a historian of American political rhetoric and professor at Texas A&M University. "He thought that presidential [style] was boring and lame and he thought that he won the office of the presidency by being dynamic and interesting. And so that's, I think, very clearly reflected." 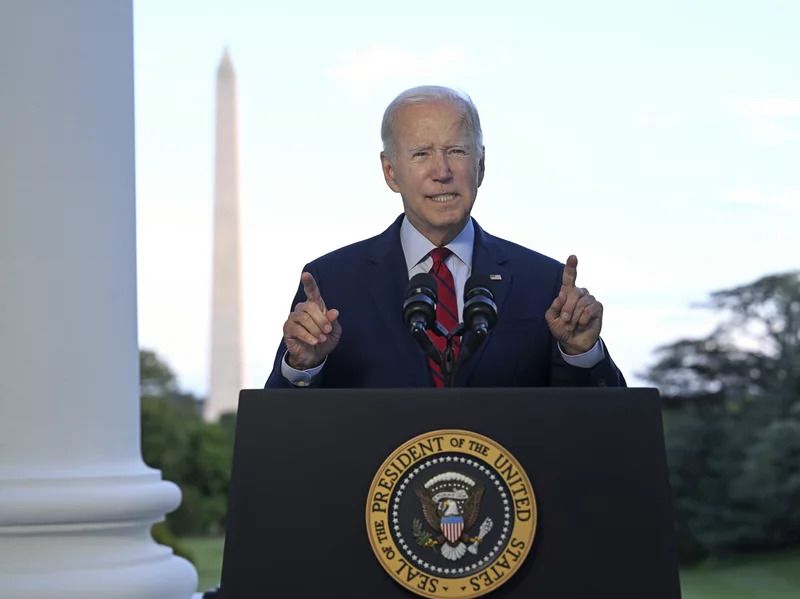 President Biden speaks from the Blue Room Balcony of the White House on Monday as he announces that a U.S. drone strike killed al-Qaida leader Ayman al-Zawahiri in Afghanistan.

Biden is known to struggle with blunders and flubs in speeches. He's even sometimes said the opposite of what he means, as noted by a New York Times piece during the 2020 presidential campaign.

For the announcement regarding the killing of al-Zawahiri, Biden (like the two presidents before him) wanted to communicate strength and power, Schwartz said.

Both Obama and Biden showed restraint in the language and description used to explain the killing of al-Zawahiri and bin Laden, Mercieca said.

Both men used the office of the president to sound official and to talk about justice owed to victims of 9/11.

Biden said of al-Zawahiri: "He carved a trail of murder and violence against American citizens, American service members, American diplomats, and American interests. And since the United States delivered justice to bin Laden 11 years ago, Zawahiri has been a leader of al Qaeda — the leader."

He added: "Now justice has been delivered, and this terrorist leader is no more."

Presidents do this to "sort of elevate what could be a very crass event, which is that the United States has exacted revenge and murdered someone else," Mercieca said.

"What Donald Trump did was the opposite. He didn't try to elevate it," she said. "Instead, he called the person a 'dog,' he very crudely described how they died, and what it meant."