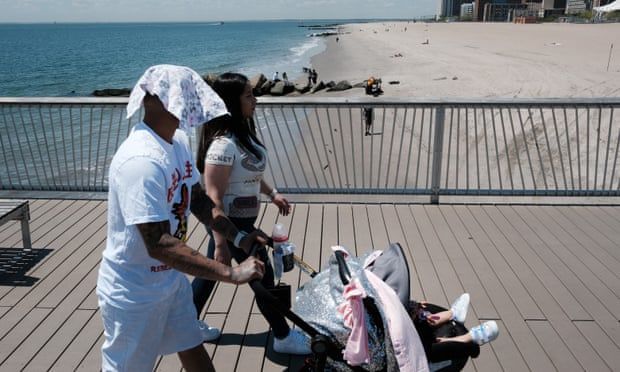 Historic heatwave poised to hit dozens of US states this weekend

Temperatures expected to be 20F to 30F above average for this time of year, breaking records and raising health fears
Dozens of states across the US are bracing for historically high spring temperatures this weekend, as a scorching heatwave moves east.

The early onslaught of sweltering weather, before what’s expected to be another hot, dry summer, is forecast to break or tie roughly 130 heat records for this time of year, with temperatures between 20F and 30F above average in the mid-Atlantic and north-east.

More than 120 million Americans are expected to be affected by the punishing heat, raising fears of health risks for the most vulnerable, outdoor workers and those who do not have access to indoor cooling. The National Weather Service issued a special statement cautioning residents to remain vigilant for signs of heat illness, take breaks inside when possible, and stay hydrated.

“Coming out of winter and the cooler temperatures, it could be a shock to the system, especially if you are spending extended periods outside,” said Marc Chenard, a meteorologist with the National Weather Service’s Weather Prediction Center, noting that the unseasonable escalation in temperatures might catch some areas off-guard, when there might otherwise be more infrastructure available providing shelter and other resources. “It is a little early so everything might not quite be where it would be if we were in the middle of summer,” he said. “It is really these first couple events when everyone is getting used to it and just understanding what they need to do.”

Records are expected to be broken in large swaths of the east, including in Washington DC, forecast to hit 96F on Saturday, and in Boston, which could get up to 93F.

Already, Texas has been pummeled by the heat, which delivered Dallas’s hottest May in history, and the south-west has cooked as strong winds fanned wildfire risks throughout the drought-stricken region.

Heat is a silent killer, often responsible for more deaths than higher-profile disasters like floods, hurricanes or tornadoes, and the rising toll is expected to worsen as the world warms.

The climate crisis has set the stage for increasing and intensifying heatwaves in the coming decades, and models indicate that there could be between 25 and 30 extreme events a year by mid-century – up from an average of between four and six a year historically. They are also expected to cover wider swaths of land regionally than before.

Although temperatures are expected to drop again after the weekend, another sizzling summer is in store. “There does seem to be a signal that it will be a warmer than average summer for the mid-Atlantic or north-east,” Chenard said, adding that how higher temperatures would translate into specific heatwaves was less clear.

As the east coast cooks this weekend, the west will get a short reprieve. Although risks remain high for wildfires across the south-west, especially in New Mexico, where the country’s biggest blaze – and the largest in state history – continues to burn, the region will get a blast of unseasonably cold weather. Parts of Colorado, which had temperatures hovering near the 90s, are now expecting to be pummeled with snow.

Accompanied by gusty winds, the system will deliver “a dramatic drop of temperatures”, according to the National Weather Service, which has forecast a shift from oppressive heat to freezing temperatures across the central high plains.

The systems causing the weather whiplash on each side of the country are separate but connected. “When one part of the country is well above normal, somewhere else is getting that other end of the wave,” Chenard said. “In that sense there is a connection, but it is not the same specific weather system.”

The blast of cold won’t be enough to extinguish wildfire threats farther west, the NWS reported, as “a critical fire risk remains in effect for much of New Mexico, Colorado, southern Utah and northern Arizona today as windy/dry conditions fuel the fire threat”.
Add Comment