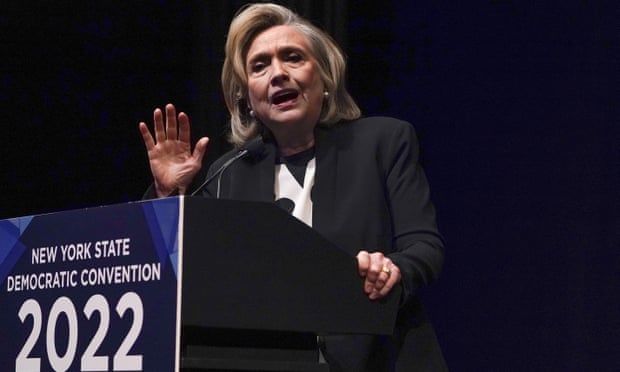 Hillary Clinton has called on Democrats “to do a better job” of selling themselves to America’s voters to avoid humiliation in this year’s midterm elections where Republicans are widely expected to perform strongly and likely grab control of Congress.

The former Democratic presidential candidate was speaking frankly on NBC’s Meet the Press on Sunday, saying she thought last summer’s chaotic US withdrawal from Afghanistan was harmful to Joe Biden. The US president’s approval ratings have slumped in recent weeks to the lowest level since he took office.

“I don’t think it helped, that is obviously the case,” Clinton, the former New York senator and secretary of state, told host Chuck Todd when asked if she thought Biden’s political troubles started with Afghanistan.

“But there are a lot of good accomplishments to be putting up on the board. And the Democrats in office and out need to be doing a better job of making the case.”

“The best politics is doing the best job that you can do. And there’s a lot that Democrats can talk about in these upcoming midterms. We’ve got a great story to tell. And we need to get out there and do a better job of telling it.”

Clinton believes that Democrats are holding themselves back by constant introspection, which she said was “always the chorus in Democratic party politics.”

“Hand wringing is part of the Democratic DNA. That seems to be in style whether we’re in or out of power. We’re in power and there still is hand wringing going on,” she said.

“But from my perspective, President Biden is doing a very good job… his handling of Ukraine, passing the American rescue package, the huge infrastructure package.

“I’m not quite sure what the disconnect is between the accomplishments of the administration, and this Congress, and the understanding of what’s been done, and the impact it will have on the American public, and some of the polling and the ongoing hand wringing.”

Clinton also had criticism for Republicans, whom she said were experiencing “an even greater disconnect” than her own party.

Democrats, she said, need to be “standing up to the other side with their craziness and their calls for impunity and nuttiness that we hear coming from them. I don’t think the average American, frankly, wants to be governed by people who live in a totally different reality.”

Todd questioned Clinton about Russian president Vladimir Putin, who was hostile towards her when she was Barack Obama’s secretary of state, and whose support for her 2016 presidential opponent Donald Trump, some believe, was partly fueled by his hatred for her.

“We are seeing very clearly the threat that he poses, not just to Ukraine, as we can watch every night on our news, but really, to Europe, to democracy, and the global stability that we thought we were building in the last 20 years,” she said.

“I would not allow Russia back into the organizations it has been a part of. There is a G20 event later in the year. I would not permit Russia to attend, and if they insisted on literally showing up I would hope there would be a significant, if not total, boycott.”