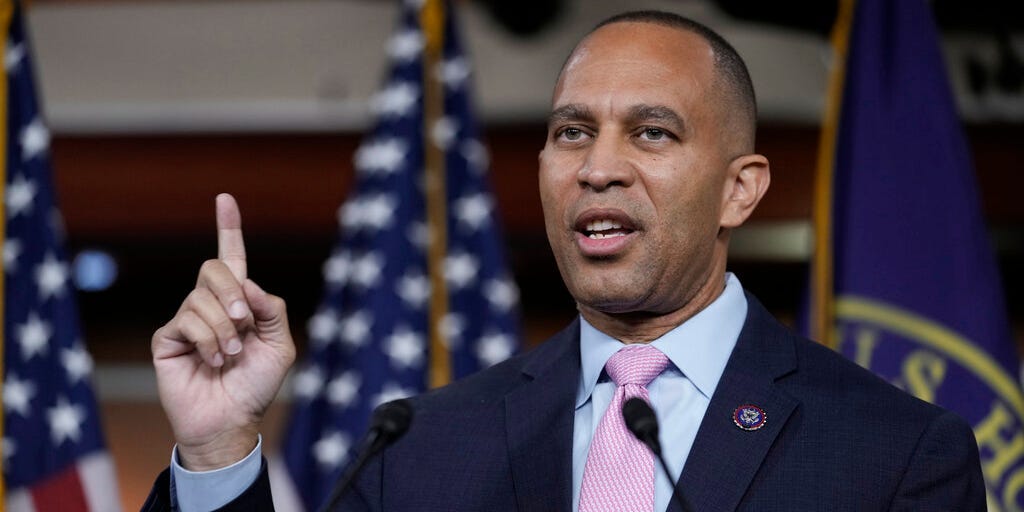 During a CNN interview, the New York lawmaker — who will succeed Speaker Nancy Pelosi of California in January in taking over the reins of the House Democratic caucus — said it was "unfortunate" that McConnell called him out on the Senate floor on Thursday over his critiques regarding the 2016 presidential election.

"That didn't seem to make a lot of sense to me. But he'll do what he does, and I want to stay focused on fighting for the people," he continued.

McConnell, who was once a political ally of Trump before condemning the former president over his conduct on January 6, 2021, blasted Jeffries during a Senate speech in advance of the native Brooklynite assuming his new role in the coming weeks.

"Many of the same individuals and institutions on the political left who spent the years 2017 through 2020 yelling about the importance of norms and institutions have themselves not hesitated to undermine our institutions when they're unhappy with a given outcome," McConnell said. "For example, the newly-elected incoming leader of the House Democrats is a past election denier who baselessly said the 2016 election was 'illegitimate' and suggested that we had a 'fake' president. He has also mounted reckless attacks on our independent judiciary and said that Justices he didn't like have, 'zero legitimacy.'"

"Unfortunately, when it comes to attacking our independent judiciary, the Democrats' new leader isn't an outlier, he's a representative sample," the GOP leader added.

Jeffries responded to McConnell's statements during a Sunday interview on ABC's "This Week" with George Stephanopoulos, arguing that while he spoke out against Trump's election, he didn't reject the certification of the 2016 contest where the Republican defeated former Secretary of State Hillary Clinton.

"Well, here's the Republican playbook, facts don't matter, hypocrisy is not a constraint to their behavior. And, in many cases, they believe that shamelessness is a superpower," the congressman told Stephanopoulos.

"My view of the situation has been pretty clear. I supported the certification of Donald Trump's election," he continued to say. "I attended his inauguration even though there were many constituents and others across the country pushing me and others to do otherwise, and found ways to work with the Trump administration, being the lead Democrat in negotiating historic criminal justice reform. That track record speaks for itself."
#Donald Trump
Add Comment