Several people were shot and one person was reported to have been killed during the rallies.

Thousands of people in the crisis-torn Haiti have taken to the streets of the capital Port-au-Prince against the government’s decision to seek foreign military assistance to quell gang-related violence, with police using tear gas to disperse protesters.

Demonstrators on Monday shouted against the “foreign occupation” and demanded the resignation of Prime Minister Ariel Henry, who on Friday asked international partners for “the immediate deployment of a specialised armed force, in sufficient quantity” to stop the “criminal actions” of armed gangs across the country.

Several people were shot and one person was reported to have been killed during the rallies. Protesters blamed the police for the death.

“It is a crime perpetrated by the police. This young girl posed no threat. She was killed expressing her desire to live in dignity,” a protester, who declined to give his name, told AFP news agency.

“We certainly need help to develop our country, but we don’t need boots [on the ground]”, another protester said, charging that the international community was “interfering in the internal affairs of Haiti” and that the government had “no legitimacy to ask for military assistance”.

UN Secretary-General Antonio Guterres called on Monday for the immediate deployment of a special international force in Haiti to help the Caribbean state, which has been facing a biting fuel and water shortage. 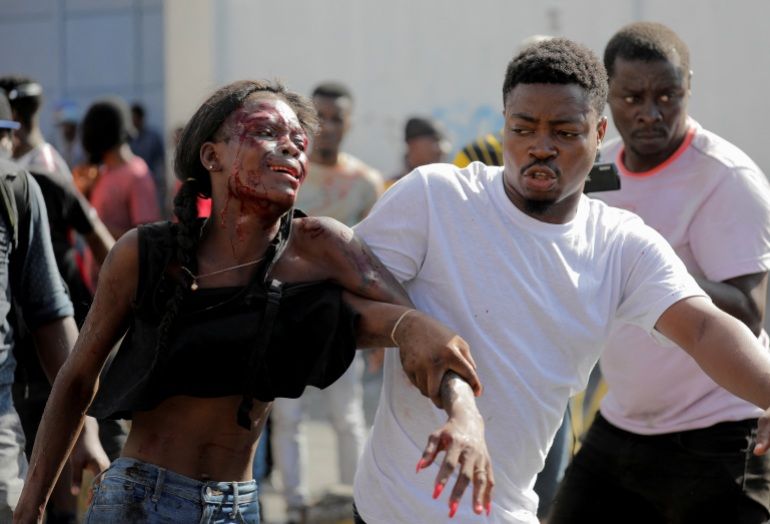 A man helps a woman with blood on her face during a protest demanding the resignation of Haiti’s Prime Minister Ariel Henry after weeks of shortages, in Port-au-Prince, Haiti

Haiti’s ambassador to the United States also said on Monday that the US and Canada should take the lead in forming a force to confront Haitian gangs.

“We wish to see our neighbours like the United States, like Canada, take the lead and move fast,” Bocchit Edmond told Reuters.

“There is a really big threat over the head of the prime minister. If nothing is done quickly, there is a risk of another head of state (being) killed in Haiti,” he said, referring to the 2021 assassination of President Jovenel Moise.

The US on Saturday said it was reviewing Haiti’s request for support. Canada’s foreign ministry on Friday said 19 of the members of the Organization of American States were committed to helping Haitians “overcome the complex security challenges facing the country”.

Haiti’s request comes nearly a month after one of the country’s most powerful gangs surrounded a key fuel terminal in the capital of Port-au-Prince, preventing the distribution of some 10 million gallons of diesel and gasoline and more than 800,000 gallons (3.5 million litre) of kerosene stored on site. 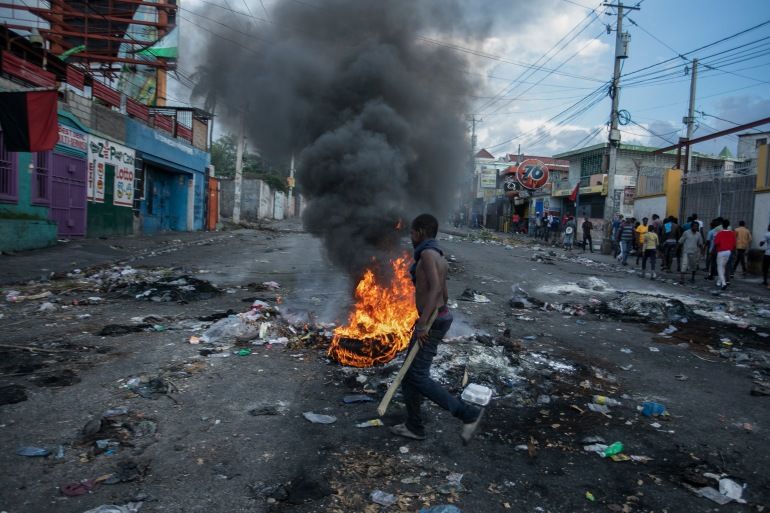 A man walks past burning tires set up by protesters demanding the resignation of Prime Minister Ariel Henry in the Delmas area of Port-au-Prince, October 10, 2022

Many Haitians have rejected the idea of another international intervention, noting that UN peacekeepers were accused of sexual assault and sparked a cholera epidemic more than a decade ago that killed nearly 10,000 people.

“It is unconstitutional and an act against the demands of the Haitian people,” said Port-au-Prince resident Josue Merilein.

Haiti’s National Police has struggled to control gangs with its limited resources and chronic understaffing, with only some 12,800 active officers in a country of more than 11 million people.

One of the poorest countries in the world, Haiti has been suffering from periodic natural disasters and a longstanding political crisis made worse after the killing of Moise. Since then gangs have only grown more powerful.

Many Haitians have demanded the resignation of Prime Minister Henry, whose government is serving in an interim capacity after he indefinitely delayed an election previously scheduled for November 2021 due to the rising political instability.

Protests and riots have broken out around Haiti since the government announced last month that it will cut fuel subsidies.