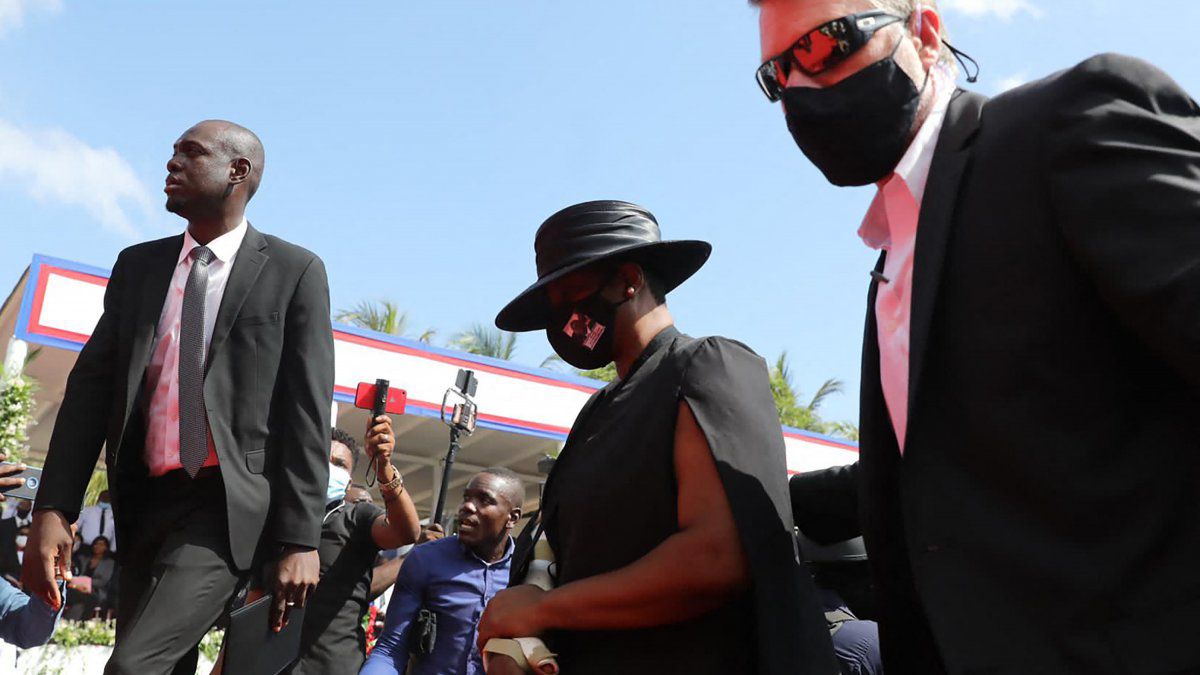 Haitian President Jovenel Moise was shot dead at his residence in Port-au-Prince in the early morning of July 7.
The first lady of Haiti, Martine Moise, asked this Friday for justice for the assassinated president of the country, Jovenel Moise, who, she said, "was abandoned and betrayed."

"You were abandoned and betrayed. Your murder exposed (the) ugliness and cowardice," Martine said at the civil ceremony in honor of Moise held in Cap-Haitien, in the north of the impoverished Caribbean country, where he will be buried this Friday.

The woman said that "the greatest sin" of Jovenel Moise was "to love his country. Defend the weakest against the greed of others".

"You were brutally murdered. They conspired against you. They hated you, they threw poison at you," Martine said visibly affected.

She affirmed that "the birds of prey" that killed her husband on July 7 "are still running through the streets. They are not even hiding. They are there watching us and listening to us."

The woman called to prevent "the blood of our president from spilling in vain."

"We do not want revenge, nor violence. We will not give in to fear. We will look them (the murderers) directly in the eyes. We will tell them that enough is enough," she added.

The family "is going through dark days," said Martine Moise, who was shot and wounded in the gun attack on her husband at their private residence in Port-au-Prince.

The first lady of Haiti spoke for 15 minutes about her 25-year relationship with the late ruler, whom she discovered as "passionate and determined, kind, cheerful and with great charisma."

"He became my anthem and I became his orchestra," she said, recounting their life together and stating that she was never prepared for her husband's death in this way.

Martine said she did not understand "how power envy and vulnerability could lead to such malice against" her husband.

"He always tried to do more and better," added Martine Moise, who described the Haitian political system as "rotten and unfair", while ensuring that the president wanted "to leave the presidency with clean and pure hands."

Jovenel Moise "was found overnight with the whole system in front of him. He was treated with all kinds of evils," she said.

According to Martine, "all means - including media networks and microphones - have been used to destroy her husband" as president.

"Jovenel, my love, what will become of me without you. Go in peace, go with the sense of duty fulfilled. Let your soul rest in peace, we will take care of the rest," he warned.

"It is a goodbye but not a farewell. I did not think that this change you wanted to make could lead to your assassination. The oligarchs have won a battle. We have lost a battle, but the war is not over yet," she insisted.

The president was shot dead at his residence in Port-au-Prince in the early morning of July 7, in an attack by an armed commando made up of former Colombian military personnel that entered the presidential home without encountering resistance from the guards who should have protected the life of the president.