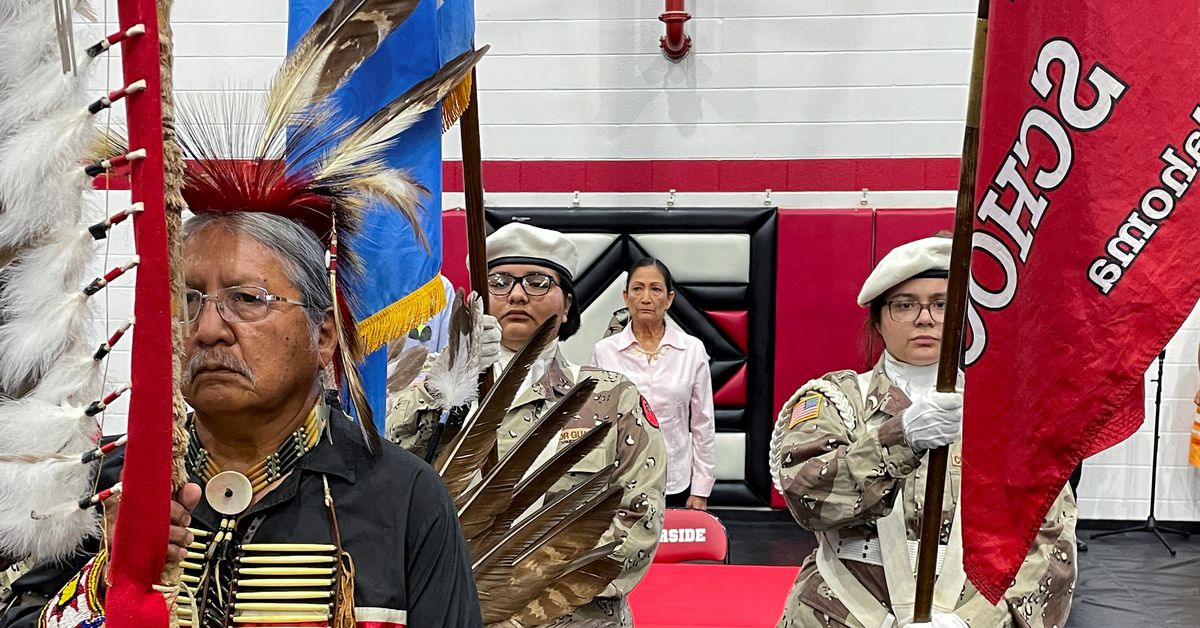 U.S. Interior Secretary Deb Haaland said on Friday she is racing to reveal as much history as possible about abuses within the old Native American boarding school system, which separated generations of children from their families in an attempt to destroy indigenous culture.
Haaland, the first Native American woman to serve as cabinet secretary, told Reuters in a phone interview that no single investigation can recover all that was lost during the brutal period of the boarding schools.

They operated from the early 1800s through the 1970s. Such schools were centers of forced assimilation, with the stated goal of wiping out Native American culture.

Haaland released an initial report from the Interior Department's continuing investigation into the history the boarding schools in May.

"We've had a very brutal and vicious history in this country. This is one piece of it," Haaland said. "We're working our hearts out every single day to get (the investigation) to the point where it's more finished than unfinished."

The secretary said repairing what the boarding school system did means recovering what was lost: language, education, housing, healthcare and security through better law enforcement.

"All of those things, we're working toward, and for me, if we can live up to those obligations, that will be justice," she said.

The May report from her department included recommendations for funding programs to preserve Native American languages.

Haaland last weekend began a year-long listening tour to hear from survivors of boarding schools about the abuses they endured.

"That's important. For native folks who felt invisible for so many centuries, decades and years, having the opportunity to tell of their experiences with a cabinet member sitting right there, it helps them to get it out of their hearts and onto healing," Haaland said.

Conditions at former Indian boarding schools gained global attention last year when tribal leaders in Canada announced the discovery of hundreds of unmarked graves of children at the sites of residential school for indigenous children, as such institutions are known in Canada.

Haaland, a former Democratic Party congresswoman from New Mexico, co-authored a Congressional bill that would establish a Truth and Healing Commision, similar to one that was established in Canada in 2007 and issued its final report in 2015.

Unlike the United States, Canada carried out a full investigation into its schools via its Truth and Reconciliation Commission. The U.S. government has never acknowledged how many children attended such schools, how many children died or went missing from them or even how many schools existed.

A version of Haaland's bill is still winding its way through Congress. She said its passage was critical to creating an all-of-government approach to addressing a system Native Americans widely blame for creating multiple generations of essentially parentless children raised by abusive institutions, decimating family structures and healthy tribal culture.

The Congressional bill would also give a Truth and Healing Commission subpoena powers, which the Interior Department does not have for its own investigation, to force the churches and other institutions that often ran the boarding schools to turn over internal documents.

"That would be a game changer," Haaland said.
Add Comment