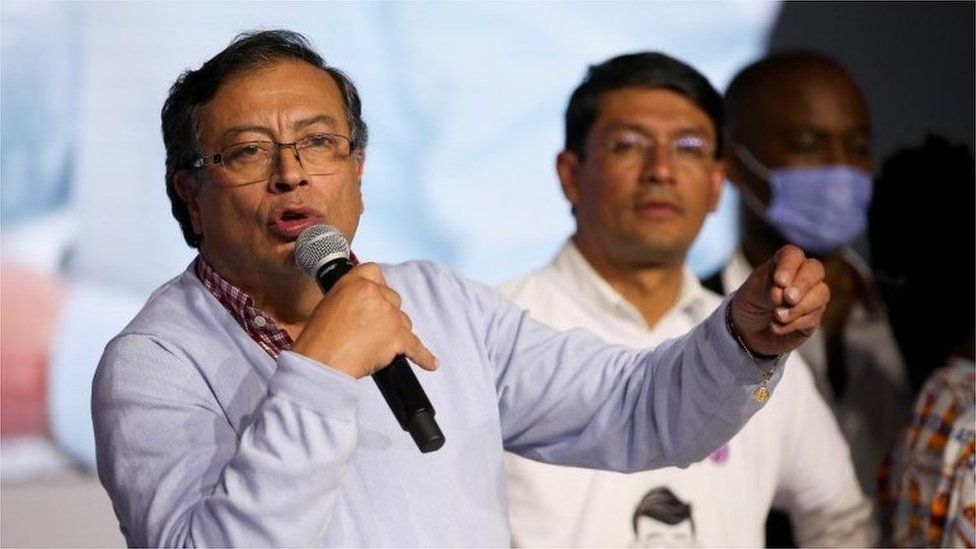 Colombian Senator Gustavo Petro, who polls suggest is the favourite to win May's presidential election, has secured the nomination of the left-wing Historic Pact coalition.
Mr Petro, a former guerrilla with the M-19 rebel group, won Sunday's primary by a wide margin.

He will face five other candidates in the presidential election on 29 May.

Were he to win, Mr Petro would become the first left-wing president to lead the South American nation.

The 61-year-old ran for president in 2018 but was defeated by the right-wing candidate Iván Duque.

Since 2015, presidents in Colombia have been restricted to a single four-year term in office, so Mr Duque will not be able to stand in this election. His Democratic Centre party has put Óscar Zuluaga forward as its presidential candidate instead.

As well as the Historic Pact, two more coalitions held primaries on Sunday.

They will be joined in the race for the presidency by Ingrid Betancourt, who was held hostage by Farc rebels for more than six years, and Rodolfo Hernández, who is standing for the Anticorruption League.

Polls suggest that Mr Petro has a wide lead over the other candidates, with some suggesting he could get enough votes to win outright in the first round on 29 May.

Many Colombians say they are fed up with their elected leaders and the way the country has been run in recent years.

The country was rocked by weeks of anti-government protests last year, during which dozens of protesters died.

Many of those protesting said they were angry about high levels of inequality in Colombia, and some of them have been drawn to Mr Petro's campaign promise to redistribute wealth.

But his past as a member of the now-disbanded M-19 rebel left-wing group makes him unpalatable to voters who argue that many of Colombia's problems stem from the war different guerrilla groups have been waging against the state.
Add Comment