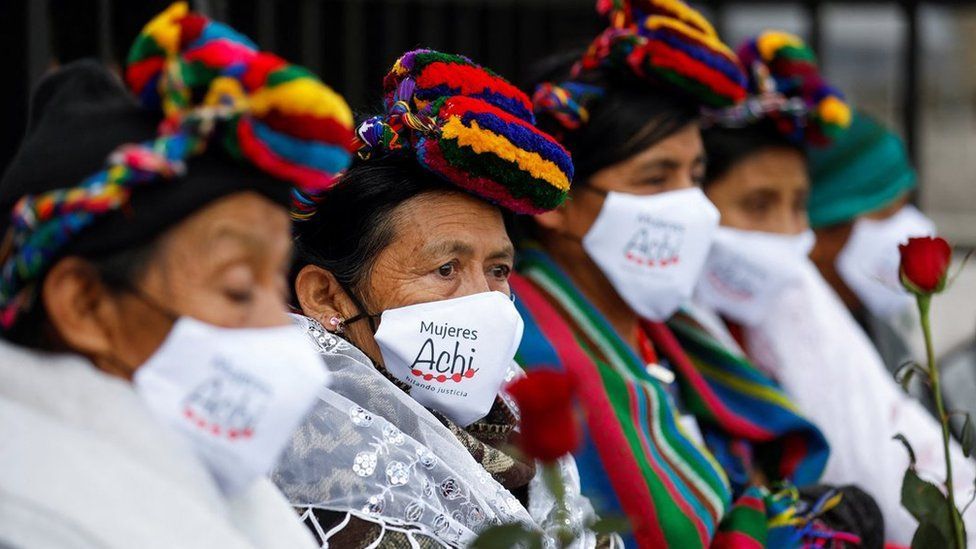 Guatemala's highest court has sentenced five former paramilitaries to 30 years in prison for raping dozens of indigenous Maya women during the country's civil war in the 1980s.
The men were members of so-called Civil Self-Defence Patrols, armed groups formed and supported by the military.

The 36 victims were aged 12-52 when the crimes happened, prosecutors said.

"There were massacres. Many women were raped," said Antonina Vale, a survivor. "It's the pain we have in our hearts."

Around 200,000 people were killed or disappeared in the 1960-1996 conflict. Most of them were members of indigenous groups, who were targeted by the army and right-wing paramilitaries, accused of supporting left-wing guerrillas.

The three-week trial at the Supreme Court in the capital, Guatemala City, included testimony from survivors and relatives of the victims of the Achi indigenous group.

The rapes, they said, happened around the village of Rabinal, north of the capital. The area, which was targeted heavily during the war, is the site of a mass grave with the bodies of more than 3,000 people.

Judge Gervi Sical said the sentences had been handed down for crimes against humanity. The accused "disappeared" all the men from the village, and then raped, tied up and threatened the women, he was quoted by Reuters news agency as saying. After being raped, they were urinated on.

Speaking outside the courthouse, Ms Vale said she was pregnant when she was raped, and that the child had later died. "I asked the paramilitaries to spare me but they didn't listen to me," she said. "What happened to our lives and our bodies is not fair."

The five men heard the verdict via videoconference from the jail where they are being held.

The UN High Commissioner for Human Rights in Guatemala said the sentence was a "landmark advance in the access to the rights to truth, justice and reparation for female victims of sexual violence during" the war.

In 2016, two ex-military members were sentenced to a combined 360 years in jail for the murder, rape and sexual enslavement of indigenous women of Maya origin.
Add Comment